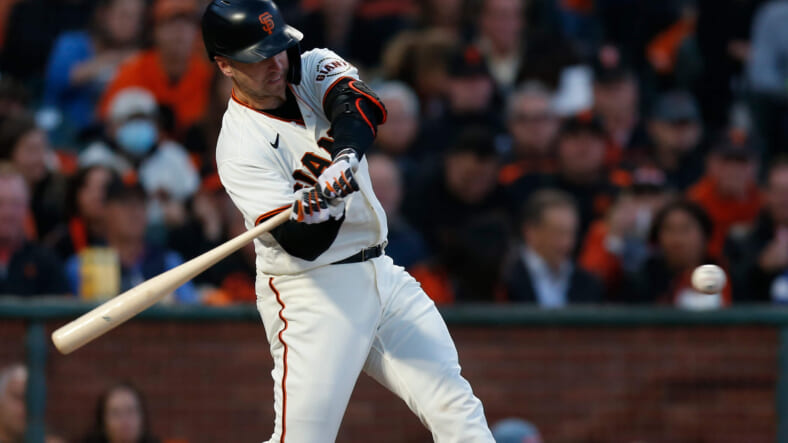 New York Yankees catcher Gary Sanchez has one more season of arbitration eligibility before he becomes a free agent on the open market. At this point in time, Sanchez doesnâ€™t seem to be the long-term solution at catcher for the Bombers, as he posted a .204 batting average with 23 homers last season.

At 28-years-old, Sanchez has struggled considerably as a hitter, and his defense has been inconsistent as well. He did seem a bit more comfortable behind the plate this year but did allow just eight passed balls over nearly 900 innings. Back in 2018, he contributed 18 passed balls in 653 innings, so his defensive qualities have elevated to a degree.

However, he allowed a career-high 50 stolen bases this past season with a 17% caught stealing percentage, the lowest of his career. With just one year left on his contract, the Yankees might feel it necessary to bring in a veteran with solid defensive traits and a calm mindset as a batter.

NJ.com proposed the idea of the Yankees targeting Buster Posey. Per the San Francisco Chronicle:

Sure, heâ€™ll be 35 and playing a position that becomes ever more demanding with age, but … his leadership skills and contagious calm are off the charts, he imparts confidence to the pitchers and the rest of the lineup, and his pitch calling and framing are as good as ever. The Giants demonstrated that care with his playing time can keep him fresh throughout a long season, and Posey demonstrated that â€” with a fully healthy hip â€” he still can hit like a kid.

As stated, Posey will be 35-years-old but is coming off a season where he hit .304 with 18 homers and 56 RBIs. He earned an All-Star award and also contributes solid defense. Posey allow just two passed balls over 892 innings, posting a 31% strikeout rate, allowing 31 stolen bases. Despite Posey being about seven years older than Sanchez, he still presents a far more efficient option.

Having been coined an MVP, seven-time All-Star, and Gold Glove award-winning player, the Yankees might be able to spend a bit of cash on Posey if San Francisco elects to decline his $22 million club option for the 2022 season.