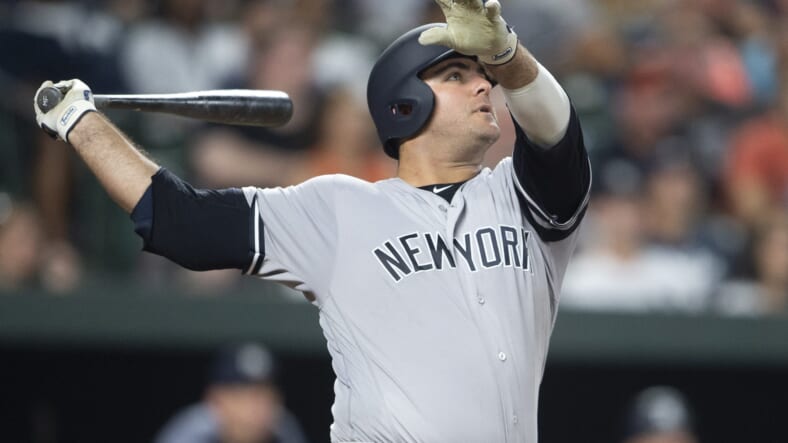 Yankees’ Clint Frazier making the case with his bat:

This year rosters around baseball will expand from the traditional 25 to 26 players, and Clint Frazier wants that spot.Â  Frazier, so far in the last two years, has had a checkered time with the big team.Â  At times ablaze at the plate and at times a little leaguer in the outfield.Â  There is no question that Frazier is a formidable force with his quick swinging bat. He slashed .267/.317/.489, with 12 home runs in 225 at-bats in 2019.Â  Where Frazier has to prove himself is in his defense.Â  This season may be his last chance to prove to the Yankees that he belongs at the major league level.Â

Several players, including Manager Aaron Boone, believes in Frazier.Â  Boone said: “Fraz has the chance to be a great player in this league, we want to be there for him, continue to help him grow in this game.” How much playing time if he makes the team will depend on the health of the outfield with Aaron Hicks still rehabbing from Tommy John Surgery, questions with Stanton durability, and a possible sore shoulder from Judge.Â  As Frazier fights for the extra spot on the roster he said:Â

â€œâ€¦So I think this spring training, if I could go out there and I do what I can do offensively and I do what I know that I can defensively, then maybe Iâ€™ll put myself in a different spot to not only focus on the 26th man.â€

When Frazier was spoken too, he seemed to want to talk about baseball and not his run-ins with reporters or any other distractions he may have caused.

â€œBut I also believe that if I lose who I am, it probably affects you on the field, and thatâ€™s the biggest thing, is trying to be yourself without becoming a distraction. And as we all know, distractions can linger. And I donâ€™t want to go through distractions. I donâ€™t want to deal with that anymoreâ€¦.Iâ€™m here to have people just talk about baseball. I donâ€™t need the rest of the stuff. This isnâ€™t the Yankeesâ€™ reality TV show.â€

So far, Frazier has shown that his offseason work to improve his outfield play, may have had an impact.Â  With Aaron Judge yet to start playing, Clint has been playing right field with no errors.Â  He also has made an offseason adjustment in his stance at the plate.Â  He claims the new left heal up position gives him more control.Â  In yesterday’s game against the Rays, he homered over the stands in left field.

Tyler Wade wants to be a full-time player:

Tyler Dean Wade is 25 years old this year, and after doing the New York Scranton shuttle for the last few years, he would like to remain at Yankee Stadium as a full-time player. He has a good case for that this year, possibly his best suit to keep wearing the pinstripes.Â  Yankees scouts took notice of Wade and particularly liked his athleticism. They thought so much of him that they selected him in the fourth round of the 2013 MLB draft when he was just eighteen.

He made his pro debut in the rookie Gulf Coast League. At the end of the season, he was batting .309 with 12 RBI’s and the Yankees promoted him to the Staten Island Yankees. In the same year, he also played at the Charleston River Dogs and for the Trenton Thunder. He ended playing in 129 games for an average of .273 with 51 RBI’s.Â  He started 2015 with the Tampa A team but ended the season back with the Thunder. Between the two teams, he played in 127 games for an average of .262 with 31 RBI’s and with three home runs. He was an invitee to 2016 spring training but spent the season with the Thunder.

Wade made his major league debut on June 27, 2017, but found himself on that shuttle back and forth.Â  He hit .310 for the Rail Riders but .155 for the Yankees in just 30 games. During the 2018 season, he was back and forth between the teams again. During the winter, he played in the Arizona fall league, where he worked on his outfield skills.Â Â  He started the 2019 season with the Rail Riders but has been up and down again. While at Scranton, Wade has been honing his outfield skills while his natural position is shortstop. As it turns out, Wade has progressed into a “Super Utility Player” even playing second base. He still isn’t the greatest hitter.

Last season, he had his best batting average at the stadiumÂ  .247, which is a 20% increase from 2018.Â  That appears to be a trend as he has improved that average 20% each year, if he continues at that rate, it is reasonable to assume he will be in the well over a .277 average, and the Yankees would be pleased with that.Â  The only thing that has been holding him back is his lack of hitting.Â  For the Yankees, Wade provides a player that can play anywhere in the outfield with more than adequate defense.Â  He can back up DJ LeMahieu to give him some rest for what the Yankees feel will be a very long season.Â  Maybe most importantly, Wade is a shortstop who can certainly replace Gleyber Torres, should he need rest or have an injury.Â  Add to that he is the fastest Yankee on the base paths.Â  In spring training so far, he is showing off his stuff, stealing three bases, and Yesterday he hit a home run out of George M. Steinbrenner Field.

In yesterday’s game in Tampa, Mike Ford reminded the front office that he was here and wants to stay here.Â  Ford will be fighting for that first base job that he will likely lose to Luke Voit.Â  So the only way he can impress is through his bat.Â  Ford spent seven years in the minor leagues between the Yankees and Mariners. For the Yankees, he played in the minors for Staten Island, Trenton Thunder, The River Dogs, Tampa, and Scranton Wilkes/Barre. In the 2012 Ford when undrafted and signed with the Yankees as an undrafted free agent. He spent that whole year with the Staten Island Yankees.

In 2014 while with the River Dogs, Ford hit four home runs in one game. He was later promoted to Tampa, where he was named an All-Star for the Florida State League. In the winter of 2017, he was selected in the Rule 5 draft by the Seattle Mariners, but in March of 2018, he was returned to the Yankees.Â  At the start of 2019, Ford was invited to spring training as a non-roster player. He was eventually assigned to the Rail Riders but got his big break when he was called up to the majors when Greg Bird was injured. He made his major league debut in April and got his first hit on April 21. He hit his first home run on April 23rd. He traveled back and forth from Scranton to the Stadium several times during the year.

With all the Yankee injuries, Ford found himself playing in the last 52 games of the season.Â  His batting average was .259, but what impressed manager Boone more than anything else was his power.Â  He, in that short span the hit 12 home runs, that’s a home run in every four games.Â Â  (that’s 40 home runs for a full season). Yesterday in Tampa, he smashed a home run well into the centerfield stands.Â  Playing in just a few innings and only three games in spring training, that home run may power him into that 26th roster spot.