Yankeesâ€™ Clint Frazier may be getting too passive at the plate 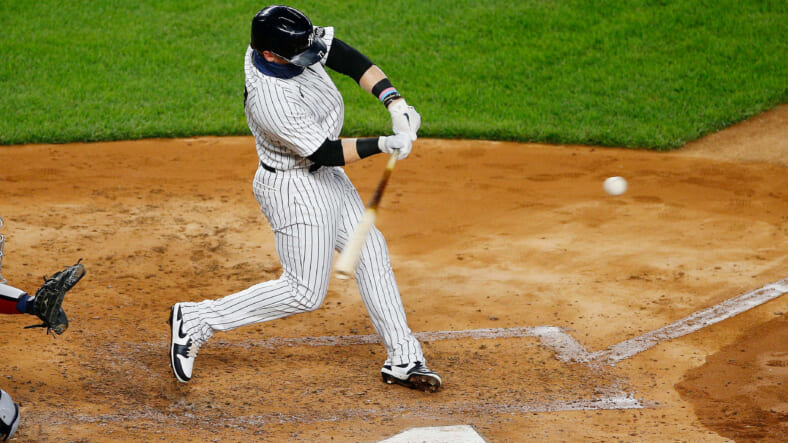 Itâ€™s not a secret that the New York Yankees have been struggling to get going in the batterâ€™s box to start the season. Outfielder Clint Frazier has been one of the several Bombers in a prolonged slump: after Fridayâ€™s game, he was hitting .156.

On Friday against Cleveland, Frazier was 0-for-2, so results-wise, anything changed. But the Yankeesâ€™ left fielder did walk twice and was close to hitting a two-run shot, but was just short of clearing the wall.

Frazier struck that ball at 106 miles per hour and, according to Statcast, it had an expected batting average of .770.

For a player that has only one hit in his last 19 trips to the plate and owns a .483 OPS to open the campaign, any hard contact is a good sign. The well-struck ball and the two walks provide a glimpse of hope for the Yankees to get the best Frazier back at some point.

The Yankees would love to get 2020 Frazier back

Yankeesâ€™ hitting coach Marcus Thames spoke to the media before yesterdayâ€™s game, and discussed some of the teamâ€™s struggling stars.

When talking about Frazier, Thames said decision-making has been an issue.

â€œWith Clint, heâ€™s in between,â€ Thames said. â€œHeâ€™s got to get back on the fastball. I think heâ€™s doing a little bit too much. … Weâ€™ve got to see him being a little bit more aggressive because heâ€™s getting pitches to hit, but he just canâ€™t pull the trigger. So, just keeping him positive. Just letting him know what guys are trying to do to him and heâ€™s got to be committed to what his game plan is.â€

The Yankees are eager to see Frazier snap out of his funk.