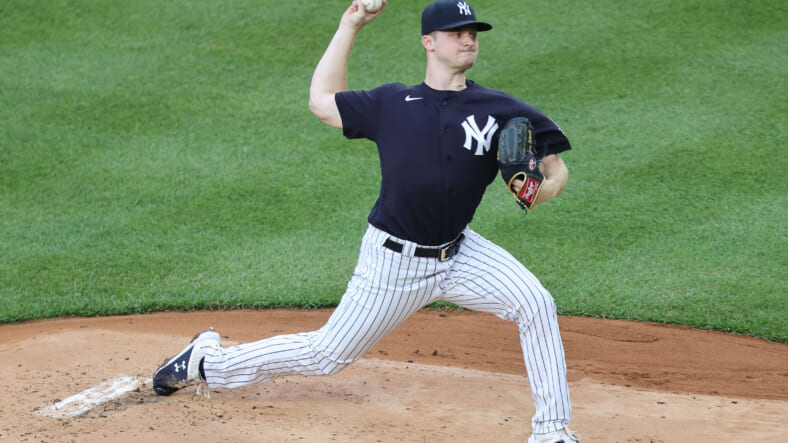 The New York Yankees are coming off their third consecutive victory and fourth win in five games against the Cleveland Indians on Saturday afternoon by a score of 2-1. While their offense still hasnâ€™t enjoyed that breakout performance, their pitching has been stellar, with Gerrit Cole lasting seven innings in the win, recording 11 strikeouts, and allowing just one run on three hits. He currently has a 1.71 ERA this season and has already put himself in the conversation as one of the best pitchers to ever wear the pinstripes.

While he still has plenty to accomplish in pinstripes, he started off his career in New York with a bang, justifying the money they spent on him over the long haul. He has been an absolute stud, but the rest of the starting rotation has struggled to start the 2021 campaign. With Domingo German and Deivi Garcia (during spring ball) struggling during their appearances, the Yankees are still trying to iron out the back end of the rotation, which is where Clarke Schmidt enters the fold.

Schmidt experienced pain in his elbow during a throwing session a few months ago and has since been rehabilitating. He recently began playing catch, trying to correct the common flexor tendon that stunted his progression this spring. He received a cortisone shot on April 13, and while heâ€™s doing well, according to skipper Aaron Boone, he still has quite some time before seeing the mound.

â€œHeâ€™s doing well,â€ managerÂ Aaron Boone said on Saturday. â€œHeâ€™s thrown now two or three times in his catch play and each time has gone well so hopefully heâ€™s on his way now to start building up. Obviously, itâ€™s going to take a while because heâ€™s starting from scratch essentially, but heâ€™s doing well.â€

Schmidt made just three appearances last year, pitching 6.1 innings and earning a 7.11 ERA. The Yankees had big expectations for him this season, though, especially competing with German and Garcia for the fifth spot in the rotation. Instead, the team put him on the 60-day injured list, and he has been fighting his way back ever since.
Hopefully, he will offer some sort of support upon his return, as the Yankees desperately need more options in the starting rotation, and Schmidt is capable of offering quality, despite a limited sample size at the MLB level.