Yankees: Aroldis Chapmanâ€™s splitter is getting amazing results in the early going 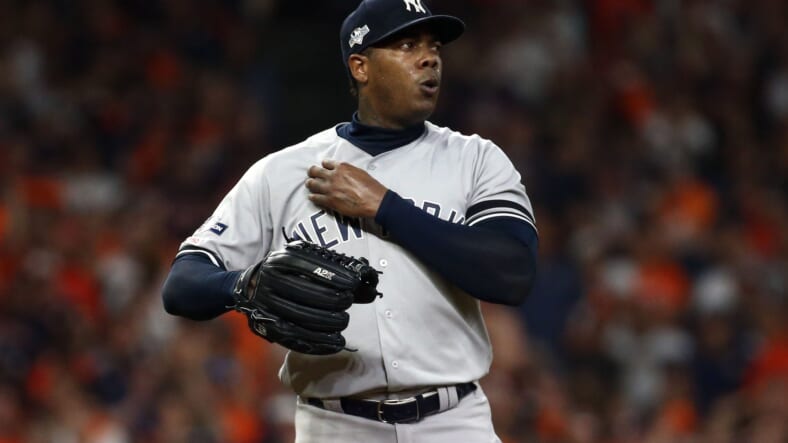 In the past, New York Yankeesâ€™ closer Aroldis Chapman has encountered a few issues in a couple of specific postseason instances. Basically, teams knew they were going to see a fastball or a slider, and the late-inning reliever can be overpowering but isnâ€™t known for having pinpoint command.

Thatâ€™s why Chapman wanted to resume using a long-lost weapon: a splitter. The Yankees certainly encouraged him, as it provides the pitcher with a third offering to go with his already great fastball-slider combo.

The Yankeesâ€™ closer worked hard during the offseason to perfect the pitch, and so far, he has been getting great results with it.

“Itâ€™s simple: I like it. I like using it,â€ Chapman said through an interpreter. â€œIt goes back to when I started pitching; unfortunately, when I was playing for the Cincinnati Reds, they didn’t like me throwing that pitch because I was younger at the time and they felt that it was unnecessary. But I’ve always liked using this pitch.â€

The Yankees encouraged Chapman to use it

â€œI think he’s becoming a more complete pitcher while also still retaining some of those elite qualities he’s had in the past,â€ Blake said. â€œIt’s been really impressive to watch so far, and hopefully we can we just continue to see more of it.â€

Chapmanâ€™s splitter has already generated five punchouts and has an 83.3 whiff rate. â€œIt goes to how comfortable I feel using the split,â€ Chapman said. â€œI couldn’t say that I’m completely surprised by the reaction of the hitters, but I am extremely happy with the results. I think it’s about using it in specific counts and certain situations. It’s something that I worked on a lot, so Iâ€™m comfortable with the pitch and definitely happy with the results.â€