Yankees are gearing up to change Oswaldo Cabrera’s position, again 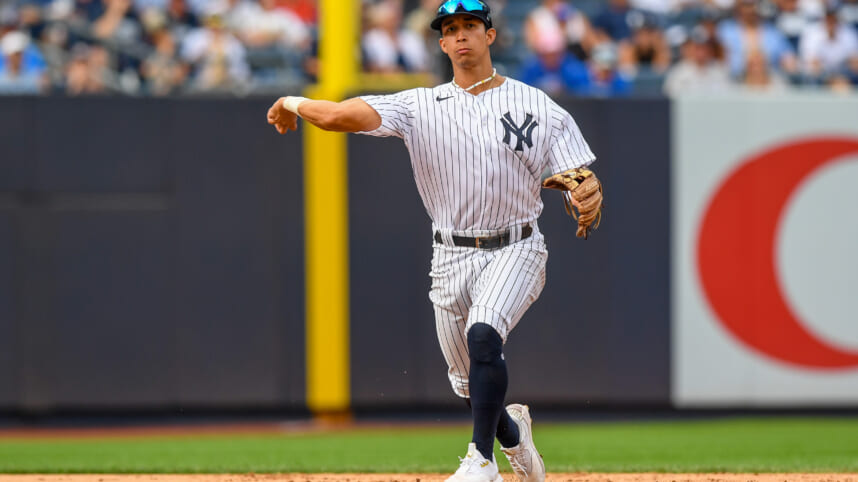 The New York Yankees have been playing Russian roulette with rookie Oswaldo Cabrera’s defensive alignments. Cabrera has already featured at four different positions, including second base, third base, shortstop, and right field.

Interestingly, his most traditional spot at second is the only place he’s committed an error, hosting a .875 fielding percentage over just 9.0 innings of play.

However, Cabrera seems to be a natural in right field, hosting a perfect fielding percentage and seven defensive runs saved above average over 118.2 innings. Featuring an accurate arm and great athleticism, manager Aaron Boone has already begun considering him their everyday option.

“He’s smart, he’s able to slow the game down for a younger player,” Boone said. “Plays the game with a lot of poise, with a lot of confidence. We’ve already thrown him into some unique situations as a rookie player and he’s handled them superbly. So it wouldn’t surprise me if he went over there and handled himself well.”

The Yankees already want to change Oswaldo Cabrera’s defensive spot if need be:

However, the Yankees are already considering changing his spot once again, especially if they need him as a result of injury. The team recently placed DJ LeMahieu on the injured list, and Anthony Rizzo is still dealing with headaches, so the team is a bit thin at first base. They DFAd Ronald Guzman Saturday morning and simply don’t trust Marwin Gonzalez to be an everyday player at this point in the season.

With that being said, Oswaldo has already begun taking reps at first base during training sessions.

“I think it’s different, way different than the other positions I play,” Cabrera said. “But it’s just about [getting] reps every day, to practice and see the game.”

Boone speaks highly about his baseball IQ and the ability to translate to other spots on the field. Cabrera has performed exceptional defense over 21 game sample size.

“Obviously Oswaldo is a pretty talented defender, but we want to have that option over there, see what it looks like, get him some reps over there just in case something comes up here over the next week where we see an avenue there,” manager Aaron Boone said prior to Friday’s game.

Playing first base is not an easy thing to do, but Cabrera isn’t shying away from the opportunity if the team needs him. The Yankees reinstated Josh Donaldson on Saturday as well, which will likely shift Peraza (or Gleyber Torres) back to second and Isiah Kiner-Falefa to shortstop. Either the Yankees can keep Cabrera in right field or have him play first on occasion.

If the team needs to give Gonzalez a day off before LeMahieu returns, they may have no choice but to move Cabrera’s position once again.