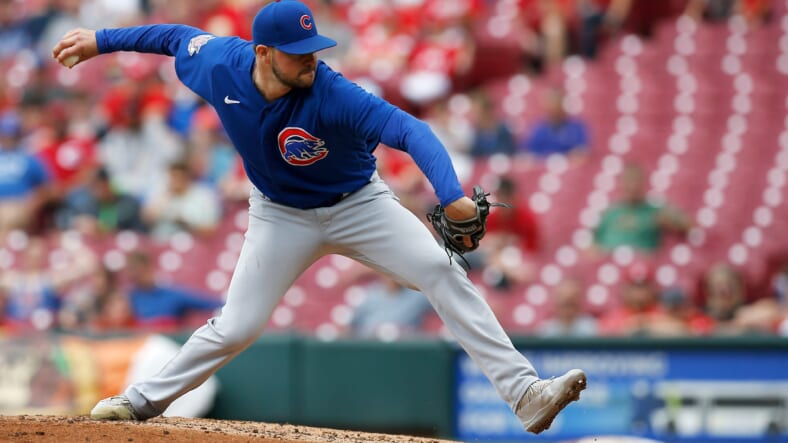 Chicago Cubs relief pitcher Scott Effross (57) throws a pitch after entering the game in the third inning of the MLB National League game between the Cincinnati Reds and the Chicago Cubs at Great American Ball Park in downtown Cincinnati on Thursday, May 26, 2022. The Reds led 10-3 after three innings. Chicago Cubs At Cincinnati Reds

Replacing Michael King was never going to be an easy challenge for the New York Yankees, but general manager Brian Cashman made an efficient move on Monday just one day before the trade deadline expires.

King featured a 2.29 ERA and 2.43 xFIP over 51 innings before suffering a fractured right elbow this year. The Yankees have been relying on a bevy of different options to help smooth over his loss, but they are getting reinforcements with Chicago Cubs star rookie relief pitcher Scott Effross.

The New York Yankees are finalizing a deal to acquire right-handed reliever Scott Effross from the Chicago Cubs, sources tell ESPN. Effross, 28, is a rookie with five more years of club control and has been fantastic this season. @JackCurryYES was on it.

What are the Yankees getting in Scott Effross?

Effross is a 28 year old side-arm bullpen piece with six years of team control left until he becomes a free agent in 2028. This is a tremendous acquisition for the Yankees, considering he holds a 2.66 ERA over 44 innings this season.

Effross also has a 2.95 xFIP and 2.79 SIERA. He pitched just 14.2 innings last season, so this is realistically his rookie campaign after spending 23 games with Chicago’s AAA affiliate in 2021 as well.

Over a solid sample size, Effross has earned 10.3 strikeouts per nine, a 63.3% left on base rate and 45.6% ground ball rate. His 5.0% HR/FB ratio is fantastic and should keep batters away from homers in Yankee Stadium. Effross primarily utilizes a slider, sinker, change-up, and 4-seam fastball sequence.

His slider stands out as a dominant pitch, utilizing it 40% of the time. Opposing batters are hitting just .157 against it with a .196 slugging percentage. His slider is generating a 30.1% WHIFF rate and 29.3% put-away rate with 24 strikeouts over 51 at bats. Hitters are batting .357 against his sinker at 90.2 mph, but he has created a 38.2% put-away rate with that specific pitch.

Clearly, pitching coach Matt Blake has identified him as a bullpen arm that could see increased efficiency with minor tweaks to his sinker. His sinker is generating 37.2 inches of vertical drop and 17.7 inches of horizontal break, both above-average among pitchers. In exchange, the Yankees gave up right-handed pitcher Hayden Wesneski, the team’s No. 7 prospect, per MLB Pipeline.

This was a solid move for the Bombers, to land a prospect who can contribute immediately in exchange for an unproven pitcher with no MLB experience.