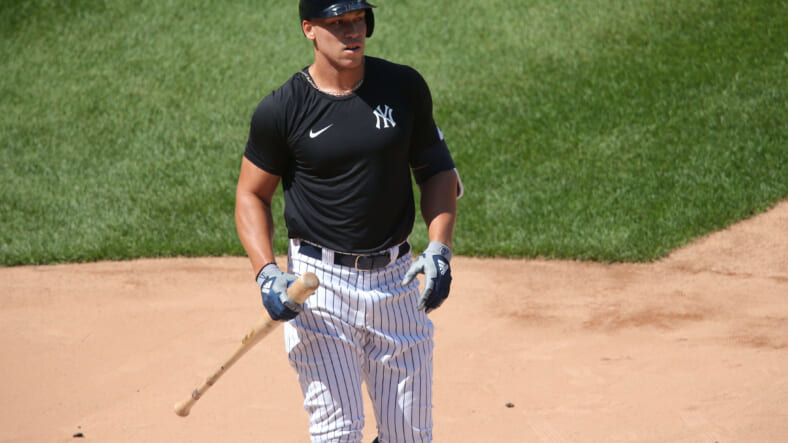 Sooner rather than later, the New York Yankees are going to have to deal with Aaron Judge and his mega-deal. Judge, who signed a one-year, $10.175 million contract for the 2021 season, is arbitration-eligible in 2022 and a free agent in 2023.

It might be in the best interest of the Yankees to wait this upcoming season to see if he can remain healthy. Judge played in just 28 games last year out of 60, hitting nine homers and 22 RBIs.

Ultimately, Judge has struggled with injuries over the past three seasons, failing to play a healthy season’s worth of games. The most heâ€™s played is 112 out of 162 in 2018, but that number has quickly decreased.

The hope is that new strength and conditioning director Erika Cressey is able to flip the script, utilizing more stamina-building workouts than muscle building and heavy lifting. That is what Matt Kraus was utilizing for the Yankee sluggers, who struggled to remain on the field for that reason.

Judge was asked about his future with the team and whether his representatives have spoken about a long-term extension. Judge didnâ€™t seem to be phased, indicating that they had bigger fish to fry this off-season.

â€œGreat question,â€ Judge said on Tuesday during a video conference call. â€œNo we havenâ€™t. Nothing on our end. Nothing from the Yankees.

Considering Aaron has a portion of Yankee Stadium carved out for him, remain the face of the franchise is probably ideal. He is a moneymaker, but they must make sure heâ€™s actually influential on the field before they offer him a monster extension. Judge understands the business aspect of things and knows that he has to put together a solid campaign before asking the big question.