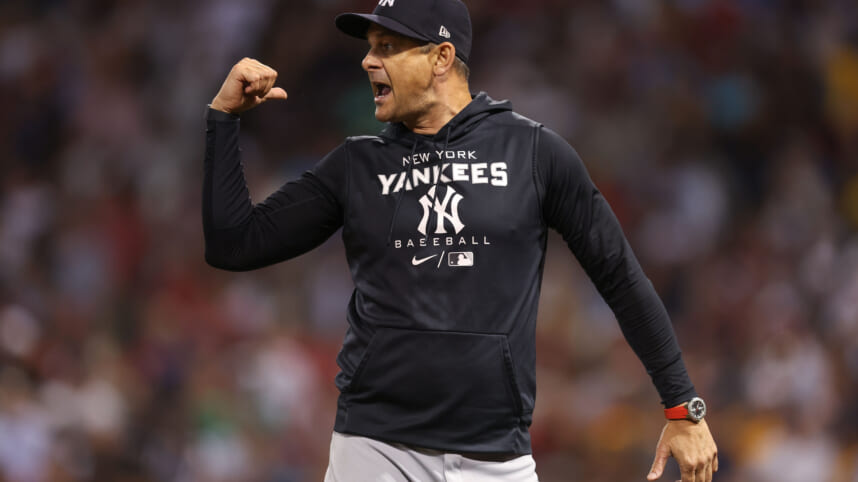 New York Yankees manager, Aaron Boone, joined The Michael Kay Show on Thursday to discuss the future of his team. This was his first appearance since yet another disappointing end to his team’s season, as the Yankees were mercifully swept in ALCS by the Houston Astros.

Boone has been the Yankees manager since 2018, and while he has made the postseason all five times as manager, he has yet to get his ballclub to the World Series, extending the Yankees’ World Series drought to 13 seasons. This year’s disappointing finish was in a season that saw Aaron Judge break the all-time single-season record for home runs in the American League, the team have 6 All-Stars and go 64-28 before the All-Star break before going 35-35 the rest of the way.

After some painfully awkward miscommunications in the clubhouse during the ALDS and some questionable decision-making during playoff games, many fans demand answers from their manager as to what went wrong during that dreadful ALCS against the Astros.

In Game 3, with the Yankees trailing the series 2-0, Boone relieved his multi-millionaire ace, Gerrit Cole, for Lou Trivino to get out of a bases-loaded jam. The move backfired horribly, as Trivino gave up three runs to put the Yankees out of reach. The Yankees would not recover from that, as they would go on to lose games 3 and 4 and be eliminated from the playoffs.

Michael Kay did not hold back on criticizing Boone for that move the night of that game.

On Thursday, Boone reflected on that decision to the guy who blasted his decision on-air, acknowledging that his decision backfired and that he should have stuck with his ace.

“That’s one [decision] where I probably should have stayed with Gerrit [Cole] and go for the strikeout and then maybe go to the pen and get the ground ball you are looking for with the sinker and slider in play from [Lou Trivino].

Boone also acknowledged the Astros’ success this season and stated that the Yankees were never able to gain the edge over Houston. The Astros finished the 2022 season with the best record in the AL, going 106-56 on the season, a seven game difference over New York.

Boone’s superstar slugger, Aaron Judge, is due to hit free agency this upcoming offseason after nearly winning the Triple Crown, falling just 4 points shy of the batting title portion. Many fans are fearful that Judge may sign elsewhere in free agency after another heartbreaking end to their season. Many also can not imagine Judge leaving the Yankees.

Boone was asked if there was anybody that could replace a player as Judge, and he expressed hope that Judge can return to New York.

“It’s hard to think anybody can replace Aaron Judge. Hopefully it doesn’t come down to that, and hopefully we get to the point where he’s back in pinstripes for his entire career – like I believe it should be. But, you never know where it’s going to end up, and if that comes, you got to be able to adapt and adjust and find other ways to get things done.”

Last offseason, the Yankees passed on marquee free agents such as Corey Seager and Carlos Correa for a stopgap option, Isaiah Kiner-Falefa. Kiner-Falefa was brought in to tighten the defense on the left side of the infield as well as provide some solid contact hitting.

Neither of those occurred at the level the Yankees were hoping for, as he produced just a .261/.314/.327 slash line while hitting only four home runs in 142 games. He also committed 15 errors, the most on the Yankees and the 13th most in MLB.

Kiner-Falefa was benched halfway through the ALDS in favor of rookies Oswaldo Cabrera and Oswald Peraza after Aaron Boone claimed Kiner-Falefa was “pressing.” Boone was asked on The Michael Kay Show why he chose to bench him after sticking to him as the starting shortstop throughout the entire regular season.

“I just felt like there were a couple of errors [in the playoffs] that he had that I felt like were weighing on him a little bit, and I didn’t want that to be something that snowballed him.”

When asked if Kiner-Falefa could be the starting shortstop next season, Boone gave a rather cloudy outlook on that situation. Top Yankees’ prospect, Anthony Volpe, could make the MLB roster next season, Peraza or Cabrera could be slotted in, or they could also sign a free agent shortstop like Trea Turner or Carlos Correa aside form going back to Kiner-Falefa.

“He can be. We got a lot of guys knocking on the door.”

The return of the Rizz?

With the possibility of lefty slugger Anthony Rizzo opting out of his 2-year, $32 million contract that he signed with the Yankees last offseason, Aaron Boone weighed in on what he thought about the 12-year veteran. Boone had nothing but high praise for Rizzo, who is very well loved in the clubhouse, and expressed his desire to be brought back should Rizzo decide to test the waters of free agency.

“He’s been everything we could have hoped for. He’s been an amazing person in our clubhouse, very productive on the field, very much cut out to play for the Yankees.”

Aaron Boone on Anthony Rizzo via The Michael Kay Show

When the Yankees traded for Rizzo in 2021, his impact was shown off immediately, as his left-handed power bat is a perfect match for Yankee Stadium’s short porch in right field. In his first full season in pinstripes in 2022, Rizzo shined, hitting 32 home runs, which ties his career-high, and having an OPS+ of 131, his highest mark since 2019 with the Chicago Cubs, where he had a 139 OPS+.

Rizzo also provided stellar defense at the corner position, giving the Yankees a very reliable defensive first baseman option. The Yankees surely would love to have him back to boost the team on both sides of the field.

The Yankees are sure to be active this offseason, with so many questions surrounding the team. Boone provided the answers to some of those questions as best as he could, but fans won’t be pleased until those words get turned into action. We will certainly know more after the World Series.