Yankee News/Rumors: Two pitching prospects could be impactful this season 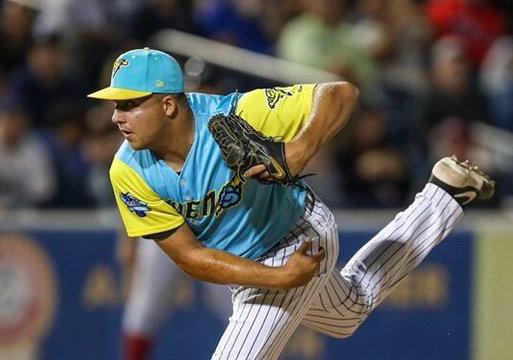 The New York Yankees got a huge pick for the starting rotation this week, signing two-time Cy Young Award winner Corey Kluber to the pitching staff. The Yankees now have a true number two starter behind ace Gerrit Cole, at least at the start of the season. With Domingo German ready to start the season and Luis Severino coming at some point in the first half of the season, the Yankees starting pitching is looking a lot better than it did just a week ago. There is also scuttlebutt that says the Yankees are also looking for even more upgrades, talking to the Cincinnati Reds about Luis Castillo.

As well as things are looking for the starting pitching, the bullpen is a different situation. The Yankees have picked up old friends Adam Warren and Nestor Cortes Jr. They will help in early relief when things don’t go well for a starting pitcher. But the Yankees still lack late relief. With the questionable relief of Adam Otttavino and the loss of Tommy Kahnle to the Los Angeles Dodgers, the Yankees need at least one more reliable arm ahead of Zack Britton and Aroldis Chapman.

Any fan who keeps track of the Yankees is at least familiar with Deivi Garcia and Clarke Schmidt’s names that made their major league debuts last season, Luis Gil, and even pitching prospect Alexander Vizcaino. Most of these are pitchers you have heard about. But under the radar are pitchers that have not made much news for one reason or another. Two of those pitchers are Greg Weissert, who is said to have the best slider in the New York Yankee’s minor league system, and Glenn Otto is known for his fastball and great strikeout rate.

These to unheralded prospects you can expect to hear a lot more about this season. Weissert was an 18th round draft pick out of Fordham University in 2016. After working mostly as a starter in college, the Yankees moved him to the bullpen. That move began a steady rise through the system, peaking with Double-A Trenton in 2019. Armed with the plus slider, he has consistently been able to miss bats while recording an 11.5 K/9 in four minor league seasons. Weissert did not pitch in 2020. His greatest need to get him to the majors is his control. Although his strikeout rate is amazing, so is his walk rate of 4.9 per nine.

Glen Otto is a year in back of Weissert, having been drafted when Weissert was completing his first year in the minors. The New York Yankees drafted Glenn Otto with their fifth-round selection in 2017. After working as a closer for Rice University. The Yankees see the 240 pound Otto as a starter and are preparing him as such. The has a strong fastball and a 12 to 6 curve that produced lots of strikeouts. A 2018 blood clot in his shoulder cost him most of the season, but he came back strong in 2019. The Yankees sent him to the fall league in Arizona, where he also pitched well, striking out more hitters than innings pitched. Like Weissert, he also has to gain more control and walk fewer batters.

Both of these prospects are on the cusp of breaking into the Major Leagues. With a Minor League season this year and some tweaking in their development, you may see them at the Stadium later in the season when some bullpen arms will need some rest. However, Otto is being primed as a start that may be a few years away.