Yankee History: A love affair, the special bond between Phil and Yogi 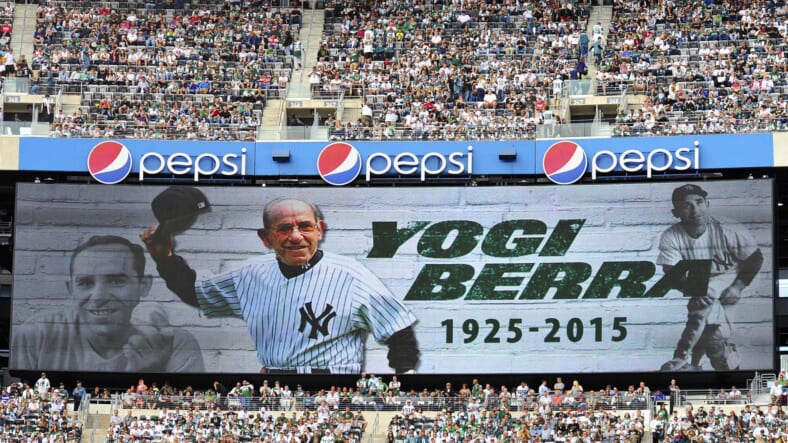 Yesterday would have been the 104th birthday for New York Yankee great Phil Rizzuto. It got me thinking about an article I wrote nearly two years ago. So I thought it would be appropriate to share it with you again today.

Over the years, the New York Yankees have had hundreds of players who developed special bonds.Â  But none more significant than the love between Phil Rizzuto and Yogi Berra.Â  No, not that kind of love, but love created by similarities, playing together, and a life shared.

Phil Rizzuto was a small man, much like Yogi Berra that may have been what connected them, to begin with.Â  Both short for baseball.Â  Phil was 5â€² 6â€³ and Yogi 5â€² 7â€³, neither were expected to be great ballplayers, but both ended up in the Baseball Hall of Fame.Â  Phil burst onto the baseball scene when he replaced Frank Crosetti in 1941 as the new New York Yankee shortstop. Rizzuto had a 13-year career with the Yankees and a .273 career batting average while a five-time All-Star, an eight-time MVP candidate winning the award in 1950.

Yogi Berra being eight years younger than Phil, made his major league debut as the Yankee backstop in 1946 and played through 1963.Â  Yogi was an amazing player for a little guy.Â  His career batting average was .285. Unlike Phil, Yogi was a home run hitter, hitting 358 in his eighteen years as a Yankee.Â  Yogi had his share of awards as well, 18 All-Stars, 15 MVPs winning it three times.Â  During the years between 1946 and 1956, the two played together and formed a very close bond.Â  Both got married, and both had children, Phil four and Yogi three.Â  During their lives, the families often spend time together off the field as well.

Phil Rizzuto and Yogi Berra are two of the most rewarded players in all of baseball.Â  They had 23 All-Star selections, 23 MVP nominations, and the two won the MVP 4 times between them. In addition, together, they collected 17 World Championship rings.

In 1956 that year, Gil McDougald, who had played third base and second base, moved to shortstop, hit .311, and stayed there, and even Phil admitted he was out of a job.Â  Now Phil and Yogi were no longer playing together.Â  Yogi would go on to manage the Yankees after he left his playing days.Â  Yogi, like Phil, was unceremoniously removed from his job when owner George Steinbrenner fired him from his managerial job, causing a rift between the two that wasnâ€™t corrected until George apologized to Yogi in 1999.Â  During all this time, the two friends remained as close as ever.Â  The Yankees in 1999 celebrated his career with Yogi Berra Day at Yanke Stadium.

The similarity between the two was more than their statures.Â  Their personalities were nearly the same.Â  They both were full of fun and characters in their own ways.Â  Yogi had an uneducated way of talking that endeared himself to fans.Â  His Yogisms were world-known.Â  Phrases like â€œitâ€™s not over until it’s over,â€Â  â€œwhen you get to a fork in the road, take it,â€ and many, many more.Â  Meanwhile, Phil had become a folksy broadcaster for Yankee games.Â  A storytelling and jokes player Rizutto broadcasted Yankee games for 40 years after he retired from baseball. Who could forget those â€œHoly Cowâ€ game calls?

In the years that followed, the only winner of a perfect game in a World Series, Don Larsen, Phil Rizzuto, and Yogi Berra became the beloved elder statesman of New York Yankee baseball.Â  They always headlined the Old Timerâ€™s Day celebration at the Stadium.Â  One thing that never changed was the bond between Phil and Yogi.Â  On August 13, 2007, Phil Rizzuto passed away.Â  In the Yankee booth, Yogi expressed his sorrow of Philâ€™s passing with tears running down his cheeks a few days later.

After Phil died, Yogi remained close to Philâ€™s wife, Cora.Â  She, too, died in 2010.Â  Yogiâ€™s wife Carmen died on March 6, 2014.Â  Yogi had lost the three most influential people in his life other than his children.Â  It may have been too much for Yogi to bear as he passed away shortly after that on September 22, 2015, at the age of 90.Â  The entire Yankee faithful shed tears upon each passing, for they felt they had lost a family member.Â  Even though you may have never met Phil or Yogi, you felt like you knew them as what you saw is what you got.Â  There was nothing phony about either of them.

Older fans are well aware of the love Phil and Yogi had for each other. However, some younger members may not.Â  To further demonstrate their devotion to each other, When Phil was in ailing health, and near the end of his life, he was living at an assisted living facility.Â  Every morning Yogi would get up and drive to the nearby home and play cards with Phil, holding his hand until the day he died.Â  This writer does not know of another bond so close in the baseball world.

Both Yogi Berra and Phil Rizzuto may have passed from this world but not from our hearts and memories.Â  Today they are both enshrined at Yankee Stadium and in the Baseball Hall of Fame. The following is a video of the YES Network’s interview with Yankee broadcaster Michael Kay shortly after Yogi Berra died.Â  He explains the special love between these two players. WARNING: This may cause you to tear up.

EmpireSportsMedia.comâ€™s Columnist William Parlee is a member of the Society for American Baseball Research.