WATCH: Yankees’ Miguel Andujar shows up to workout ripped and ready to go 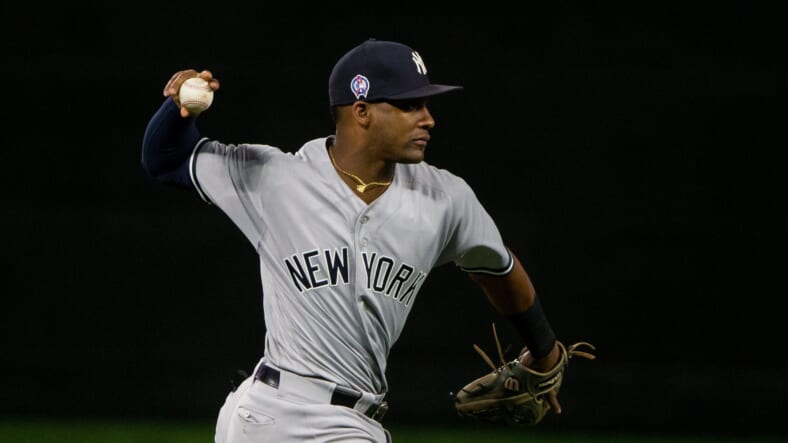 When the New York Yankees initially lost third baseman, Miguel Andujar, to a torn Labrum in 2019, the consensus was that inconsistencies and struggles would plague the position. However, the opposite happened, when Gio Urshela emerged from the ashes and put together an All-Star caliber campaign, highlighted by a .314 BA and 21 homers.

The New York Yankees will give Miguel Andujar is fair share at reclaiming his role:

Despite Urshela’s stellar season, Andujar is vying for a starting position on the Yankees, and he’s not giving up on the hot corner being his place of residence. In a workout video posted on Twitter, Andujar showed up not only sporting a non-double-clutch technique but biceps that could resemble small mountains. It looks like Saquon Barkley has a little competition in New York for the biggest arms.

â€œWe believe heâ€™s going to be totally healthy as he enters spring training and good to go.â€

Boone and Co. plan on taking a trip down to the Dominican Republic to visit Miggy, who’s entering his third season as an infielder in the Bronx. The youngster has a tough task ahead of him, but one that spurs competition and will ultimately bring out the best in both Andujar and Urshela.

If Andujar isn’t traded before spring training, which I don’t believe will happen, expect him to show up with newfound confidence regarding his defense and a live bat. He’s ready to reclaim his spot on the starting team. In his rookie year, he posted a .297 batting average with 27 homers and 47 RBIs, landing himself in the top two in Rookie of the Year voting. Replicating those numbers would put him in a great position moving forward with the organization.