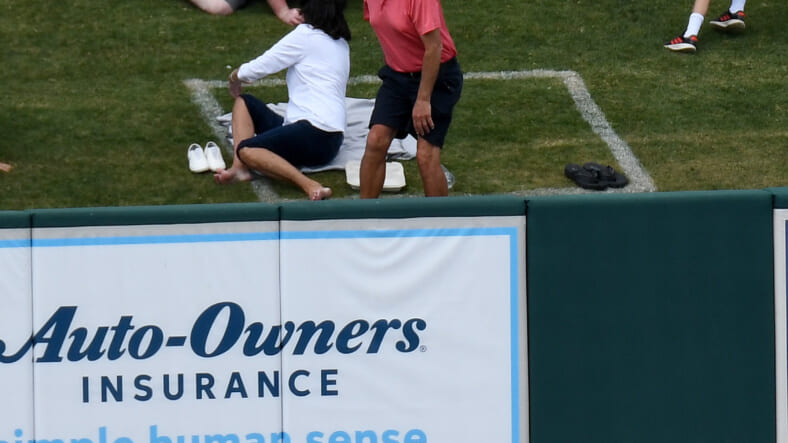 The moment New York Yankees outfielder Clint Frazier went crashing into the wall attempting to make a spectacular catch, you can only imagine the fear and nostalgia that occurred all at once. Frazier has experienced this once before in the past, running into a wall covered by a chain-link fence in Bradenton, which caused lasting concussion effects.

â€œI felt like I wasnâ€™t physically there, like something I couldnâ€™t get out of. I was scared,â€ Frazier said years ago regarding his concussion symptoms. â€œThere were times Iâ€™d be driving, like I was on auto-pilot or something. Iâ€™d look around and think, â€˜How did I get here?â€™â€Šâ€

Luckily, this time around was much different. Frazier gave himself a good scare and the rest of his teammates, but after being checked on, he remained in the game and toughed it out.

â€œHe came out fine,â€™â€™ Aaron Boone said. â€œHe was very clear-eyed and said he was fine. He said, â€˜I know what it feels like when I hit the wall [with my head] and this was nothing like that.â€™â€Šâ€

Regardless of the minor scare, Frazier is in line to take over the starting left-field job with Brett Gardner taking on a reserve role. The Yankees did retain Gardy for the 2021 season and a club option for 2022 â€” he understands that Clint will likely be the starter. The 26-year-old posted a .267 average with eight homers and 26 RBIs in 2020, and he earned himself a Gold Glove finalist accolade. He proved himself defensively and with more at-bats, Frazier is capable of being an elite offensive player. Heâ€™s not the traditional slugger the Yankees desire in the outfield, but he makes solid contact and has hidden power that flashes occasionally.