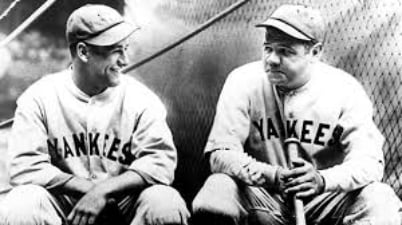 The New York Yankees have had some of the best players ever to play the game of baseball, including Yankee greats Babe Ruth and Lou Gehrig. Today, we have colorized footage of the two at batting practice as a special treat.

George Herman “Babe” Ruth, born in 1895, is the greatest baseball player to have ever to play the game. He also started one of the greatest rivalries in all of the sports. He would go on to hit 714 home runs, 2,213 RBI’s, over 2,000 bases on balls, with a slugging percentage of .690 and an OPS of 1.164, two records that still stand today. He was not only a great baseball player but still today stands as one of America’s greatest sports icons in American culture.

So goes the story of the real Babe Ruth that few know about. Ruth was born in Baltimore, Maryland. With his father working long hours in his saloon and his mother often in poor health, Little George (as he was known) spent his days unsupervised on the waterfront streets and docks, committing petty theft and vandalism. Hanging out in his father’s bar, he stole money from the till drained the last drops from old beer glasses, and developed a taste for chewing tobacco. He was only six years old.

At the age of 18, he played ball for St. Marys, a school he spent much of his childhood. In the summer of 1913, he was allowed to pitch with local amateur and semipro teams on weekends. Impressed with his play, a Baltimore scout Jack Dunn signed Ruth to his minor-league Baltimore Orioles club the following February. The Orioles, short on money, sold the young Ruth to the Boston Red Sox. Again short of money, the Red Sox sold Ruth to the New York Yankees in what has been called the worst sale in baseball history.

WhileÂ Babe RuthÂ was with the Yankees, he broke every record in baseball. As a result, he became an American Icon and a part of American culture. In his fifteen years with the Yankees alone, hit scored nearly 2,000 runs and 2,000 RBI’s. He also hit 659 home runs.

On August 16, 1948, the “Babe” passed away. Three days later, a requiem mass and funeral for the Babe was held at St. Patrick’s Cathedral. Six thousand mourners bowed their heads as Cardinal Spellman made a special prayer at the end of the solemn 1-hour service. Seventy-five thousand people waited outside the Cathedral in the pouring rain to say goodbye to the greatest baseball player of all time.

New York Yankees’Â legend and Major League Baseball Hall of FamerÂ Lou Gehrig would have been 118 years old this year, born on June 19, 1903. Gehrig played 17 years in the Major Leagues, all of them being with the New York Yankees. In those 17 years, Gehrig racked up seven All-Star games (the first one ever being in 1933, and Gehrig made the midsummer classic every year to finish his career) and was named MVP two times in 1927 and 1936, and was a six-time World Series Champion.

Gehrig is most known for his incredible consecutive games streak of 2,130. Although Cal Ripken would break that record years later, Gehrig is remembered as an MLB great who ended his career when he delivered his famous “Luckiest Man” speech on July 4, 1939.

Lou was known for many years as the Yankees’ “Iron Horse.” Gehrig was diagnosed withÂ Amyotrophic Lateral SclerosisÂ (ALS) on June 19, 1939, which is also his birthday. ALS is now known commonly as “Lou Gehrig’s Disease” since he was a national figure and won the hearts of many. Unfortunately, he passed away on June 2, 1941, two years after his famed speech.

Unlike today and social media, there is not a lot of video of these two greats playing the game. But in this rare video that has been colorized, we see these two Yankee legends take batting practice. Ruth is number three, and Gehrig is number four. Back then, Yankees numbers were assigned by where they hit in the batting lineup. Although the date of the footage is unknown, they played together from 1923 to 1934.