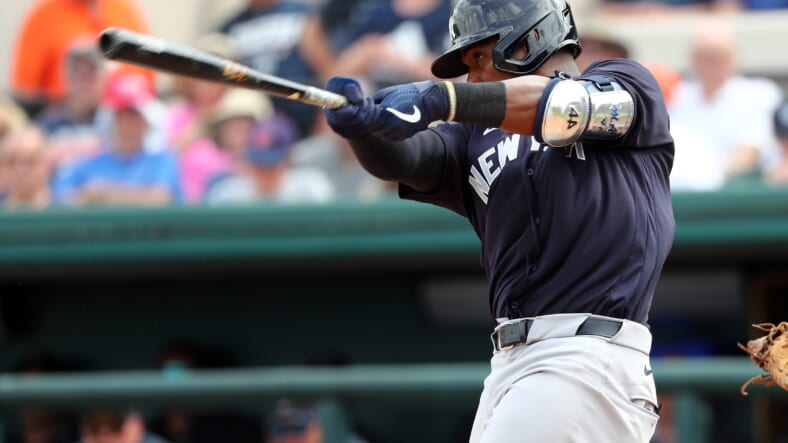 The New York Yankees could still yet make another move this off-season, despite acquiring several players to help bolster their pitching. The starting rotation added two new faces, Corey Kluber and Jameson Taillon, while the bullpen added Darren Oâ€™Day, formally of the Atlanta Braves and Baltimore Orioles.

Despite Brian Cashman supplementing losses this off-season, he took a few major risks on players that are rehabilitating from serious injuries. He even acknowledged how risky his approach was, but management encouraged him to stay beneath the $210 million luxury tax threshold, so we should expect similar moves in the coming weeks.

Nonetheless, the Yankees still have ammunition if they are looking to make another trade. Supplemental player Miguel Andujar, who is just 25 years old and controlled until 2025, makes for a quality asset. If the Yankees are looking to acquire another starting pitcher or add to their bullpen, moving Andujar could be a beneficial move.

Yankees' Miguel Andujar has hired The MAS+ Agency. Reunites with Francis Marquez, who repped the young hitter in 2017 and 2018.

The New York Yankees could still try and sell on Andujar’s potential:

Recently, Andujar switched agents, as even he might be looking to move teams and acquire more starting time. This past season, the Yankees try to transition him to the outfield, but that experiment ended poorly. He also struggled offensively, hitting .242 with just one homer and five RBIs. Since his illustrious 2018 season when he finished with a .297 average and 27 HRs, Andujar spent the last two years fighting and clawing his way back. He tore his labrum in 2019, which shut him down early and ultimately allowed the Yankees to inject Gio Urshela into his previous position, who has locked down the hot corner since.

Unless the Yankees feel confident Andujar can end up playing a role in the infield, they might be better off moving him for a pitcher. They have plenty of depth in the infield currently, and with Clint Frazier arising in the outfield, Andujar has become expendable.