The Yankees should think ‘blockbuster’ with their first base replacement 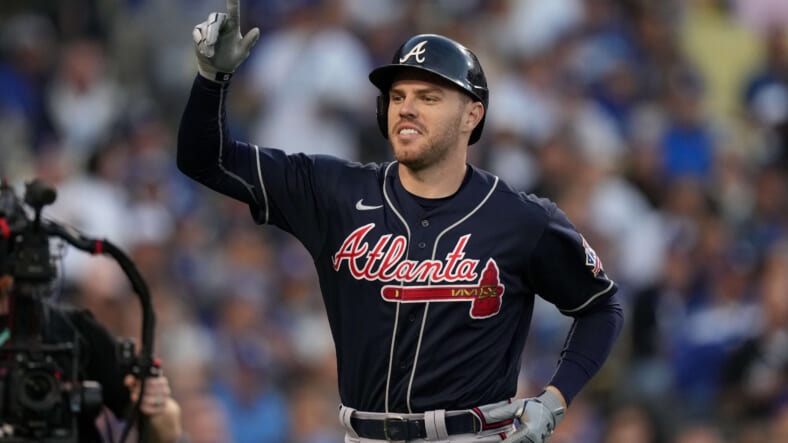 The New York Yankees had the talent to be an impeccable team during the 2021 season, but injuries and shortcomings hurt their chances at the postseason, leading them to the Wild Card as their only way in.

Ultimately, the Boston Red Sox torched the Bombers at Fenway, knocking Gerrit Cole out of the game prematurely and shutting down the Yankee hitters. General manager Brian Cashman is expected to crack the checkbook with more offensive fire-power needed once free agency 2.0 opens up.

However, there’s always the possibility that ownership gives him a sign of caution with his spending, which could force the Yankees to steer clear of shortstop Carlos Correa, who is seeking a deal worth over $300 million.

If Cashman elects to take a stopgap approach at shortstop, he could look to first base as a potential investment opportunity. Of course, everybody has heard the rumors regarding a potential trade with the Oakland Athletics regarding Matt Olson, but if management wants to keep their youngsters around in the farm system, they could take to free agency as a solution.

In December, MLB Network reporter John Hayman reported that Atlanta Braves star first baseman Freddie Freeman is looking for a six-year, $180 million deal. Atlanta doesn’t want to breach five years, but the Yankees may be willing to stretch the deal and upgrade a position with an elite player for Freeman’s services.

The Yankees would be getting a special talent:

Freeman is not only one of the best offensive players in baseball, but he’s also a solid defensive infielder, winning a Gold Glove back in 2018. He has earned an All-Star appearance in three of his last four seasons, with the lone year being the abbreviated Covid campaign.

Freeman won the MVP award in 2020 and ranked ninth in voting this past year, winning three consecutive Silver Slugger awards. There is no question he is a stud offensive player, hitting .300 in 2021 with 31 homers and 83 RBIs. He was a primary puzzle piece in Atlanta’s run at a championship, but at 31-years-old, he’s looking for a behemoth contract that only the Yankees may be able to invest in, given their state of need.

At Yankee Stadium, the Analytics department is probably gushing about the concept of Freeman launching homers into a short right porch. His 15.4% strike-out rate would be a welcomed sign for the Yankees, who average a strike-out rate of above 20%. Not only is he a home run-hitting slugger, but he’s also patient at the plate, recording a 12.2% walk rate last year and 17.2% in 2020.

The contract he’s looking forward would pay him $30 million per season, and with Aaron Judge’s big deal on the Horizon, the Yankees may be hesitant to push past the luxury tax threshold. However, ownership could give Cashman the green light to pursue him aggressively depending on the new CBA and where the threshold lies.

Alternatively, the Yankees have a number of needs they must fill, including SS, starting pitching, and an outfield slot, meaning they may have to spread around the cash instead of investing heavily in one spot.