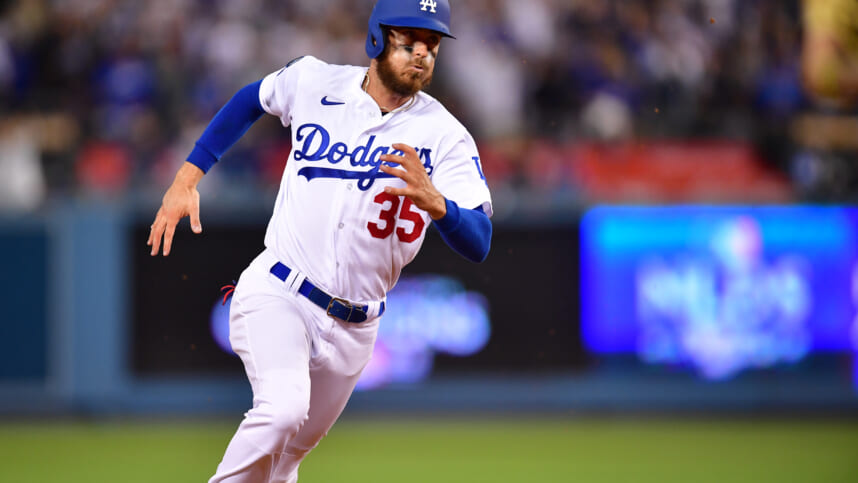 The Yankees may want to take a one-year flier on Cody Bellinger:

Cody Bellinger was recently non-tendered by the Dodgers, meaning that he is a Free Agent and can test the market. If one had told me that Belli would be cut from the squad a few years ago, I would’ve laughed and said, “as if.” Now, Cody has the chance to right the ship and prove that he is capable and deserving of a large contract.

Bellinger, back in 2019, during his MVP season, absolutely lit up the league. He clobbered 47 HR, posted a 161 wRC+, and earned an astounding 7.7 fWAR. He was the talk of the town, and the battle between him and Yelich for best player in the NL was a true two-horse race. Fast forward to today, and both guys are shells of their former selves, with the latter now settling in as a mid-tier contributor for the Brewers. Belli could benefit greatly from a change of scenery, but where did it all go wrong?

Bellinger’s game has changed… and not for the better:

The shortened 2020 season wasn’t a bad season for Cody, if anything, it was more in line with what his skillset could project out to. Bellinger never profiled as an elite hitter, and his power was truly solely because of the amount of aggression & torque he put into every swing. Take his rookie campaign in ’17, where he burst onto the scene when he sent 39 baseballs to the moon. His Hard Hit % that year was 45.7%, and in ’19, it was a staggering 45.9%.

It was a true spectacle to watch someone hit, essentially, half of every ball put in play hard. Many players can barely crack 30%, but Belli was absolutely on one. Now, in 2022, his HH% was down to 38.1%, and last year it had plummeted to 34.4%. Not to mention he has almost entirely given up on trying to be a guy who walks a lot, as his BB% and K/BB% have both really fallen off in recent years.

Belli’s patience at the plate, or should I say lack thereof, is one of the more interesting parts of his game that has vanished. Take 2017-2019, where he walked roughly 12.5% of the time and struck out at a near-20% clip. He was putting together quality ABs, working counts, and taking his walks when they were there. 2019, specifically, he walked 14.4% of the time and only struck out 16.4% of the time.

Bellinger was on-pace for a remarkably dominant career path, and then the shortened season hit. However, interestingly enough, even though his 2020 season was a huge step down from ’19, he still did the right things right. Despite taking a step back, he still walked 12% of the time and only struck out 17%. Bellinger, despite his average and “swing for the fences” mentality, was a very polished player. He was a three-outcome guy but didn’t strike out at that 30%+ clip like so many others do.

He OPS’d .789 in 2020, which is nothing to slouch over, but it was a far cry away from his monstrous 1.035 OPS he posted the season prior. 2021 was a complete wash of a season for Cody, every little thing he clung to that he did well, he didn’t do well. He abandoned his patience at the plate, swung at far worse pitches, and couldn’t barrel up a meatball to save his life.

Watching him swing the bat in ’21 was very reminiscent of how Josh Donaldson performed this year, and like JD, Cody was able to salvage what little value he had left with his elite defense. Sadly, that wasn’t even enough to keep him out of the red. Bellinger was atrociously bad as if Chris Carter and Ramiro Pena had formed a superbeing levels of bad. He accumulated a -1.0 fWAR in 2021, to go with his 47 wRC+ — all over 350 PAs, so it’s not like he just wasn’t playing and got stuck in a rut. He was the worst player in baseball, arguably, and it’s shocking to see just how far he had fallen. His -1.0 fWAR, to reference just how awful it was, Joey Gallo posted a 0.6 fWAR this season.

Coming into 2022, this was it for Bellinger, and he knew that. After struggling mightily in Spring Training, fans held out hope that he was going to put that in the rearview mirror and mash his foot into the gas. He improved dramatically from last year’s “season line,” but it wasn’t enough to warrant the Dodgers giving him a contract, or another opportunity for that matter. His 1.7 fWAR was certainly a massive improvement, but once more, his K% and BB% both went in the wrong direction.

The player that was once a 4 fWAR shoo-in, who would work at least a 0.50 K/BB ratio, is now barely pushing 2 fWAR and is settling in around 0.30 K/BB. His game has changed, and not for the better, but it isn’t the end of the line for Bellinger. With his defense, he will garner attention from the market, and many places will want to give him a flier to prove it. The Yankees could be one of those teams.

What I would give Bellinger

I can see Bellinger signing a 1-year deal worth, say, $7M to $14M on this market. The Dodgers aren’t going to bring him back, and Belli has a big-city personality, so New York could make sense for the lefty-slugger. I have recently argued that Gallo could be a huge buy-low candidate for the right price, and Bellinger is in the exact same boat. The only difference is that Cody has proven he can play in the spotlight (even with his downs, his ups speak for themselves).

Additionally, one piece that has remained consistent throughout his career is that he is a big flyball hitter. His FB% has been at least 40% every year of his career, and his GB% also sits around 35% for his career. Cody puts the ball in the air when he puts it in play, and last year he only put three HR into the seats that were not to RF. He’s a pull-happy hitter, and the short porch could be his best friend if he were to suit up in Pinstripes.

Bellinger may not be anyone’s first choice, but he is not a bad choice to try and fix-up. A .542 OPS last year, and .654 this year, may be a bit of a red flag, but the seasons prior were all electric baseball. If the Yankees were to take a flier, I’d be very content if he’s the team’s 4th OF and if they pay him $9M to do so.

Bellinger will get an opportunity, that’s for certain, it’ll just be interesting to see who gives it to him. Maybe the Brewers feel like he’d fit nicely with his former MVP counterpart, Yeli, or maybe the Orioles want him to be their guy that they build around. Cody Bellinger was an MVP, NL ROY, Silver Slugger, and is a multi-time All-Star. To sit back and say, “oh, he’s done,” would be blasphemy. Belli could be a huge bounce-back candidate, and who wouldn’t want to see him pimp jaw-dropping homers in the Bronx.