Should the Yankees Be in ‘Panic Mode’ as Wild Card Becomes a Race of the AL East? 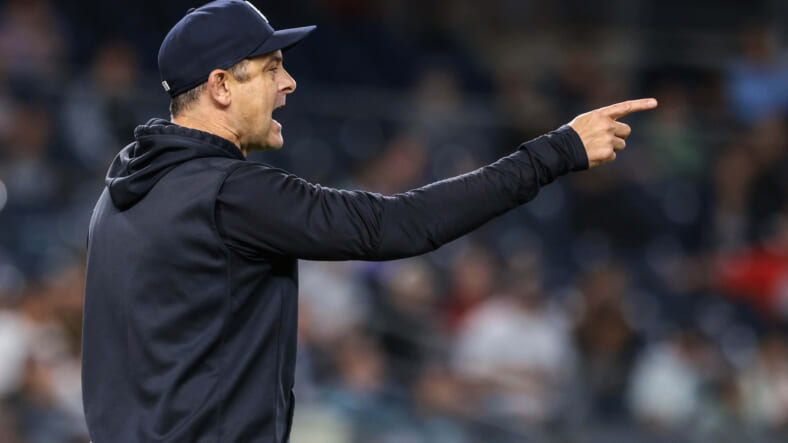 What a rollercoaster ride 2021 has been for the New York Yankees. One moment, the Yankees are tearing up the league by a storm with a 13-game win streak, the next, they lose 11 of 13 games that includes a dismal stretch of seven straight losses.

But this is nothing new for the Yankees. Earlier in the season, the Yankees produced a stellar 19 wins in 25 games played from April 27th to May 23rd. However, from May 25th to June 13th, the Yankees dropped 13 of their next 18 games, illustrating just how volatile they have been all season.

Fast forward to September 21st, and the Yankees have just a little under two weeks to go to solidify a Wild Card spot. That said, the ultimate question that remains is which Yankees team will show up for the remainder of the season?

Following the Yankees’ recent slide, the margin for error has become very small in the American League playoff race. And with a fluctuating starting rotation, an inconsistent bullpen, and a group of professional hitters who have fallen below expectations all too often this season, is it time to panic just yet?

Though the odds are certainly not in their favor, the answer to that question is no, or at least, not quite yet, and there are three key reasons why.

1. Momentum: A valuable component the Yankees have been able to gravitate from over the course of the season is their own momentum they generate offensively. Though it might be strange to think of it that way, considering they are 22nd in the league in batting average (.237) and hits (1,178), that all changes when they log together a stretch of wins and build up the locked-in energy they need to succeed.

Over the month of August alone (which included their 13-game win streak), the Yankees were sixth in hits (243), eighth in home runs (41), first in walks (111), tenth in average (.252), and fourth in OBP (.336). When this Yankees offense is on, they impose their authority with power and discipline, and in the process, become very difficult to slow down.

Even after coming off a brutal stretch of losses during the month of September, the Yankees have found a way once again to recreate the drive they need to get back on track. Placing sixth in hits (61), sixth in walks (25), 10th in average (.260), and first in home runs (16) over the last seven days, the Yankees are brewing up something special and expect them to channel this momentum as they make one last final push to clinch a Wild Card spot.

2. Health: Outside of a few key players that are still stuck on the 60-day injury list, the Yankees starting lineup, reserves, and pitching has been getting healthier and healthier by the day.

Despite losing Joey Gallo briefly due to neck tightness, Luis Severino was activated from the injury list last night, Domingo German could return as soon as this week, Jameson Taillon is set to begin his minor league rehab assignment tomorrow, and Jonathan Loaisiga could begin mound work as soon as this weekend.

This is a very reassuring sign for a Yankees team that could use every bit of talent they have to maximize this huge opportunity and put themselves into the position to secure a playoff berth.

With a handful of their key starters coming off the injury list within a matter of days, the Yankees return to full strength couldn’t have come at a better time.

3. Starting Rotation: Say what you want about this Yankees starting rotation, but this group of pitchers has provided a stabilizing presence from start to finish. Ranking eighth in the league in ERA (3.84), eighth in WHIP (1.20), fifth in opponents’ batting average (.231), and fourth in strikeouts (850), the Yankees core group of starters have shown just how reliable and consistent they can be.

Led by AL Cy Young candidate Gerrit Cole, who’s been flat out phenomenal this season, the supporting cast surrounding him has not only been quite successful themselves but has grown much stronger as well. Despite a bit of a shaky start in September, Jordan Montgomery kept his ERA below 3.00 over July and August, and Taillon has delivered a much better second-half performance since the All-Star break.

Corey Kluber certainly hasn’t been as present. But when healthy, has proven he can get the job done, putting his efficiency on full display in the 8-0 victory the Yankees had against Cleveland last week. Additionally, in the absence of German, who’s also dealt with his fair share of injuries, the Yankees have found a very special secret weapon in Nestor Cortes Jr., who’s currently posting a strong 2.79 ERA with 94 strikeouts in 84 innings pitched.

With Taillon aiming to make his return soon, the Yankees starters will look to take full advantage of its talented five-man rotation and spearhead this team to playoff success.