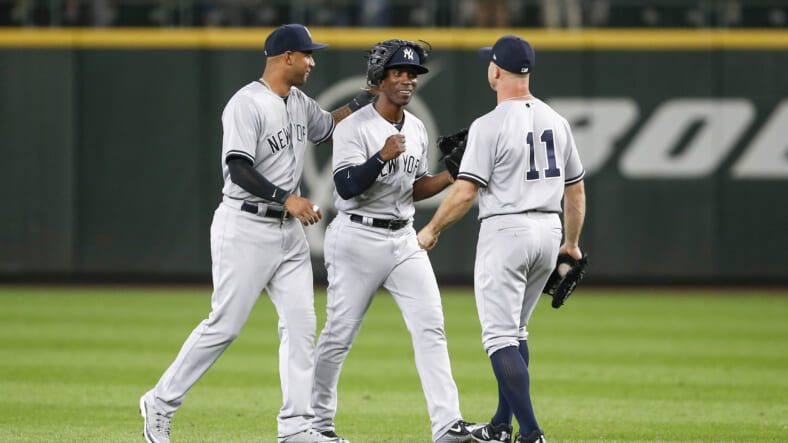 The New York Yankees have learned several things over the past few seasons. One piece of knowledge they picked up is to have quality outfield depth, especially with Giancarlo Stanton penciled in as a starter. Over the course of his career, Stanton has proven to be available, but since joining the Yankees in a monster trade with the Miami Marlins, he has dealt with soft tissue injuries that have disrupted his progression and flow.

However, Stanton was able to take his full-time outfield job back during the 2021 season for the first time in over a year. This past year, Stanton played in 26 total defensive games and 199.2 innings, recording a .980 fielding percentage. The Yankees are hoping we can be a regular starter moving forward, but they need to have a reserve plan in place just in case he falls back into his designated hitter spot.

The current projected outfield consists of great slugging hitters but injury-prone players. Judge finally enjoyed a full season of healthy play, further justifying a big contract. There is no guarantee Joey Gallo will remain with the team moving forward, as he could be included in a potential trade. General manager Brian Cashman has always been impressed by Gallo, so I would expect him to be with the team this upcoming year.

The reserves are problematic, considering Aaron Hicks played in just 32 games this past year and 59 games in 2019. He hit .194 with four homers and 14 RBIs during his short stint with the squad.

The Yankees must consider alternative options in the outfield after losing Tyler Wade, Clint Frazier, and Brett Gardner this off-season. Cashman and Gardner may reconvene on another one-year contract, but the Yankees GM has also been intrigued by Japanese import Seiya Suzuki.

In addition, it is time to elevate Estevan Florial to the active roster, having been given plenty of time to progress in the minor league system. The once top Yankee prospect has witnessed a massive drop-off in value, with consistent injuries plaguing his growth. Nonetheless, the team has no choice but to rely on his services, but that won’t scare them away from signing a free agent to help bolster the unit.