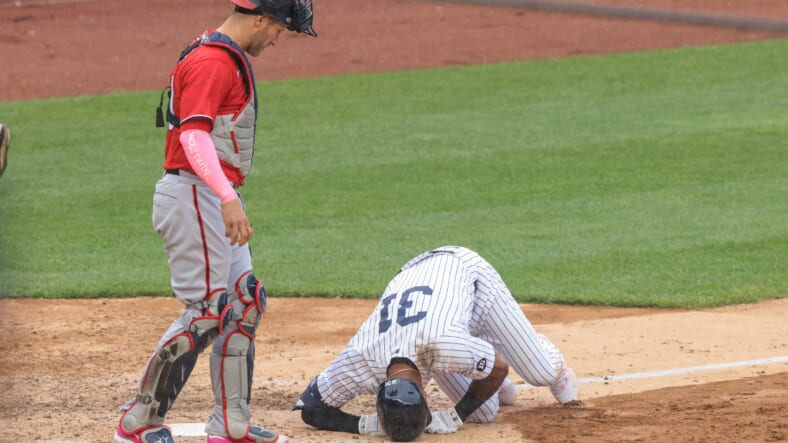 New York Yankees general manager Brian Cashman indicated that he may target another outfielder this off-season in free agency. Allowing Clint Frazier to walk and rejecting the club option of Brett Gardner leaves a hole in the outfield, but it is not the reserve spot he needs to ponder, it is the starting center field spot housed by Aaron Hicks.

Hicks, who signed a seven-year, $70 million deal back in 2019, is going into the fourth season of his contract after being injured for two of the first three years. He’s set to earn a base salary of $10.5 million at 32-years-old, but since the deal only ends in 2025, the Yankees are on the hook for a significant amount of money moving forward.

The veteran outfielder played in just 32 games this past season after featuring in 59 back in 2019 when his contract started. Last year, he recorded a measly .194 average with four homers and 14 RBIs. His 23.8% strikeout rate was the highest since 2019 and 11.1% walk rate was the lowest since 2016.

The very moment he signed that long-term extension his play quality dipped significantly, leaving the Yankees with a major problem in center.

Attempting to work his way back from the issues, Hicks played in the Dominican Republic’s Winter League which ended this past Thursday. Over 12 games, Hicks recorded a .265 average with one homer, nine RBIs, 10 strikeouts, and a .729 OPS.

While his numbers during the Winter League are respectable, the Yankees ultimately need to consider potential replacements. One player they have been linked to is Japanese star Seiyu Suzuki, who could take over in right field, moving Aaron Judge to center. Hicks can be a glorified reserve and designated hitter in the lineup, given his switch-hitting abilities.

There are a few other options Yankees can consider in free agency, including Kevin Pillar or even Ketel Marte in a potential trade. One way or another, Cashman has to make a decision at a spot that is currently owned by a liability in Hicks, who left the Bombers gasping for air with Gardner at the end of his career and Frazier dealing with vertigo.