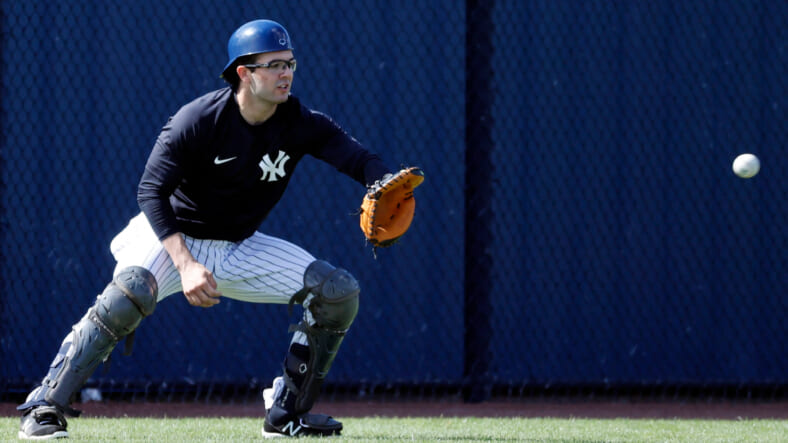 The New York Yankees have had trouble developing young players the last few years, seeing Gary Sanchez and Gleyber Torres plateau with their growth. Sanchez is on the cusp of being released after the 2022 season, signing an $8 million tender which gives him a significant pay increase despite his deficiencies.

General manager Brian Cashman waited as long as possible to make Sanchez the long-term solution at catcher, but his awful strikeout rate and inconsistent defending have made him a liability at times. Luckily, the Yankees have a stud prospect climbing the ranks, but at just 21-years-old, heâ€™s at least two years away from reaching the majors.

Former 2018 MLB June Amateur draft pick Austin Wells spent time with Hudson Valley and Tampa this past season, hitting a combine .264 with 16 homers and 76 RBIs over 382 at-bats. He also recorded 16 stolen bases, showcasing speed and athleticism. Heâ€™s a bit different than Sanchez, who is a heavier player that lacks mobility.

Wells isn’t the only prospect impressing the Yankees front office, as Elijah Dunham, a 23-year-old outfielder, has also sparked the interest of Cashman.

â€œThose two guys continue to reinforce â€” one, as expected (Wells), and the other, that heâ€™s the real deal (Dunham),â€ general managerÂ Brian Cashman said on Sunday, via NJ.com:

Dunham enjoyed 339 at-bats this past season, hitting .263 with 13 homers, 57 RBIs, and a crazy 28 stolen bases. His stats are eerily similar to Wells, but given heâ€™s an outfielder and even faster, the Yankees could look to him as a potential supplement for Clint Frazier down the road.

â€œAustin Wells and Elijah Dunham crushed it,â€ Cashman said. â€œThey did a great job. Austin Wells being a No. 1 pick, not surprising. But I think weâ€™re really proud of also what Elijahâ€™s done because he doesnâ€™t come with that blue chip pedigree. But ever since heâ€™s signed into pro ball heâ€™s been a proâ€™s pro. Heâ€™s excelled at every level and he continues to make a name for himself as he did in the Arizona Fall League.â€

Dunham also spend time in Hudson Valley and Tampa this past season. Along with Wells, they both dominated in the Arizona Fall League. Dunham finished with a .357 average, including two homers and 14 RBIs over 84 at-bats. Wells hit .344 with two homers and 18 RBIs.
Both prospects still have a while to go until theyâ€™re considered major league talent, but they are on the right path given their dominance of Low-A ball in 2021.