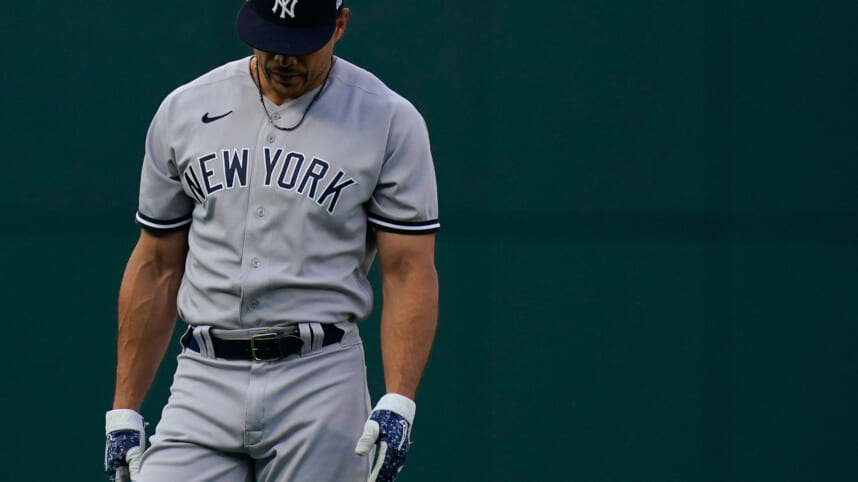 The New York Yankees will only go as far as their offense takes them come the playoffs. Great starting pitching helped tremendously against the Minnesota Twins, but lackluster run production has been their downfall since after the All-Star break.

When the pitching falters, sometimes the offense needs to step up and simply outscore opponents, which has been a consistent struggle for the Bombers. In fact, one of the team’s more polarizing players at this point in time is slugger Giancarlo Stanton.

Stanton is coming off Achilles tendinitis, which kept him out for the majority of August. He was knocked out against the Baltimore Orioles on July 23, finally making a return a month later on August 25, recording three RBIs on one hit.

However, over 23 at-bats, he posted a .130 average in the month of August with a 26% on-base rate. Things have only gotten worse since September, hosting a .063 average over 16 at-bats, including one hit against the Rays on September 3.

Stanton‘s season numbers are plummeting as a result of his poor play the past few weeks. Specifically, he hosts a .213 average with a 29.6% on base rate, some of the worst numbers in his entire career, despite making an All-Star appearance this year. He’s hit 24 homers with 64 RBIs, hosting a 51.1% hard-hit rate, but his inconsistency has unfortunately been a net negative. He still features a 112 wRC+, indicating he’s 12% better than the average player, but Stanton has barely featured on the defensive side this season. Specifically, he’s only played 312.2 innings in the outfield.

Stanton still performs well with runners in scoring position, hosting a .259 average with a 35% on-base rate and .565 slugging percentage, including eight homers at 42 RBIs. Nonetheless, since the All-Star break, he’s essentially been useless, and the Yankees can’t justify utilizing him as a pinch hitter, given his dismal numbers in that category as well.

The Yankees are absolutely screwed if Stanton can’t start hitting at his usual clip. Failing to get on base and provide home runs essentially takes his entire value out of the lineup, and with the Yankees playing Russian roulette in the clean-up spot the past few weeks, they desperately need him to return to form.