The New York Yankees Should Not Go After Nolan Arenado

Talk is resurfacing about Nolan Arenado coming to the Yankees. This is a terrible idea. 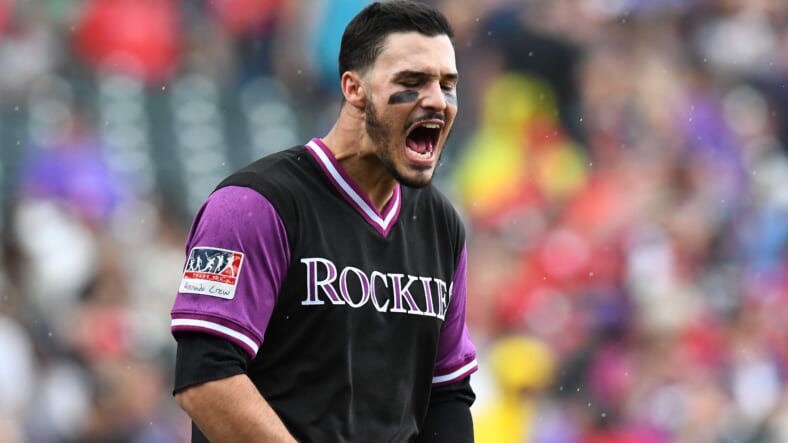 New York Yankees fans are greedy. Their team goes after the big names for the prospect of a championship. Itâ€™s something George Steinbrenner popularized back in the â€™70s/80â€™s, and it resulted in a full 15 years between World Series appearances, and closer to 20 years between championships. It just doesnâ€™t work.

But that didnâ€™t stop Yankees fans clamoring for Manny Machado and Bryce Harper last season. The fact remained, the Yankees didnâ€™t need either. Miguel Andujar doesnâ€™t do what Machado does defensively, but youâ€™re not gonna bring in someone like Machado to â€œget Andujar to improve his defense if he wants a shot.â€ You bring in someone like Machado to REPLACE Andujar in the lineup, period. And Bryce is only valuable for his power. Hits a ton of home runs, has only driven in 100 RBIâ€™s twice and has an â€œehâ€ batting average for an MVP caliber player. Judge doesnâ€™t have an MVP, and HIS career batting average is only .003 points off from Harperâ€™s career average. â€œOh, but we need a lefty to balance out the line up!â€ (Sigh) No, we didnâ€™t then, and we donâ€™t now.

And this is why we can only viably get Nolan Arenado, rumored to be a target of the Yankees for years if we trade Andujar AND Urshela to the Rockies for him.

As Iâ€™ve documented so many times, Andujar and Urshela (based on their small sample size as starting, everyday players) are the same. Both had amazing offensive numbers (Andujar has better power numbers with less than 100 strikeouts, but Urshela has a better average) with subpar defensive seasons (according to FanGraphs, Andujar was the worst defensive third basemen amongst those who qualified in 2018, Urshela was the second-worst in 2019, representing the likely improvement Andujar realistically could have made). Theyâ€™re going to duke it out this March for the starting job.Â

If you trade for Arenado, you canâ€™t keep both on the team. You have to trade them both.

â€œWait,â€ some of you are asking â€œhow is trading Urshela and Andujar not worth Arenado?â€

Countless offensive studs have passed through Denver, putting up great power numbers. Then, they leave the Rockies, and they donâ€™t come close to the same season. Arenado has spent his entire career as a Rockie. What makes you think his numbers wonâ€™t take a stark nose dive after his first season leaving Denver?

Yes, he is different than DJ. DJ spent most of his career in Denver but was a batting champion. Always a high batting average, with an average of 10(ish) home runs and 50(ish) RBIâ€™s. And we all saw what a career contact hitter in Denver could do, once he got out of Denver.

We also know that New York doesnâ€™t always mean an all-star will succeed there. Sonny Gray was an All-Star in Oakland, was terrible as a Yankee, and became an All-Star again last year pitching in Cincinnati. Robinson Cano, prior to his injuries, was having a real lackluster season in his return to New York, albeit in a different burrow. And while Todd Frazier isnâ€™t a perennial MVP candidate, his worst offensive seasons came… in New York.

Urshela and Andujar have their issues, but we KNOW they can succeed in playing 82 games in the Bronx. You trade for Arenado, those three arenâ€™t fighting to see who gets the job in Spring Training. You trade for Arenado, heâ€™s your starting third baseman, you trade Urshela for Arenado (because heâ€™s out of options), and then you send Andujar to the minors to trade him by the deadline. You got Wade, you got Estrada, and you have DJ to give Arenado his days off in the field (which come few and far between as he averages 150 games played per season).

Iâ€™m excited as anyone to see who wins third base. But, please baseball gods, donâ€™t ad Arenado to the mix.