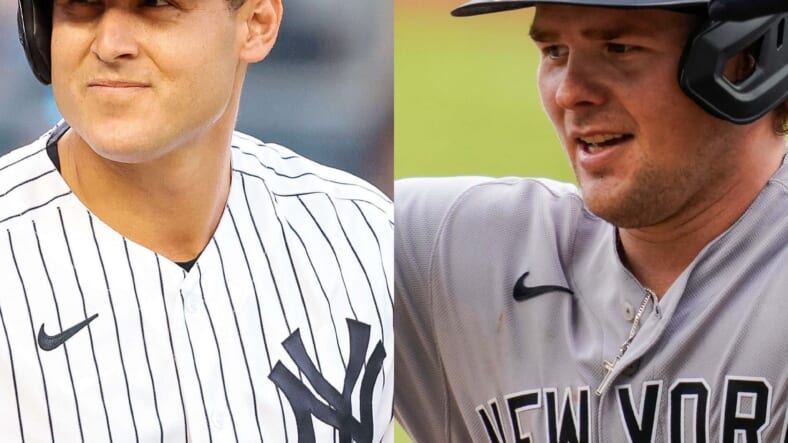 Last night, the New York Yankees completed a day-night double headers sweep of the Boston Red Sox. Their win over Boston along with the loss of the Athletics has the three teams in a virtual tie for the Wild Card.

Just over a month ago, the Yankees looked dead in the water. They were 9.5 games behind the Red Sox and every time there was a close game, the Yankees found a way to lose in heartbreaking fashion.

Then, they slowly started to turn it around. The Yankees were playing much better as we inched towards the trade deadline and then Brian Cashman went on the offensive. He acquired Anthony Rizzo from The Cubs and Joey Gallo from The Rangers.

Both men have proven that they are massive assets to the team. Rizzo was acquired because the Yankees wanted to have another lefty bat, but also because Luke Voit has spent the majority of the year injured.

Voit led the league in home runs last year and he finished ninth in the MVP voting. He’s been a popular figure with the team, but after the Rizzo acquisition, it appeared he was on his way out the door as the bombers were shopping him in trades.

They couldn’t find a good trade partner and ultimately kept Voit which proved to work out perfectly. Anthony Rizzo ended up catching COVID and has missed the last week and a half.

Immediately after Rizzo was taken out, Voit returned from the IL. Voit has played great since returning and he’s had nine RBIs in the last nine games. Rizzo is expected back today and Voit made it clear that he believes he should still be in the Yankees lineup.

Voit told the media last night, “I was top-10 in MVP last year, and I’ve been a great player for this organization for the last three years. I’m not going down, I want play. I know it’s gonna be tougher with Rizzo, but I deserve to play just as much as he does.”

I have to agree with Voit here. He absolutely deserves to play for this team and they need him in the lineup. That said, Anthony Rizzo also needs to be manning first base for the New York Yankees.

How to Play Both

So, what do they do? Look, we’re in the stretch run here and the Yankees need their best team out there. It’s time for Giancarlo Stanton to play the field every day. Luke Voit needs to be in the lineup so you make him your primary DH while giving first back to Rizzo.

Judge and Gallo can split time in Center with Judge getting the majority of time there. To save Stanton from potential injury, you can take him out late in games and put Gardner or Davis back in the game. It’s crunch time right now, and the Yankees need to put their best foot forward.

To me, it starts tonight. Andrew Heaney is on the mound so the Yankees are likely going to need close to ten runs to have a chance at winning the game. It’s the perfect time to breakout the following lineup:

Just imagine that lineup when Gio Urshela and Gleyber Torres are back. Granted, you still should find a spot to get Odor in there when you can. Simply put, the Yankees need their best lineup at all times moving forward. Sound off in the comments below on what you think the lineup should be.