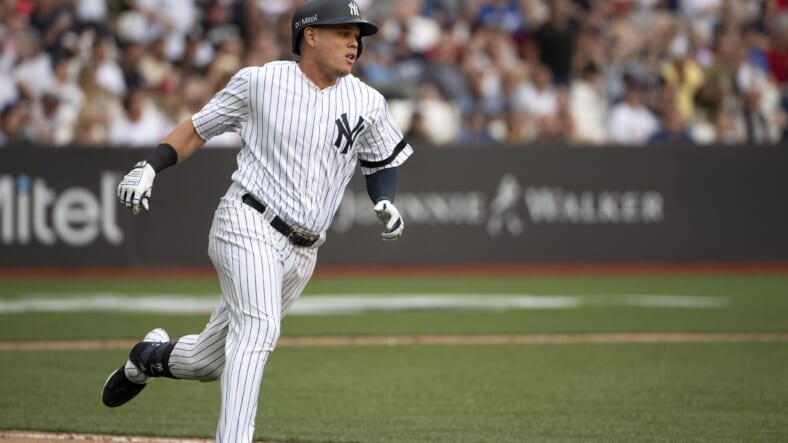 As April nears an end, the New York Knicks continue their downward spiral. Coming off yet another ugly loss while sitting at the bottom of their conference, the Knicks somehow found the win column on Tuesday to put an end to their five-game losing streak.

Oh wait, the Knicks are currently on a seven-game winning streak and sitting fifth in the Eastern Conference. It’s actually the New York YankeesÂ off a five-game losing streak and on the floor of the American League. Certainly not a jab towards the Knicks who have done an incredible job on their rebuild, but it’s certainly unusual to see them flourishing while the Yankees struggle to win games.

However, the Yankees finally managed to pull out a victory on Tuesday against the Atlanta Braves, putting an end to their dismal losing streak spanning a week. Giveth, the Braves played without the hottest hitter in all of baseball, Ronald Acuna Jr., as he’s day-to-day with an abdominal strain. But, just seeing a win is something to celebrate, regardless of who the Yankees are playing.

Sure, it wasn’t pretty, but a win is a win in the end. The Yankees only had five hits, but two of them came off the bat of Gio Urshela with the latter flying 437 feet into Monument Park for a home run. DJ LeMahieu added two hits, but Urshela’s home run was really the only run-producing swing of the night. The team had the bases loaded in the eighth and scored two runs, but they came off a wild pitch and a walk. LeMahieu and Aaron Judge each singled to set up the two run-scoring plays, but each of the scoring plays wasn’t direct results of swings.

So basically, the Yankees won the game off the Braves pitching mishaps. The Yankees did get a strong five-inning start out of Jameson Taillon and four shutout innings from the bullpen, but the bats weren’t there to back the pitching staff. When the Braves scored their lone run of the evening in the second inning, it felt like the Yankees were going to lose that game 1-0. Fortunately, Urshela came through with a bomb and the team had enough plate discipline late.

Right now, LeMahieu and Urshela are really the only two guys swinging the bat well on the team. The common factor between the two: Both are probably the most versatile hitters on the team. By that, they can hit the long ball, but can also go the other way for a base hit. They can put one in the gap when needed, or beat out a chopper for a hit. And on Tuesday night, that’s exactly what happened. Urshela’s first hit of the evening was a two-strike pitch slapped down the right-field line for extra bases, and LeMahieu picked up an infield single on a ball hit about six feet.

However, the other seven guys in the order look lost at-bat. Judge has been hit-and-miss this season, but he did manage to single on Tuesday. Giancarlo Stanton’s hitting .170, Gleyber Torres is hitting .182, and Clint Frazier’s hitting .162. All three of those guys have enormous expectations set for them this season and have so far been let-downs.

Through almost three weeks, the Yankees are hitting just .210 as a team with an OPS of .642. Players are striking out in 25% of at-bats with a combined 87 wRC+. The team has also been the worst at hitting fastballs across the league, a category that the Yankees are typically towards the top of. In short, the New York offense has performed terribly through 16 games and needs to improve. No other way to put it.

However, we have seen a few positives of late. Baserunning seems to have….improved, and the infield defense hasn’t done anything horrific over the past few games. Torres has looked a little more comfortable at shortstop and has made all of his throws, while of course LeMahieu and Urshela continue to play Gold Glove-caliber defense.

As cliche as a sounds, the Yankees should hopefully snap out of this rut soon. We’re finally seeing a few positives on each side of the ball, and a win should give the team some confidence with a long road trip looming. However, the team still has a long way to go, and the battle continues with trying to win back-to-back games against the Braves to conclude the homestand.