Should the New York Yankees attempt to trade Miguel Andujar? 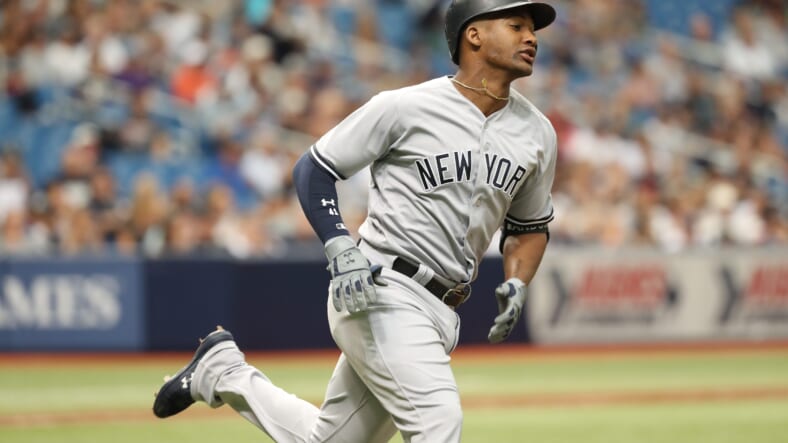 I feel like this has been a topic of conversation in the circles of New York Yankees fans over the past couple of years. What will the bombers do with Miguel Andujar? After missing pretty much all of 2019, Andujar found himself without a spot with the Yankees.

The 2018 ROY runner up lost the third base job to Gio Urshela who came out of no where to solidify himself as the starting third baseman. Urshela proving that last year wasn’t a fluke proves he will be the Yankees third baseman for the foreseeable future.

Before the year started, the Yankees had Miguel Andujar start learning the outfield. There’s no questioning his hitting so there Yankees were trying everything they could to get Andujar into the lineup. The transition wasn’t exactly smooth, but it was his first year so it could get better.

People, including myself, believed he could become the Yankees left fielder if he played the position well. However, Clint Frazier has shown this year that he will likely be getting Brett Gardner’s spot ongoing. Boone just said left field is Frazier’s spot even when Judge returns this year.

So where does that leave Miguel Andujar? He’s such a talented hitter, but he’s behind the eight ball at every position that he can play with the Yankees. What should the bombers do moving forward?

One option that the Yankees have is just to keep Andujar. The bombers have failed to prove that they can stay healthy for significant portions of time. Aaron Judge, Giancarlo Stanton, and Gio Urshela have all spent time on the IL this year.

If the Yankees were to keep Andujar, they would always have someone extremely capable ready to step in. However, would that best serve either party? Andujar wouldn’t be getting regular at bats, and he would simply be injury insurance.

Andujar has shown this year that he’s capable of returning to his 2018 form. After early struggles this year, Andujar was hitting .355/.394/.581 in September. Proving once again that he is a serious weapon with the bat in his hands. Proving his worth there, should the Yankees try to trade him?

I love Miguel Andujar, but what benefit does he give the Yankees without getting regular at bats? He’s not going to take a starting spot away from any of the parties in front of him. He’s reestablished his trade value a bit this year proving that he can still be a dangerous hitter.

I’m not saying that the Yankees should give him up for peanuts, but if they can reinforce their pitching staff or bullpen, I think it’s something you look at. I guarantee there will be calls regarding Andujar this offseason. Will Brian Cashman be offered something that will make dealing him worth it? We will see.