With rumors swirling about a potential trade of Kris Bryant, should the Yankees throw their name into the conversation? 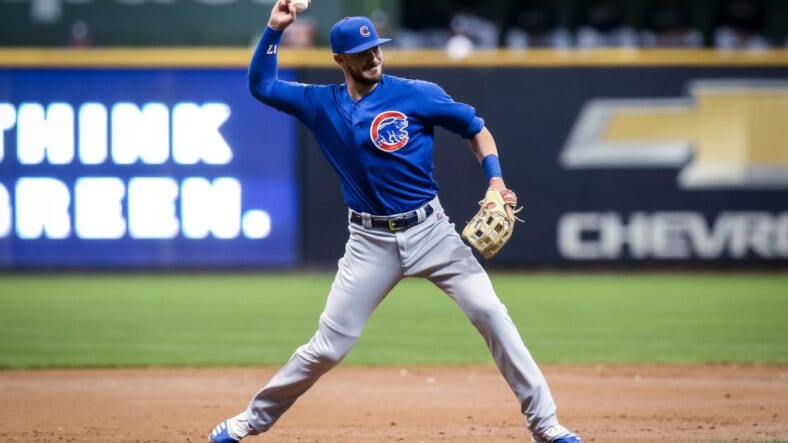 MILWAUKEE, WISCONSIN - SEPTEMBER 05: Kris Bryant #17 of the Chicago Cubs throws to first base in the second inning against the Milwaukee Brewers at Miller Park on September 05, 2019 in Milwaukee, Wisconsin. (Photo by Dylan Buell/Getty Images)

The off-season is finally coming to an end, and with baseball back there’s a lot to look forward to in 2020. With the emergence of young teams after a wild offseason, there’s certainly a lot of competition in the league. One of those teams that are presumed to be competing are the Chicago Cubs, who have been in some trade talks. After winning a case against their former MVP winning Kris Bryant that allows them to retain an extra year of control, it seems as if their relationship has been severely damaged. This has led to the Cubs talking to other teams about a deal involving their star third baseman. One of those teams involved? The New York Yankees, but would it make sense for them to land the star 3B?

The New York Yankees are in a peculiar spot at 3B. They have youngster Miguel Andujar and breakout star Giovanni Urshela as their main 3B options. Urshela is 28 and Andujar is going to be 25 in March. These two both have good cases as to why they should start at 3B, but both. raise huge question marks. Urshela has only had one good season and Andujar’s expected stats show he may not be as good as he’s shown alongside his brutal defense. With 3B not being a weak point but not being a strong point either, should the Yankees bring in the star slugger?

Why They Should Trade For Kris Bryant

Kris Bryant is a talent that is rarely seen in the MLB, a 28 year old who’s a 3-time All-Star, Rookie of the Year winner, and MVP winner. His career totals of a .901 OPS, 139 wRC+, .383 wOBA, and 27.8 fWAR in 5 seasons are really good. He’s a certified superstar, and a top 10 3B in baseball. His defense is mediocre, with -1 DRS at 3B, but it’s better than Urshela’s career -4 DRS at 3B. He also runs a 28.2 ft/sec speed, which is good for the 78th percentile. Andujar is close in speed but still slightly slower and Urshela isn’t particularly fast. The New York Yankees would be upgrading a ton at 3B, and would have an answer at 3B who’s the total package.

Why They Shouldn’t Trade For Kris Bryant

The price for such a talent isn’t cheap, and not even just in the monetary aspect. The Chicago Cubs are going to ask for a fortune for the 3B, as they won’t trade a superstar for scraps. They’re looking for players who are either impact-now or soon to be MLB ready prospects. This isn’t a matter of sending a few prospects in A ball, this is going to be trading your prized prospects. Then there’s Bryant’s free agency, which is coming in 2 years. He’s going to ask for a contract most likely of the same value if not greater than Anthony Rendon. He isn’t going to be cheap to resign, and the Yankees would be adding another $30+ million dollar deal to their payroll, with their core pieces having their free agency impending too. This deal could cripple the New York Yankees financially, and is something that is definitely going to be heavily considered.

Trying To Make a Deal?

The deal for Kris Bryant wouldn’t be a small one, you’d have to send over some premium prospects in order to land Bryant. If the New York Yankees were to do it, the deal would look a lot like this:

This type of deal would send shockwaves across the MLB and would deplete the Yankees farm system quite a bit.

Would you make this deal if you were either team or is this a highway robbery?