Report: Yankees have checked in on star shortstop, could move Gleyber Torres back to 2B 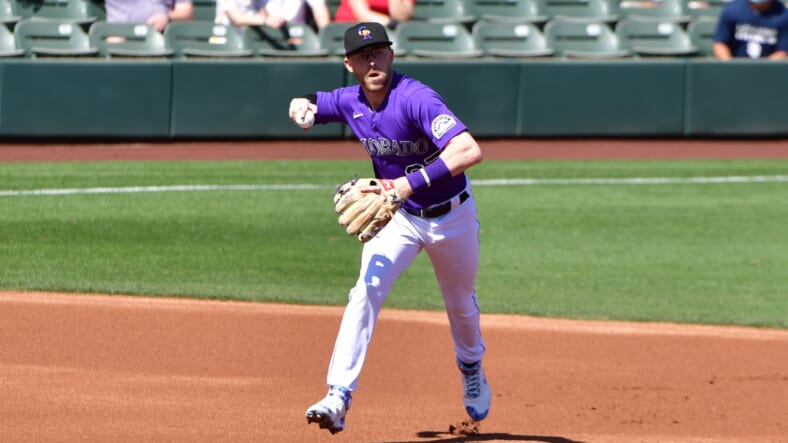 As the New York Yankees consider making a move at the trade deadline, one name that has bubbled to the surface is Colorado Rockies shortstop Trevor Story. The 28-year-old right-handed batter stands at 6’2″ and 213 pounds, and currently has two years left on his contract, totaling $27.5 million. Averaging $13.8 million per season, the star defender is struggling this season in the batter’s box (by his own standards), hitting .243 with 11 homers and 43 RBIs. However, during the 2020 campaign, he hit .289 over 59 games, recording 11 homers and 28 RBIs.

There is no question he would bring a fantastic defensive element to a position that is currently a liability with Gleyber Torres featuring. While Torres has begun to hit more effectively, he has allowed 13 errors this season with a .956 fielding percentage, well below the league average of .973.

The Yankees have reportedly checked in on Story, and with big-time slugger Nelson Cruz being dealt to the Tampa Bay Rays, I wouldnâ€™t rule out a potential deal between the Yankees and Rockies.

According to Buster Olney of ESPN, the Yankees have checked in on Trevor Story as a potential trade target:

The Yankees are among the teams that have checked in on Trevor Story. Presumably, if they followed through, they’d move Gleyber Torres back to second base.

Reports have also indicated that the Bombers and general manager Brian Cashman are intrigued by Texas’ Joey Gallo, a player they have been keeping an eye on for quite some time. He offers more depth in the outfield and a big slugger to work with, but he primarily plays right field, where Aaron Judge resides. Solving the infield woes should be a priority, especially at the most important position, shortstop. Compared to Torres, Story has eight errors this season with a .976 fielding percentage, making him above average in the category.
The Yankees have a bit of time to spare as they seek reinforcements, and luckily, their depth players and minor-league affiliates have produced a spark with the starters struggling to remain healthy.