Report: Yankees have big competition for Carlos Correa after lockout 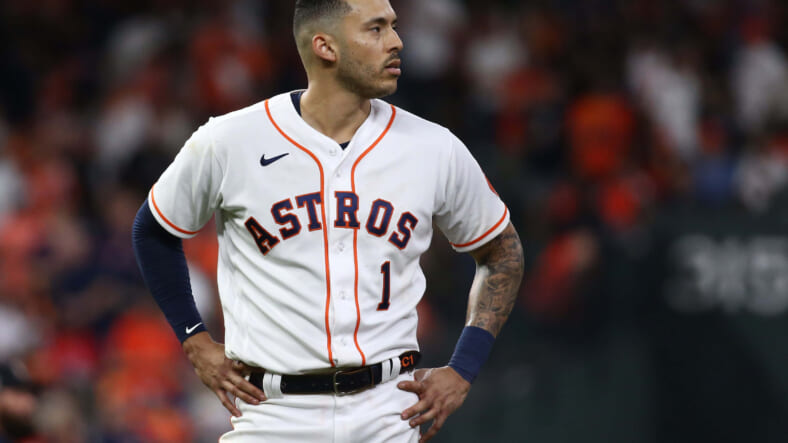 Free agency news is hard to come by at this point in time due to the lockout, but the New York Yankees are reportedly headed toward an aggressive spring when free agency 2.0 commences.

General manager Brian Cashman has plenty of decisions to make, ranging from a solution at shortstop to more pitching assistance in the starting rotation. He preferably would like to find another outfielder to provide depth, but everything is simply hearsay until it eventually happens.

If the Yankees truly want to spend big money on a new shortstop, Carlos Correa could undoubtedly be their preferred target. However, there will be plenty of competition despite teams like the Texas Rangers spending big money to acquire Marcus Semien and Corey Seager. The Chicago White Sox landed Javier Baez, but now the Chicago Cubs are reportedly interested in Correa and have the money to splash.

Bruce Levine of 670 The Score stated that the Chicago Cubs are ready to spend big money on Carlos Correa, making the Yankees’ chances even dimmer. Levine has been wrong in the past, so take this with a grain of salt, but it’s worth nothing given the lack of information at this point in the off-season due to the lockout.

“The Cubs have the money to sign Correa,” a source said. “However, the only hesitation is about the length of the deal – not the annual average value of the contract.”

If Cashman is looking for an elite postseason hitter, Correa is his man. This past season, he hit .279 with 26 homers and an 18.1% strike-out rate. By all accounts, he has progressively gotten better over the years, posting a career-high 5.8 WAR this past season.
The Cubs have the money to acquire him, but it depends on the amount of years he’s looking for. It is thought that Correa is in search of a ten-year contract, which could be too much for Chicago.
A decade long contract assumes a good health history, and Correa dealt with lower back issues that were more serious than reported during the season. That could be a major deterrent for teams, specifically the Yankees, who’ve spent big money in the past on injury-prone players. It has bitten them in the butt every single time, so avoiding that same mistake is preferable.
While Correa would be the most lucrative signing, most are starting to settle on a stopgap option like Trevor Story or Andrelton Simmons.