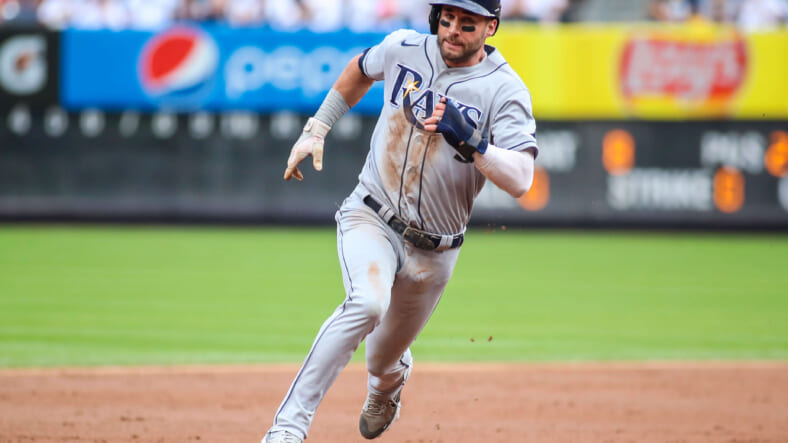 The New York Yankees have been extremely quiet the past few days in free agency, but they are expressing interest in several trade opportunities. On Tuesday, Lindsay Adler of The Athletic reported that the Bombers are intrigued by Tampa Bay Rays’ outfielder Kevin Kiermaier.

Kiermaier is on the record for saying, â€œwe donâ€™t like them, they donâ€™t like us,â€ after tensions rose last season between the two teams. The Yankees and Rays have had their fair share of intense competitions, but they may be looking to replace some outfield depth with a potential deal.

Have heard the Yankees have also expressed some interest in Kevin Kiermaier, though discussion does not seem advanced right now. Kiermaier is owed $12m next season and is obviously an exceptional center fielder. https://t.co/pUadIeWcQ0

Kiermaier is 31-years-old with a lefty bat, giving him a bit more diversity in the batting order. He signed a $53.5 million deal over six years back in 2017 but has a 2023 club option after next season. Heâ€™s preparing to earn $8.9 million this upcoming year after hitting .259 with four homers and 37 RBIs.

The dependable outfielder has been relatively healthy the past three seasons, showcasing a bit more patience at the plate over the past two years and sufficient offensive qualities. Heâ€™s not a primary slugger, more often relying on contact-hitting to get by.

However, Kiermaier is a phenomenal defensive centerfielder. This past year, he recorded a .996 fielding percentage over 894 innings in the outfield. He would offer incredible prowess in the outfield, moving quickly and efficiently, rarely making a mistake.

With Aaron Hicks proving to be a liability due to inconsistent health, Kiermaier would offer the team a dependable option they can rely on daily if need be. Having produced a 10.3 fWAR over the last five seasons, Kevin is arguably the best defensive outfielder in baseball.

Nonetheless, the Yankees would have to execute a trade for his services. A deal could include a few middling prospects, as the Rays may want to get his money off the books since his 2022 salary is guaranteed. However, it is possible they donâ€™t like the idea of trading one of their players to the Yankees, which is also a reasonable stalling point.