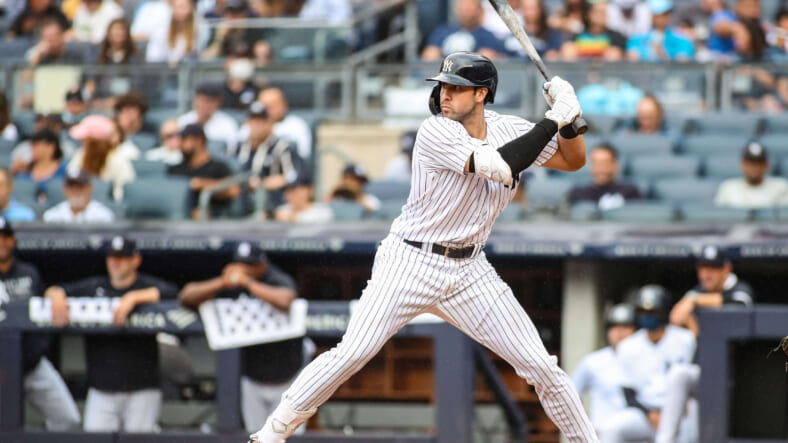 There is no doubt that New York Yankees manager Aaron Boone displayed a few interesting lineups throughout the 2021 season. Most would argue that he couldâ€™ve chosen more efficient batting orders, as the bottom half during the Wild Card was extremely inefficient.

Beyond the first five batters, the Yankees hosted Brett Gardner, Gio Urshela, Kyle Higashioka, and Andrew Velazquez. Unfortunately, they were only able to curate one hit between all of them, striking out a combined seven times.

Former manager and player Pete Rose had some harsh words for the batting order, specifically Joey Gallo, who struggled significantly in the strikeout department last season. Gallo recorded a measly .199 batting average, striking out 34.6% of his 616 plate appearances.

“That was the worst (bleeping) lineup they could have put on the field,â€ Rose said to USA Todayâ€™s Bob Nightengale. â€œTheir 6,7,8,9 hitters were all out-men. They had to have (Aaron) Judge and (Giancarlo) Stanton do something. If they didnâ€™t, all of the pressure was on Joey Gallo. You saw how that worked out.â€

Rose was undoubtedly a bit dramatic with his take, but Gallo did strike out a behemoth 213 times. He did manage to post the best walk right up his entire career at 18%, a near 5% increase compared to 2020.

â€œHow does someone who didn’t play every day strike out 213 times?â€ Rose says. â€œRay Charles wouldn’t strike out that much. I just can’t imagine striking out 213 times without killing myself.â€

Gallo is capable of being a great player, as he showed back in 2019 when he recorded a .253 average with 22 homers and 49 RBIs. He hit 38 home runs this past season, but his inability to contact hit hurt the team at times.

With Aaron Judge and Giancarlo Stanton performing at a well above average level, they need to find a contact hitter behind them who can drive them in from the base paths. Gallo hit more homers than doubles and triples combined, and had only nine more singles than long balls.

The future for the Yankees needs to be a bit different, as relying on the HR has not worked the past few seasons. They need solid contact hitting with good base runners injected into the middle of the lineup.