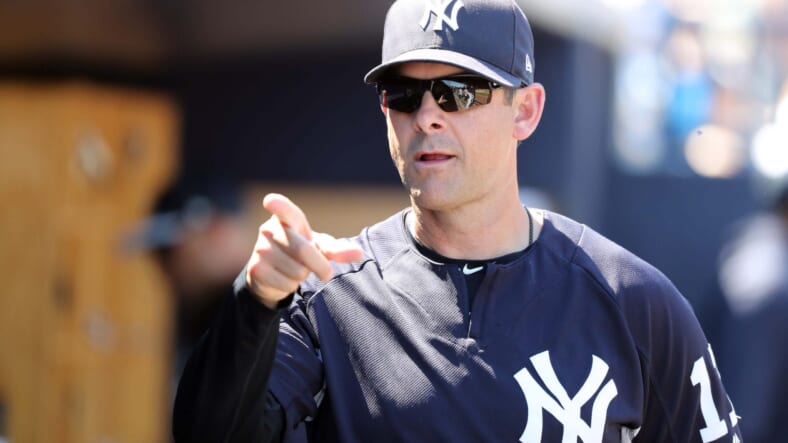 Before yesterday’s game last night, MLB announced what the expanded postseason would look like.Â  The significant change is that it will be expanded from the present ten teams to 16 teams, which will mean that more than half of the MLB teams will reach the postseason.Â  The problem the New York Yankees see with the plan is that there is near no reward for winning their division.

With the new plan to have three-game Wild Card series, if the Yankees win the division they will get to host the series.Â  In a normal season if they win the division, they and sit back and wait for the winner of the one-game wild card and may end up not having to face anyone until the ALDS. This year when they win, they will still have to reinforce that with an additional series win.

Manager Aaron Boone: â€œI really donâ€™t see it,â€™â€™ Boone said of a 16-team playoff in a normal year. â€œI see maybe something in-between last year and this year. But I donâ€™t see 16 teams in a 162[-game] scenario. I think this year, all bets are off.â€

Some of the other New York Yankee players were even less happy with the plan.Â  Yankee reliever Zack Britton had this to say about the setup:

â€œI definitely think itâ€™s good for the game to create more high-leverage games, if thatâ€™s what you want to call it, more excitement, but I wasnâ€™t a big fan of division winners not being rewarded in some form or fashion. So I wasnâ€™t really for this, but I do see the benefit of increasing playoffs and adding that to our sport.â€

â€œItâ€™s good for the future,â€™â€™ Britton said. â€œI just felt like it was kind of rushed. But the only thing I wouldâ€™ve liked to see is division winners, whether thatâ€™s us or another team, get a bye or something to show you won your division.â€

Chad Green said heâ€™s â€œnot really sure [and] a little hesitant,â€™â€™ about the changes.

Both Adam Ottavino and Chad Green are also unhappy about the man on second base in each half-inning after the ninth inning of any game this season. Ottavino said, “it’s just not real baseball.”

â€œItâ€™s gonna be different,â€™â€™ Green said. â€œA lot of guys are gonna have to adjust to it. Youâ€™ve got to have your stuff as soon as you get in there. If you start the 10th inning, the game could be over real quick.â€

â€œItâ€™s gonna be more of a mental thing than anything,â€™â€™ Green said. â€œGuys are just gonna be coming in and trying to attack guys right away and see what happens. â€¦ Iâ€™m personally not a huge fan of it. When youâ€™re playing a 60-game season and every game matters, just to throw a guy on second base is not the answer.â€

The man on second base at the bottom of the tenth inning happened for the first time in the season on Friday night in Oakland. The Athletic’s won over the Lost Angeles Angels. Oaklandâ€™s Marcus Semien started the bottom of the 10th on second and scored on Matt Olsonâ€™s grand slam.

The bottom line in this and other issues that affect baseball is that all will have to relent to the keyword “adjust.”Â  There is much that all teams will have to adjust to, from not being able to play in their home park to having key players come down with the coronavirus, and yes, to conform to all the new rules.Â  We that love baseball will get through it. For the New York Yankees, before all this started, they were favored to win the East and go on to a World Series.Â  Much may have changed, but that has not changed, they are totally focused on the Championship ring.