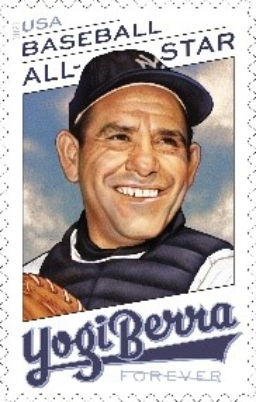 The United States Postal Service announced that New York Yankees would be featured on a postage stamp this year. Major League Baseball All-Star Yogi Berra was widely known for his colorful comments. Today, he receives a new distinction as the U.S. Postal Service announces several additional stamps to be issued in 2021. It features him, science fiction and fantasy author Ursula K. Le Guin, and artist Emilio Sanchez.

The USPS, in announcing the stamp included the short biography: Honoring Yogi Berra (1925-2015), this stamp salutes one of the best and most celebrated baseball players of his era, winning a record 10 World Series with the New York Yankees. The stamp art is an original digital portrait of Berra dressed in his Yankees cap, pinstripes, and catcher’s chest protector. Considered the best catcher in the American League in the 1950s, he was also a feared hitter, and in 1972 was inducted into the National Baseball Hall of Fame. Antonio AlcalÃ¡ was the art director and stamp designer. Charles Chaisson was the artist. Michael Doret created the â€œYogi Berraâ€ lettering.

The USPS just announced Grampa will be on a Forever stamp in 2021. So exciting!

Lawrence Peter Yogi Berra was one of the most popular New York Yankees of all time. With all the discussion on who will be the Yankee catcher next season, I thought it would be appropriate to look at one of the Yankeesâ€™ most iconic catchers. Yogi was a long time catcher, coach, and manager for the Yankees. Berra was born in 1925 to immigrant parents Pietro and Paolina Berra in the Italian neighborhood of the â€œHillâ€ in St. Louis, Missouri. His real name was Lorenzo Pietro Berra. To fans, he was just â€œYogi.â€

After Berra retired as a player after the 1963 World Series, he was immediately made Manager of the Yankees, just one of many coaching jobs he would hold until he again Managed the Yankees for George Steinbrenner. In 1984 agreed to an extension into 1985 with the assurance that George would not fire him. Well, sixteen games into the season, George fired him and didnâ€™t even do it in person. This created a huge rift, and Yogi was absent from Yankee Stadium for over fourteen years. As George aged, he realized that he wronged Yogi and arranged a meeting.Â  Yogi agreed to it at Yogiâ€™s New Jersey home, and they patched things up. On July 18, 1999, George arranged a Yogi Berra Day at Yankee Stadium honoring the former catcher. On that same day, David Cone pitched his perfect game with Don Larsen in the stands. Yogi caught Don Larsenâ€™s perfect game. From that time on, Yogi was a fixture at Yankee Stadium and became everyoneâ€™s Grandfather.Â  Yogi made his last appearance at Old Timerâ€™s Day in June of 2015.

In 1998, Yogi opened the Yogi Berra Museum and Learning Center on Montclair State University’s grounds. There was also a baseball stadium named after him. Berra had three sons with his wife, Carmen. In 2012 due to Carmenâ€™s declining health, they moved into an assisted living facility where Yogi would live until his death. In 2014, Carmen passed away. Previous to that, his closest friend Phil Rizutto died. The two people closest to him had died.

Yogi Berra will be remembered as a great catcher and baseball player. Still, he will also be fondly remembered for his Yogi-isms. a series of delightful aphorisms about baseball and life in general, quotes like, â€œNobody goes there anymore, itâ€™s too crowded,â€ â€œ90% of baseball is mental, the other 50% is physicalâ€, â€œwhen you come to a fork in the road, take it,â€ â€œIt ainâ€™t over til itâ€™s over,â€ and â€œyou can observe a lot by watching.â€ Those are just a few of the wonderful Yogi-isms that are still quoted today.Â  One day Yogi was asked about his Yogi-isms, he in his way with words: â€œI never said most of the things I said.â€

Yogi Berra is one of the most honored Yankee baseball legends.Â  He was an All-Star 18 times; no other catcher in baseball has approached that. He was an MVP candidate 15 times while winning the prestigious award three times.Â  No other catcher in baseball has ever won the MVP three times. His museum displays his 10 World Series rings, which is more than any other baseball player in history. He won three more championships as a coach, including an astonishing 21 total World Series appearances as a player, coach, or manager.Â  During his eighteen-year career, he amassedÂ  2,148 hits, 358 home runs, and 1,430 RBIâ€™s while hitting a career .285 batting average.Â  I was lucky enough to watch Yogiâ€™s career, and a great one it was.

After leaving the Yankees, he became a coach for the cross-town New York Mets.Â  He served under Casey Stengel, Wes Westum, and Gil Hodges for seven seasons, including the Metsâ€™ 1969 World Series win.Â  During spring training in 1972, Gil Hodges suddenly died, and Berra was made manager. Although he was a successful manager, Berraâ€™s tenure as the Mets manager ended with his firing on August 5, 1975. He had a record of 298 wins and 302 losses, which included the 1973 postseason. In 1976, he rejoined the New York Yankees as a coach.Â Â  During that time, the Yankees won the Fall Classic in 1977 and 1978. Berra was again named Yankee manager before the 1984 season and was quickly fired, leading to the aforementioned riff with owner George M. Steinbrenner that lasted for fourteen years.

In 1985 Berra signed with the Houston Astros as a bench coach and led the NLCS team in 1986.Â  Berra stayed with the Astros completing the 1989 season. He finished his managerial career with a regular-season record of 484â€“444 and a playoff record of 9â€“10. Yogi Berra was elected to the Baseball Hall of Fame in 1972.Â  In the same year, his Yankee number 8 was retired with a Monument Park plaque at Yankee Stadium.

Sixty-nine years after Yogi joined the Yankees, he passed away in his sleep at 90 in 2015. All of New York mourned. The empire state building was lighted in pinstripes, The Yankees wore â€œ8â€ on their sleeves, flags flew at half-mast from New York to his birthplace in St. Louis, and a moment of silence was honored at major league games throughout the country. In 2015 President Barack Obama posthumously awarded Yogi with Presidential Medal of Freedom. In Berraâ€™s place, his son Larry Berra accepted the medal.

Yogi Berra, the unlikely baseball Icon and folk hero, lived his long life, on and off the field, with uncommon humility.