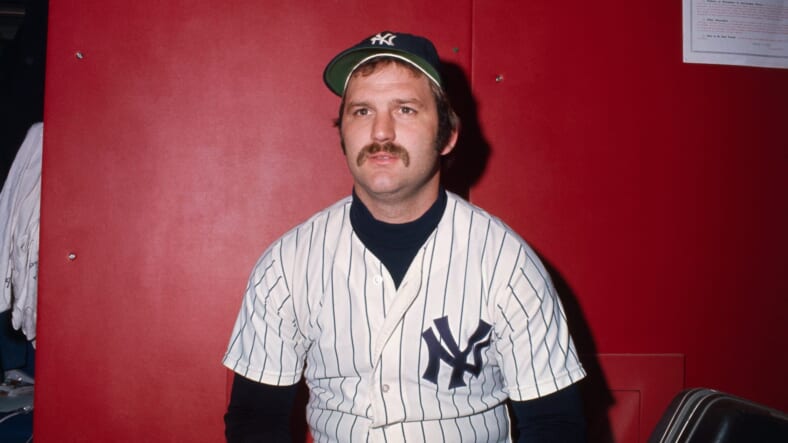 Catcher Thurman Munson was a cornerstone of the great Yankees teams in the 1970s. He was also the teamâ€™s captain. (Bettmann, via Getty Images)

On August 9, 1979, the baseball world was shocked as the Yankee faithful cried over the loss of their first Captain in 40 years, catcher Thurman Munson was killed in a plane crash!

Thurman Munson is the only baseball player in the history of the game to win the title of College All-American, MLB Rookie of the Year, receive the MVP award, Gold Glove awards, be a seven-time All-Star and win World Championships. Munson was one of the most popular players on Yankee teams for eleven years. He was the heart and soul catcher for the New York Yankees between 1969 and his untimely death in 1979.

Munson was born in Akron, Ohio, and was the youngest of four siblings. At the age of eight, his family moved to Canton. He learned to play ball with the help of his older brother Duane. He always played ball with older kids that were three or four years older than he. He was a talented athlete, and that was exhibited in high school, where he was captain of the baseball, basketball, and football team. He was all-city and all-state in all three sports. In baseball, Thurman played mostly shortstop but, in his senior year, switched to catcher. He received a baseball scholarship and attended Kent State University.

In the summer of 1967, this writer was lucky enough to see Thurman play in the Cape Cod League. I remember him because he was the star of the Chatham A’s, batting .420. Thirty-three years later, he would be named to the Cape Cod Baseball Hall of Fame. In 1968 Munson was the fourth-round pick of the Yankees in the 1968 MLB draft. He only played one year in the minors, hitting to a .301 average with six home runs and 37 runs batted in. He made his major league debut in 1969 and had two runs scored in his first game. As a catcher in 1970, he earned the American League Rookie of the Year Award.

In 1971, Munson earned his first All-Star nomination, in the same year that he would have only one error, This same year, Munson would solidify his reputation as an all guts player and a fighter. That is the same year that he was knocked unconscious at the plate for five minutes, he was taken to the hospital but was back in the dugout before the game was over. This was also the year his feud with Boston’s Carlton Fisk started. Gene the “stick” Michael had a failed bunt attempt as Munson tried to score from third, he piled into Fisk and was called out, but remained tangled with Fisk, causing a ten-minute bench-clearing brawl, in which both catchers were thrown out of the game. In the years between 72 and 74, Thurman got more All-Star nods, Gold Gloves, and a Slugger of the Year Award.

In 1975, Munson batted a career-high .318. In 1976 he was made Yankee Captain, the first Yankee Captain since Lou Gehrig retired. He scored 3 runs in the ALCS and batted .529 in the World Series that was lost to the Reds. Munson batted .308 with 100 RBI in 1977, giving him three consecutive seasons batting .300 or better with 100 or more RBI each year. He was the first catcher to accomplish the feat in three consecutive years since Yankee Hall of Famer Bill Dickey’s four straight seasons from 1936-1939. In the 1978 ALCS against the Royals Munson hit the longest home run of his career (475′). Munson’s World Series championships in 1977 and 1978 made him only the second catcher in baseball history, at the time, to win a Rookie of the Year Award, an MVP Award, a Gold Glove Award, and a World Series title during his career.

In 1979, the battling Munson was beginning to show the wear and tear of being a catcher who played so hard, He was thinking of going to the Indians (where he would be close to family) or retiring after the season. He was an accomplished pilot and owned his own Citation. He would often go home to be with family on days off. On August 9, 1979, on one of those trips home, he was killed practicing touch and go’s at his home airport in Canton. The entire shocked Yankee team, including George Steinbrenner, Manager Billy Martin, best friend Bobby Mercer, and other players would travel to Ohio to honor Munson and support his wife, Diana. The baseball commissioner advised George not to let the team go, as if they weren’t back in time for that night’s game, they would have to forfeit. George said if we forfeit, we forfeit we are going. Munson’s funeral was delayed by 30 minutes while thousands waited in the streets for the Yankees to arrive in their chartered plane.

Munson’s best friend, Bobby Mercer, gave an emotional eulogy to his friend at the funeral. It was obvious to all that upon leaving the funeral, both Murcer and Martin were visibly shaken. The Yankees did get back to the stadium in time for their game. Billy Martin didn’t want Bobby to play as he was still shaken by the day’s events. Bobby insisted on playing. Murcer practically won the game single-handedly, bringing the Yankees back from a 4â€“0 deficit with a 3-run homer in the 7th, then hitting a walk-off 2-run single down the left-field line in the bottom of the 9th, causing famed commentator Howard Cosell to exclaim what a heroic performance Murcer had put on. Murcer never used the bat from that game again. He gave it to Munson’s widow Diana.

Diana Munson takes the place of Thurman during every Old Timer’s Day celebration at Yankee Stadium. His locker at the stadium remained empty until the old Stadium was torn down.Â  When the new Yankee Stadium was built, Munson’s locker was picked up in its entirety and moved to the new stadium where it sits in the same position as it had in the old stadium. Thurman was true Yankee great.Â  Munson was on the Modern Era Committee’s list for nomination to the Baseball Hall of Fame for the first time last year.Â  Many Yankee fans believe Munson would have been in the Hall of Fame if he had not lost his life, shortening his career.

Upon the death of superstar Kobe Bryant, Diana Munson said: â€œI pray she is surrounded by love.”Â  Munson pointed out several similarities between Bryant and Munson, including being superstars, the love of their families even to having their own aircraft so they, despite their sports commitments they could still spend as much time at home as possible.Â Â  The parallels were eerie as they both died in their own aircraft.Â Â  She ended the telephone interview by saying: â€œI wish I could hug her (Venessa Bryant), and tell her everything is eventually gonna be okay, you have to take it day by day and let the memories you and the fans have sustain you.â€™â€™