New York Yankees: Will it be the Rays or the Jays? And more 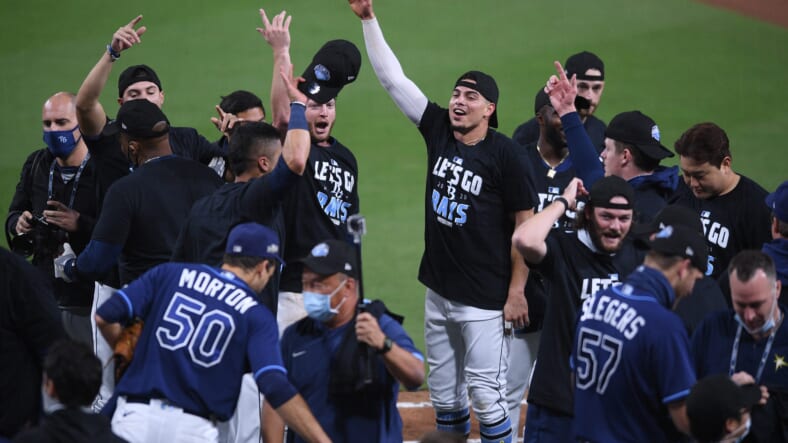 The New York York Yankees will meet up with the Tampa Bay Rays today at 3:10 pm in a contest that may determine or at least give us a clue how the Yankees will play against the Rays this season. Last season the Rays were the Yankees’ nemesis that ultimately caused them to lose the East division. But this is a different year with teams that are quite a bit different.

Not only are the teams different the division itself is different. We are mainly talking about the Yankees, the Rays, and yes, the Blue Jays. The Red Sox and Baltimore are, for the most part, out of the conversation. The Yankees, with pretty much the same lineup, are set up to have much better pitching this season. The Rays, for their part, are a team the doesn’t have the pitching it did last year. And the Jays, well, they are a substantially improved team and may be the most competition for the New York Yankees this season.

It could just be that these three teams will dominate the East and end the season just a few games apart. Whatever the case, it will be an exciting season for all three teams’ fans because this could be a season that isn’t decided until the last weeks of the season.

Last year the Tampa team ended up seven games ahead of the Yankees. In 2019 the Yankees won the East and the Divison, only to lose it to the Astros in the sixth game of the ALCS. Last season coming in second to the Rays, they swept the Wild Card from the Indians but lost the Division to the Rays, who went on to the World Series.

This season the Rays have lost two of their best pitchers. They traded away their ace Blake Snell to the Padres and didn’t offer Charlie Morton a qualifying offer; he quickly walked to the Atlanta Braves. This is not to say the Ray has no pitching; they do. Tyler Glasnow was certainly no slouch against the Yankees last season. To round out the Ray’s rotation, they have Ryan Yarborough, Michael Wacha, Chris Archer, and Rich Hill, who will start today’s game against the Yankees.

The New York Yankees have ace Gerrit Cole, 2 time Cy Young winner Corey Kluber, Domingo German, Jameson Taillon, and Jordan Montgomery. Kluber will face Hill today. The potential for the Yankees is greater than for the Ray’s pitching. The biggest difference is that the Yankees have pitching depth and a better bullpen so far early this season. The Blue Jays have a lineup near comparable to the Yankees, one that is young, hungry, and energetic.

The Rays seem to have the edge on being the most competitive with the Yankees, but that could quickly change when the Jays get up to speed. They are starting the season minus two of their starters on the IL, Robbie Ray and Nate Pearson. Hyun Jin Ryu is their ace. Rounding out the rotation are Ross Stripling and T.J. Zeuch. At present, the Jays lead the Yankees 2-1.

Gary Sanchez just doesn’t get it

The New York Yankees and Yankee’s broadcasters continue to sing Gary Sanchez‘s praises, even though what you see with your eyes doesn’t sync with what you are hearing or seeing. When Gary strikes out or grounds out, you will often hear that he looks terrific at the plate. Well, okay, but fellows, he struck out.

I will be the first person to say that he is in a much better place right now than last season. He’s hitting .278 in the regular season compared to last season’s .147. But at the same time, he just can’t keep his focus on winning. He has often been criticized for his lack of hustle. On Sunday, he was nearly called out at second when he trotted from first to second. On Wednesday, he hit a ground ball and gave up on it before getting to first base. Had he hustled, he could have beat it out because he was just out even with the jog. He seems to lack focus that keeps him operating at 100%.

It often seems like he is clueless at times. If you watch closely, you will see him hit home runs (2) but in the next at-bat flailing at balls down and out of the strike zone. I am still baffled by him saying last season that he didn’t understand why Kyle Higashioka replaced him in many games at the end of the season and in the postseason. “They never told me.” Maybe I’m in the dark, but it would seem to me any player who was mostly useless to the team would understand why he was taken out of games.

I like to stay away from political stories as much as possible. Still, it’s hard not to note when New York Yankee perfect game pitcher David Wells says that he is no longer going to watch baseball because Rob Manfred decided to move the All-Star game from Atlanta to Denver because of voting rights laws.

Anyone that follows baseball knows that the MLB has moved the All-Star game crippling the Atlanta economy, at least during the summer. Georgia has passed new laws that many believe restrict the right to vote for many. On the other hand, Colorado has some of the least restrictive voting laws in the country; they mail absentee ballots to everyone.

â€œIâ€™ve had a lot of dealings with Rob Manfred back in my playing days, and I never liked the guy,â€ Wells said during the interview. â€œTo me, how do you change the games, the dynamics, and hurt a city like Atlanta that really needs some income in that situation?â€Â  â€œI mean, Atlantaâ€™s a great place to play baseball.â€ â€œI donâ€™t watch baseball anymore, Brian,â€ he said on the radio show. â€œI refuse to watch it because of this. I donâ€™t want no part of it, and this was my life â€¦ For me not to want to go to a baseball game or even watch, it kills me, because I donâ€™t put up with that kind of crap, and I donâ€™t condone it.â€

And Wells is not just made at MLB; he’s also spouting off on Nike.

If I was playing right now, Brian, I would not wear that Nike,â€ Wells said, over the apparel company’s deal with national anthem kneeler Colin Kaepernick. â€œI would rip it off. I would cut a hole in my jersey, and not have Nike on anything, and if I got suspended, so be it.â€ â€œItâ€™s [Kneeling for the national anthem is] disrespecting our flag, itâ€™s disrespecting our military guys, and I donâ€™t stand for it,â€ Wells reportedly said.