New York Yankees: What kind of contract is James Paxton looking at during free agency? 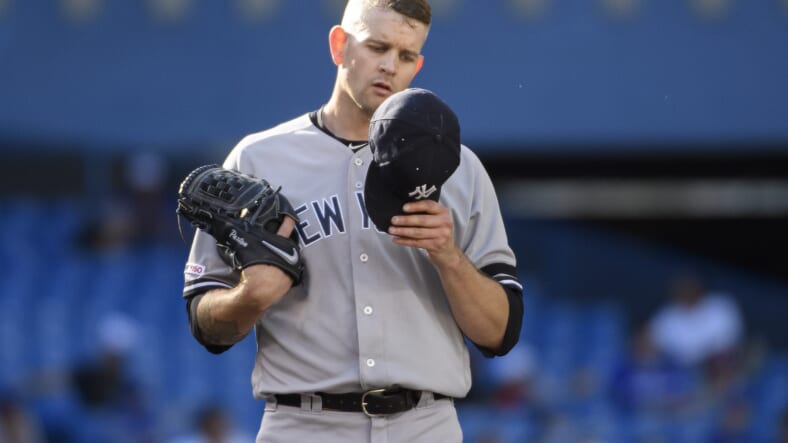 James Paxton is an extremely talented pitcher. He has a 3.58 ERA (3.31 FIP) in 753.1 career innings, with a very good 26.5 K%. When he’s on, he can be very dominant, and the New York Yankees know that. They were his team for the last two years. But now, the southpaw is set to test free agency.

Yet, there is a feeling that it may not be the best of times for him to enter the free agent market. Sure, there aren’t too many top arms out there, but teams usually like safer bets to stay healthy when they are going to splash the cash.

Between his age (32,) his extensive injury history, the fact that he showed diminished velocity in 2020, and the left flexor strain that led to his absence during the Yankees’ playoff run, chances are that he won’t score the lucrative multiyear deal he probably deserves.

Those are probably the reasons why the New York Yankees don’t seem in a hurry to bring him back for the 2021 season. According to reports, “Paxton is in line for a one-year deal in the $8-10 million range. Perhaps a team sweetens the offer with a second-year option that vests with a certain number of starts.”

He didn’t have a good season for the Yankees

Of course, Paxton’s agent Scott Boras recently said that â€œthereâ€™s a great deal of interestâ€ in the left-hander. But what else is he supposed to say? He is coming off a 6.64 ERA in the shortened 2020 season. He lost several miles off his fastball to start the year, and just when he was starting to get some of his velo back and right the ship, he went down with an arm injury.

Rotoworld speculates that â€œPaxton might be open to accepting a one-year bounce-back type of free agent deal this winter. Or maybe thereâ€™s a strong enough market that he could score high-dollar multi-year offers.â€

NBC Sports Philadelphia reports â€œthere will be plenty of interest in Paxton but heâ€™s more of a buy-low candidate given his rocky 2020 and long injury history. Of course, heâ€™s also represented by Scott Boras, so Paxtonâ€™s next contract probably will not be too team-friendly.â€

Perhaps he can get that multiyear deal after all. But let’s also keep in mind that teams are going with cost-effective moves these days more often than not, and Marcus Stroman recently took a one-year qualifying offer after seeing what was there for him in the market.

The Yankees, as always, should be monitoring his market.