New York Yankees: Weekend preview and all you need to know about your Yankees 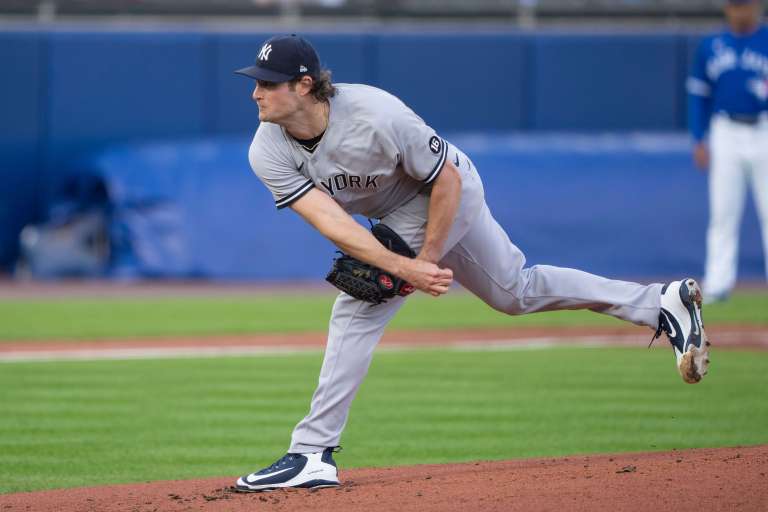 With a pivotal weekend matchup with the Boston Red Sox, here are some New York Yankees previews and notes to keep Yankee fans informed.

Yankee ace Gerrit Cole will face Nathan Eovaldi in Saturday evening’s game broadcast on the Fox Network. Cole is 9-4 with an ERA of 2.68 and an amazing 147 strikeouts. He is coming off a complete-game win against the Astros. Eovaldi is 9-5  with an ERA of 3.66. He has won both of his starts against the Yankees this season.

Sunday evening’s game broadcast on ESPN will feature Jamison Taillon against the Red Sox Michael Perez. Taillon is 4-4 with a 4.90 ERA and is the Yankees’ most undependable starter. Perez 7-5 with a .4.04 ERA.  Perez is coming off an 11-2 loss against the Phillies, giving up 3 runs in 3.2 innings of work.

The New York Yankees and the entire sports world got a harsh reminder that the coronavirus is not behind up. This week, the Yankees had to put six players on the covid list showing that they are not fully protected even though they may have been vaccinated. Aaron Judge, Gio Urshela, Nestor Cortes Jr., Jonathan Loaisiga, Wandy Peralta, and catcher Kyle Higashioka all went on the 10 day Covid list. The loss of these players makes a challenging turnaround for the Yankees even more challenging.

Montgomery gets no run support

After a few rocky starts, Domingo German was scheduled to start Thursday night’s game that ended up being postponed when several Yankees test positive for the coronavirus. Manager Boone decided on Jordan Montgomery to start last night’s game, but German got a chance to pitch. He came in in the 7th inning in relief of Montgomery. He pitched a scoreless inning giving up on hit and no walk, an encouraging sign for manager Boone.

The New York Yankees’ lack of players caused by the coronavirus allowed Yankee minor leaguers to make their Major League debuts. Outfield Trey Amburgey was called up to replace Aaron Judge in right field, where he played flawlessly but struck out in his first two at-bats. Hoy Jun Park also made his debut pinch-hitting. The Yankees also called up Chris Gittens to replace Luke Voit at first.

Starter reliever Micheal King injured his middle finger while working with weights on July 5th and has been away from the team. He said he is feeling better now, throwing and catching. He is hoping to be reactive as early as this weekend, for the Yankees, that will be not too soon as they have lost three relievers to the coronavirus.

Luke Voit is back on the IL

Luke Voit, who has proven he can play through almost anything, must be crushed as he has gone o the IL for the third time this season, this time with a badly bruised knee impeding his running. Voit last season was the baseball’s home run leader, but this year hasn’t played long enough stretches to get his stroke and power back.

The next 11 days will be crucial

The New York Yankees are 9 games back in the AL East behind the Red Sox, Tampa Bay, and the Toronto Blue Jays. They are 5 games out of a second wild card slot. The Yankees must play well in the next 11 days if they have any chance of turning their season around. Unfortunately, they play mostly against teams that they have not been victorious over. They have six games against the Red Sox, three games against the Tampa Bay Rays, with two against the Phillies sandwiched in. So far, they have lost all seven games they have played against the Sox. With so many regular players on the Covid list, a challenging turnaround becomes even more difficult.

Aroldis Chapman still hasn’t got it figured out

The New York Yankees closer Aroldis Chapman and his new splitter went 18 games at the beginning of the season without allowing a run. Since then, his 0.00 ERA has risen to 4.55. Regardless of his splitter, his missile fastball is his put-away pitch, and he has lost control over it. In his last four games, he has given up 9 runs, allowing walks and home runs. In his last two games, his ERA is 13.50. He has pitched so badly that manager Aaron Boone has been afraid to use him, sitting him for ten games.

Last night in a no-pressure situation, Boone decided to send him out in the ninth with the Yankees behind by four runs. Chapman got out of the inning without giving up a run but obviously struggled. He walked one while taking 23 pitches to get out of the inning. Unfortunately, he did not gain any more trust from Aaron Boone. Boone also has fewer options with Nestor Cortes Jr., Wandy Peralta, and his best reliever Jonathan Loaisiga on the Covid list.

Stay with EmpireSportsMedia.com for all the latest Yankees news and updates. ESM’s Columnist William Parlee is a member of the Society for American Baseball Research. Follow him on Twitter @parleewilliam.