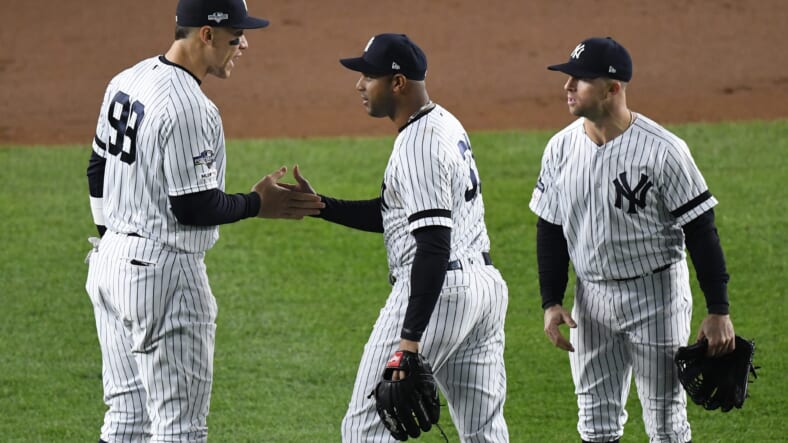 In the 2021 season, the New York Yankees looked to improve their team. They re-signed DJ LeMahieu and brought back Brett Gardner for yet another year. They also hired 2-time Cy Young Award winner Corey Kluber and traded for Jameson Taillon to revamp the pitching rotation. They also made several minor league deals to accomplish their goals. None of the changes fared well. Corey Kluber and Aaron Hicks were out most of the year that saw the Yankees reach the Wild Card game, only to lose it to the Red Sox.

Now, as we approach the 2022 season, the Yankees were mostly inactive in the first part of the postseason. In the lockout, all is at a standstill, but when a new Collective Bargaining Agreement can be reached, the Yankees will have to act quickly to improve the team.

The Yankees, in their glorious history, have had some of the greatest players to play the game of baseball. Players like Babe Ruth, Mickey Mantle, Joe DiMaggio, Yogi Berra, Whitey Ford, Ron Guidry, Derek Jeter, etc. Some were farm-raised, and some were acquired.

For some franchises, paying too much for a player that doesnâ€™t work out can be financially devastating. And it can take a club a long time to recover from that purchase. For teams more flush-like, notably the New York Yankees, those poor choices usually can be recovered from in a short time.

In other cases, a club gives up a prime prospect in a trade to get that player while significantly weakening their farm system when that player turns out to be a bomb.

When acquiring a player, the New York Yankees either have to spend money or trade players or a combination of both to get the player they want. Some have been amazingly successful, like Babe Ruth, Alex Rodriguez, El Duque, Roger Clemens, Roger Maris, Ricky Henderson, and many more.Â  But they also have had some bummers. Today we examine my picks for the Yankeeâ€™s worst acquisitions. I based my picks on how the Yankees performed and how much they had to pay to get the performance or lack thereof.Â  Picks are only from the modern era.

The Last time I wrote this article, Aaron Hicks wasnâ€™t even on the list. But with all the injuries, poor play, and playing in only 32 games last season, he has pushed himself up to number 5 on this list. Also considered is that the Yankees gave him a seven-year extension for $70 million.

When A. J. Burnett came to the Yankees in 2009 from the Toronto Blue Jays, where he had an 18 win season.Â  The Yankee contract with Burnett was for $85.5 million over five years. Burnett was one of those players like Kenny Rogers and, more recently, Sonny Gray that couldnâ€™t adjust to the bright lights of New York Yankee Stadium.Â  In his three years before being traded to the Pittsburgh Pirates, he was 34-35 with an ERA of 4.79.

Pedro Feliciano was a two-year $8 million disaster with the Yankees. There is little to say here.Â  He required two shoulder surgeries after leading the AL with the most starts in the previous three years.Â  For the Yankees, he never pitched a gameâ€”end of the story.

Owen was coming off a career year with the Expos, where he won a gold glove, hit .269, and racked up 24 extra-base hits.Â  He went to the Yankees from the Expos and was so bad at short that he didnâ€™t even complete a year with the Yankees.Â  In 1993 the Yankees were in dire need of a shortstop with prospect Derek Jeter not yet ready.Â  So they paid $7 million for a three-year contract.Â  He hit .234 with a stinking .300 OBP.Â  The Yankees dealt him to the Angels to play out the contract.

If you thought Pavano and Igawa and were bad, Ed Whitson was worse.Â  The New York Yankees acquired Whitson in a five-year deal for $4.5 million from the Padres. For most of his career, he was a near ace pitcher but not for the Yankees.Â  What followed? Fifteen wins and a 5.38 earned run average over two years with the team. They dealt him back to the Padres in 1986, where theyâ€™d fork 90% of his contract the remainder of the deal. The only reason his isn’t higher on this list is that the Yankees didn’t lose many dollars.

The big problem with the Irabu acquisition is that he was supposed to be the next great Yankee ace pitcher. He never even came close to being anything more than a 4th or 5th pitcher in the rotation. In his four years, starting in 1997, he went 29-20, 4.80 ERA, 64 starts, 74 games, 395 2/3 IP. For this, the Yankees had to pay the San Diego Padres $3 million to acquire him and give Irabu $12.8 million over four years.

In 2019, general manager Brian Cashman gave Aaron Hicks a seven-year $70 million contract extension. It was a puzzle why he did it then and remains a puzzle. From 2016 to 2019, Hicks was an average fielder and only slightly above average at the plate. But from 2019 to date, he has been mostly a disaster, spending almost as much time off the field as on. Since the extension, he has played in only 145 games with a .223, 22 HR, 71 RBI, .748 OPS slash line. This past year alone, he hit justÂ  .194 with four homers while driving in only 14 runs, playing in only 32 games due to back soreness and season-ending wrist surgery.

Wow-what a mistake this was.Â  Kei Igawa was a miserable pitcher.Â  The Yankees signed him to a five-year $20 million contract and paid a $26 million Japanese posting fee to get him in the first place.Â  In 2006 Igawa started for the Yankees at the major league level.Â  He was 2-4, 6.66 ERA, 13 starts, 16 games, and 71 2/3 innings for his first two years.Â  He was then demoted to Scranton Wilkes/Barre for two years and the third year with AA Trenton. While in the minors, Brian Cashman tried several times to send Igawa back to Japan, but Igawa refused to go.

Some may wonder why I have Giambi so high on this worst deal list. Itâ€™s not because he wasnâ€™t a decent player because the Yankees paid far too much for a declining player.Â  There is no question that he was a star player for the Oakland Athletics.Â  His 40 points lower batting average with the Yankees did not deserve his $120 million seven-year contract.

While with the Yankees, the first baseman never was a Gold Glover, Silver Slugger, while only being an All-Star once and being nominated for MVP twice, in which he received few votes.Â  In 2004 due to injuries, he missed half the season.Â  Giambi was often a liability at first, leading him to play a lot of games as DH.Â  Oh, and then there was the whole doping thing.Â  After initially denying doing drugs, he admitted to injecting himself with human growth hormone during the 2003 season with the Yankees.

Carl Pavano is a pitcher that many Yankee fans donâ€™t remember, as he was seldom on the mound during his four years $40 million deal. Pavano was a pretty average pitcher for the Florida Marlins until 2004; he had an 18-8 year, came in 6th in the Cy Young voting, and was an All-Star.Â  Based on this, the Yankees decided to take a chance on this break-out pitcher during the offseason. In his first year with the Yankees, he pitched in only 17 games for a 4-6 record and an ERA of 4.77.

His lackluster performance in 2005 was just the beginning things were about to get worse, much worse.Â  In 2006 he didnâ€™t pitch at all due to injuries.Â  In his last two years with the Yankees, he pitched in only nine games between injuries.Â  His record was a dismal 5-2 with an ERA of 5.15. The Yankees were happy to be rid of him.

Without a doubt, in recent memory or Yankee history, the acquisition of Jacoby Ellsbury from the Boston Red Sox was the worst ever buy.Â  And thatâ€™s not only in how he performed. Itâ€™s what they had to pay for him to be away from the team the majority of his Yankee contract.Â  General Manager Brain Cashman is undoubtedly one of the savviest traders and purchasers in the business. But in this case, he missed the mark by a mile, not only in the original contract but how this player turned out.

Ellsbury was a good player for the Red Sox, but his best years were early in his center field career.Â  In 2011 he hit .321 with 32 home runs, and the guy could steal bases.Â  But he would never hit those figures again.Â  On December 3, 2013, Ellsbury and the New York Yankees agreed in principle to a seven-year, $153 million deal, including an option for an eighth year that could increase the contractâ€™s value to $169 million. Mistake number one was that he was never worth this gargantuan contract, to begin with.

Ellsbury never enjoyed the fan praise that Red Sox acquisition Jonny Damon received, primarily due to his performance, which never reached the level that the money spent demanded.Â  In his Yankee employment, in the first four years, he only managed less than 10 home runs a year while hitting a league batting average of .264. Thatâ€™s when a deplorable trade turned into a disaster.Â  In 2018 and 2019, Ellsbury never set foot on the field due to continued injuries, which led many Yankee fans to think he was faking it and just wanted to collect the money and not play.

At the 2021 season, Jacoby Ellsbury was finally off the payroll. Many wonder in the future if Giancarlo Stanton will be on this list. He has never been the player he was in his 2017 season with the Marlins, he is often injured, and his huge contract limits what the Yankees can do with new acquisitions. But, if his 2021 season is any indication of what he can become for the Yankees, he may go from consideration of worst to best acquisitions.

Dishonorable mentions go to Jose Contreras: 4-Years, $32 Million, paid too much for his 1 1/2 years, Kenny Rogers 4-Years, $20 million, ERA 5.12, Pascual Perez: 3-Years, $5.7 Million, drugs only won 3 games, Mel Hall: 4-Years, $4 Million, he kept the Yankees from the 1991 postseason due to his constant arguments with Don Mattingly, and finally Jaret Wright: 3-Years, $21-Million, when he became a Yankee his body fell apart.

Most of the New York Yankee bomb acquisitions have been pitchers strangely, but luckily for the Yankees, they have had far more successful acquisitions, and being a rich franchise has been able to handle those that werenâ€™t.