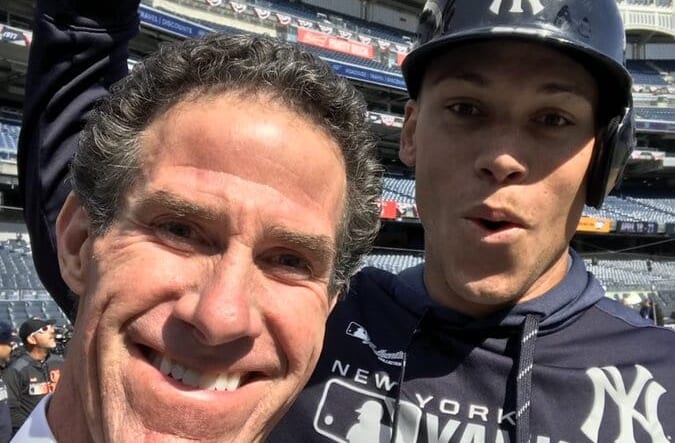 This is another installment of my top 10 New York Yankees series; I give my choices for the top 10 Yankee right fielders of all time.Â  The Yankees, in their glorious history, have many of the best players ever to play in their positions in the history of MLB.Â  Previous installments have featured the top ten first baseman, second baseman, third baseman, and shortstops. With so many good players and different ways of measuring greatness, different writers may have different rankings; these are mine.

Aaron Judge has only played for the Yankees for five years but has racked up a batting average of .272 with 268 runs driven in and 119 home runs, plus another 11 long balls in postseason play. Considering his excellent stats, his defense is even better.Â  He has a rocket of an accurate arm, making many difficult plays look easy.Â  In future years he could easily rank considerably higher on this list.Â  The only thing that might prevent that is his frequent injuries. 2017 was his best year with the Yankees; his injuries have prevented him from greatness since then.

Many Yankee fans may not know the name of George Selkirk, but he played for the New York Yankees between 1934 and 1942, playing his entire career for the Yankees. Selkirk was an excellent fielder and hit a .290 batting average for the Yankees with 576 runs batted. His fielding percentage was .976, which was excellent for that time.

Gary Sheffield could have been higher on this list. However, he only played three years with the Yankees. Sheffield was a menacing figure at the plate. In his three years, he hit .291 with 269 RBIs and 76 home runs. Sheffield, like Aaron Judge, had a cannon for an arm. He made spectacular plays, often hitting the right-field wall. He had a remarkable 22-year career in the outfield. He played for the Yankees between 2004 and 2006.

Hanke Bauer is often an underrated right fielder. He played for the Yankees between 1948 and 1959. During that time, he hit .277 with 654 runs batted in and 158 long balls. He was one of the Yankeeâ€™s most contact hitters of his time. In 12 years with the Yankees, he hit an average of 110 hits a year for a total of 1326 hits. He was a five-time MVP candidate during the span.

Lou Piniella was one of the most popular New York Yankee players in the 1970s and â€™80s. He spent eleven years with the Yankees hitting .295 with 417 RBIs. Piniella was not a home run hitter but had 971 hits in his Yankee tenure. He was a magnificent arm in the outfield. Piniella had a vast knowledge of the game and went on to be the Yankee manager from 1986 to 1987. He also managed the Mariners, Cubs, Rays, and the Reds. He returned to manage the Yankees for the second time in 1988.

Roger Maris is a famous Yankees often overrated due to his record 61 home runs in 1961. What is overlooked is that he was an outstanding right fielder. His fielding percentage was .978. He hit .265 with 541 runs batting while getting 203 home runs. He was an MVP in the right field and an MVP in centerfield as well in 1961. He is one of the very few Yankees to win the MVP award several times. Maris, who came from the Athletics but his seven years with the Yankees, were his best years. After leaving the Yankees, he quickly faded away.

The hulking Dave Winfield was another Yankee that was a fan favorite. However, he didnâ€™t have the best relationship with the New York Yankeesâ€™ primary owner George Steinbrenner and regularly fought with him. Winfield came to the Yankees from the San Diego Padres in 1981 and hung around until 1990. During that time, he hit .290 with 818 runs batting in and 205 home runs. His 1300 as a Yankee was part of a career that produced 3,110 hits. While with the Yankees, he was an All-Star eight times and a five-time Gold Glover in right-field. Dave was a first-ballot inductee into the Baseball Hall of Fame.

George Steinbrenner, who was not shy when spending money, reached out into the new free-agent market and acquired Reggie Jackson from the Baltimore Orioles for just short of $3 million in 1976.Â  Jackson would later say:

â€œIt was like trying to hustle a girl in a bar,â€ the flamboyant Jackson said about Steinbrennerâ€™s efforts after he signed a fiveâ€year contract with the Yankees said to be worth $2.9 million. â€œSome clubs offered several hundred thousand dollars more. possibly seven figures more,â€ but the reason Iâ€™m a Yankee is that George Steinbrenner outhustled everybody else.â€

It was a cheap buy for Steinbrenner as Jackson turned out to be Georgeâ€™s best purchase.Â  However, Jackson was a controversial player with the Yankees; some loved him, some hated him.Â  That includes manager Billy Martin, catcher Thurman Munson, and Steinbrenner himself.Â  There were often fights for power amongst the three.Â  He always wanted to be in the spotlight in dugout fights with Martin and his hitting three homers in one game.

Regardless of what negative views fans of others had of him, he deserved the praise.Â  During his five years with the New York Yankees, he hit .281 with 144 home runs.Â  He had a 900 OPS.Â  He also had a .980 fielding percentage in right field for the Yankees.Â  Reggie was elected to the Baseball Hall of Fame in 1993.

Paul Oâ€™Neill is unsung and unrewarded as a Yankee right-fielder, and many sportswriters would put him down a few notches on this list. But this writer feels he is one of the best players ever to grace the right-field at Yankees Stadium.Â  His batting average of .303 over nine years with the Yankees speaks for itself.Â  He hit for power, he hit for contact, and he was the ultimate team player.Â  He consistently did what was needed to help his team.

Oâ€™Neill played for the Yankees from 1993 to 2001; he was part of four Yankee World Series Championships and contributed to them. During his time, the â€œWarriorâ€ had 858 RBIs and hit 185 home runs while hitting nearly 1,500 hits.Â  Paul will probably not reach the Hall of Fame for his lack of home runs, but he owned the fans for his time with the Yankees.Â  In his last game as a Yankee in 2001, it was the ninth inning; from the entire stadium, all you hear for the whole inning was â€œPaulieâ€ clap, clap, clap, clap, Paulie, clap, clap, clap, clap.

Since retiring from baseball, he has become an integral part of the YES Network, broadcasting and analyzing Yankee games.

There is not enough space in this article to talk about the achievements of Babe Ruth; he is not only my pick for the best New York Yankee right-fielder but the best baseball player ever.Â  In what was called the worst trade in baseball history, Boston Red Sox owner Harry Frazee, being short on money, traded Babe Ruth away to the Yankees for $100,000 the day after Christmas in 1919.

Ruth would spend the next fifteen years with the Yankees.Â  Over the period, he had a batting average of an incredible .349, with 659 home runs.Â  There was no other hitter like him then and since then.Â  He had a fielding percentage that averaged .965, which for that time was very good.Â  Ruth was an All-Star and a most valuable player back when awards werenâ€™t as common as they are today.Â  Being a pitcher for the Red Sox, he even pitched to a winning percentage of 1.000 with a record of 5-0.

In his 15 years with the Yankees, Ruth helped the team win seven American League (AL) pennants and four World Series championships.Â  In 1936 Ruth was elected into the Baseball Hall of Fame as one of its â€œfirst fiveâ€ inaugural members.