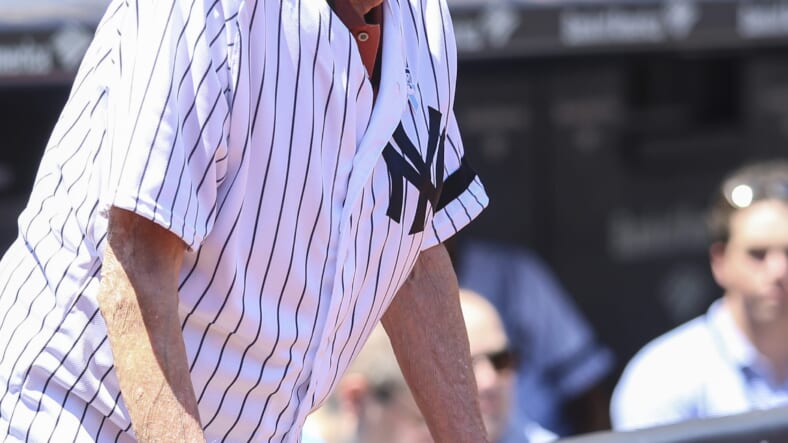 In the glorious history of the New York Yankees, magic moments are littered across a history spanning 107 years.Â  Fantastic players, great coaches, controversial managers, and owners have created a past filled with storylines.Â  For fans, nothing is more exciting than the no-hitter, unless its the very seldom seen perfect game.Â  Here we will examine the top 10 perfect and no-hitter games in Yankee history.

September 4, 1923. Jones’s no-hitter was against the Philadelphia Athletics, which later became the Kansas City Athletics and is now the Oakland Athletics.Â  The score was 2-0.Â  What makes this game unusual is that Jones never recorded a strikeout in the entire game.Â  The only baserunners were a walk in the first and an error in the eighth inning. Jones had a 21-8 season. He led the New York Yankees to their first-ever World Series.

July 4, 1983. Dave Righetti was one of the most popular of Yankee pitchers.Â  His no-hitter occurred against the Boston Red Sox in a 4-0 victory for Billy Martin’s Yankees.Â  Righetti is the only reliever on this list to achieve a no-hitter while being a reliever for the Yankees.Â  He was originally a starting pitcher before the Yankees converted him.Â  It was not unusual for him to start a game.Â  On the day of his no-hitter, Yankee owner George M. Steinbrenner celebrated his 53rd birthday.

May 14, 1966. Just like Monte Pearson had the first no-hitter in Yankee Stadium, Dwight Gooden has the distinction of having the last non-perfect no-hitter thrown by a Yankee in the Old Yankee Stadium. His game for Joe Torre was a 2-0 victory over the Seattle Mariners.Â  Joe Girardi and Wade Boggs scored the two runs for the Yankees.

July 12, 1951. Alli Reynolds’s no-hitter was tied for the smallest margin of victory in a no-hitter, and the only shut out. George Mogridge had a one-run margin in a game against the Red Sox at Fenway Park, although a run was scored due to an error.Â  Reynolds’s game was a 1-0 win against the Cleveland Indians for manager Casey Stengel.

August 27, 1938. Monte Pearson’s no-hitter had the distinction of being the first-ever no-hitter in the history of Yankee Stadium.Â  His game for manager Joe McCarthy was with the Cleveland Indians, a game that the Yankees won by a landslide 13-0.Â  It is also the New York Yankees widest margin of victory in a no-hitter or perfect game.

September 28, 1951.Â  This no-hitter is the second of Reynolds’s career, and he is the only Yankee to have multiple no-hitters.Â  He is one of six pitchers to have more than one no-hitter in a season (Johnny Vander Meer, Virgil Trucks, Nolan Ryan, Roy Halladay, and Max Scherzer).Â  This no-hitter was an 8-0 victory over the Boston Red Sox.

September 4, 1993. Jim Abbott’s no-hitter rises to the top of the no-hitters list as Jim Abbott is the only pitcher in all of baseball to ever have a no-hitter while having just one hand. Abbot, despite being born with just one hand, learned baseball and pitching.Â  His career was an average one for any pitcher, but on this one day, he made pitching history by no-hitting the Cleveland Indians 4-0.Â  New York manager Buck Showalter would call the feat historic.

July 18, 1999.Â  David Cone recorded the last no-hitter for the New York Yankees.Â  It was the third perfect game in Yankee history and the 16th in MLB history.Â  It was also the first no-hitter in interleague play.Â  In an odd coincidence, it happened on Yogi Berra Day at Yankee Stadium, with both Yogi and perfect game pitcher Don Larsen viewing in the stands.Â  The game was between the Yankees and the Montreal Expos.Â  The Yankees won the game 6-0.Â  It was the second perfect game under the tutelage of manager Joe Torre.

May 17, 1998.Â Â  David Wells’s perfect game was the 15th in MLB history.Â  It was the second perfect game in Yankee history and the first since 1956. Wells admitted that he pitched the game while suffering a massive hangover.Â  Wells was one of the more colorful of Yankee pitchers.Â  His game was against the Minnesota Twins, a game the Yankees would win 4-0. It was also the first no-hitter during Joe Torre’s management.

October 8, 1956.Â  Don Larsen was a pretty average pitcher that would rise to heights never before seen in baseball history.Â  During the 1956 World Series, Larsen would pitch the very first perfect game in a World Series.Â  His feat is still the first for the baseball history books. The game was the sixth perfect game in MLB history.Â  It happened in Game 5 of the World Series between the New York Yankees and the Brooklyn Dodgers (now the Los Angeles Dodgers).Â  The 2-0 win was the third no-hitter during Casey Stengel’s managership and the only perfect game. The game also produced one of the most icon baseball photos ever taken.Â  When the game was completed Yankee, catcher Yogi Berra jumped into the arms of pitcher Don Larsen.

The New York Yankees are the only team to have a perfect game in a World Series.Â  The Yankees have won more no-hitters against the Cleveland Indians that any other team (3).Â  The Yankees have the widest margin win than in any other no-hitter.Â  Joe Torre has the most perfect games of any baseball manager. The Yankees won the first-ever perfect game at the Boston Red Sox’s Fenway Park.Â  The first-ever no-hitter was accomplished by the American Association League’s Louisville Eclipse’s team on September 11, 1882.Â  The last no-hitter in MLB was on September 1, 1999, for the Houston Astros. Â  Possibly New York Yankee pitcher Gerrit Cole can update that stat in favor of the New York Yankees in 2020.