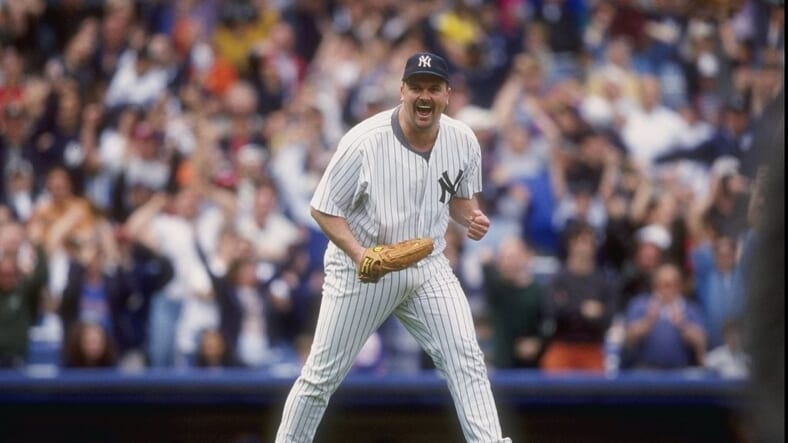 17 May 1998: David Wells #33 of the New York Yankees celebrates during a game against the Minnesota Twins at Yankee Stadium in the Bronx, New York. Wells pitched a perfect game and the Yankees defeated the Twins 4-0.

In my New York Yankees top 10 series that has covered most aspects of Yankee baseball, today we take a look at the top 10 Yankee acquisitions in the modern era.Â  These acquisitions come from both signings and trades.Â  The Yankees have had many star players that were homegrown but also at times had to look outside their farm system to fill various needs.Â  Owner George M. Steinbrenner was the first owner to make big moves and set the tone for acquisitions for the future.Â  This has been the most difficult to complete top 10s so far.Â  I am sure many will disagree with the placements.

Henderson was one of the longest-tenured players, playing for 25 years, 5 of them with the Yankees.Â  During his five years, he stole 326 bases, making him the all-time base stealer for the Yankees. During the span, he hit .288 and had 78 home runs while having an excellent fielding percentage in all areas of the outfield.Â  He was an All-Star every year he was a New York Yankee.

CC Sabathia was instrumental in the Yankees winning their last World Series in 2009.Â  Sabathia came to the Yankees from the Milwaukee Brewers. In his eleven years with the Yankees, he had a record of 134 and 88.Â  During the Yankees years, he was a workhorse always giving his best effort for a win.

Brian Cashman brought Masahiro Tanaka to the Yankees from the Eagles of the Japanese league in 2013 in a seven-year contract that will end this season, whether there is one or not. During his time with the Yankees up to this year he is 75-45 with a 3.75 ERA. Tanaka has never had a losing season with the Yankees.

The highlight of David Wells’s career was his perfect game on May 17, 1998, the tenth no-hitter in Yankee history.Â  Wells for the Yankees was 34-14 in his two-year stint, that’s a .706 winning percentage one of the best for the Yankees. Wells pitched 21 years all in the American League.

Wells was quite a character that didn’t care much for rules.Â  He has admitted he pitched his perfect game while nursing a bad hangover. In 1998 he would help the Yankees with his 18-4 record and propelled them to the World Series shut out of the San Diego Padres.

Yankee owner George M. Steinbrenner made Reggie Jackson the highest-paid baseball player at the time when he hired Jackson from the Baltimore Orioles. Jackson was a controversial player as he was a bit of a show-off and Manager Billy Martin didn’t want the Yankees to hire him.Â  It didn’t help when he was quoted as saying “I’m the straw that stirs the drink” a phase that he never said, but caused a rift with Yankee catcher Thurmon Munson.

Jackson in his five years with the Yankees had many memorable moments including his three home runs that caused him to be called “Mr. October.” In 1977 in the sixth game of the World Series against the Los Angeles Dodgers, New York Yankees outfielder Reggie Jackson hit three home runs off three consecutive pitches from three different pitchers. Jackson batted .284 with 144 home runs while a Yankee.

On this list, Mike Mussina is the one player that often flew under the radar. Mussina after being a Baltimore Oriole star pitcher became a New York Yankee.Â  In his eight years with the Yankees he never had a losing season winning 10 or more games every year.Â  Mussina was not only an outstanding pitcher but he was an excellent defender as any pitcher to ever grace the mound.

On some writer’s top 10 lists they don’t even include Mussina.Â  For the Yankees he was Mr. Steady being one of the Yankee’s most dependable pitchers during his time with the Yankees.Â  The highly intelligent Stanford grad, with a thinking pitcher that adjusted to every situation.Â  His performance never diminished with age. In the last year of his career he had his first 20 win season, becoming the oldest pitcher to have a 20 win season.

For his pitching with both the Baltimore Orioles and the New York Yankees on January 22, 2019, he was elected to the National Baseball Hall of Fame and Museum, receiving 76.71% of the vote.Â  Mike has the distinction of being the first American League pitcher to win ten or more games in each of 17 consecutive seasons

Alex Rodriguez is a controversial New York Yankee to say the least.Â  Many fans cite his use of performance-enhancing drugs while with the Texas Rangers and tend to ignore his performance with the Yankee club. But the facts are still the facts.Â  During his 22 years playing the game he was one of the best in either league.

For his 12 years with the Yankees, he hit 30 home runs a year, with 1,100 RBIs while hitting .283. He was a seven-time All-Star and a seven-time MVP candidate, winning the prestigious award twice.Â  He would be a first-ballot inductee into the Baseball Hall of Fame if it was not for his drug use which most likely will never come to fruition.

I have to admit that I am a writer that does not place as much importance on drug use as many writers do.Â  My stance is that dozens if not hundreds of other players used some type of doping during that period that were never caught, thus many stats for that period may be in question.Â  In the case of Rodriguez, his career wouldn’t have been less impressive even if he hadn’t made the bad decision to break the rules.

Paul O’Neil played for only two teams in his baseball career, nine years with the Yankees in the second half of his career.Â  At the end of the 1992 season the Red traded O’Neill outright for Yankee outfielder Roberto Kelly. In his first year, he batted .311 with 20 home runs and 75 RBIs.Â  O’Neill played with such vigor that owner George M. Steinbrenner would give him the nickname the “Warrior” which stuck.

In his second year he got the AL batting title batting .359.Â  If O’Neill missed a hit he thought he should have gotten, batting racks and water coolers often felt his wrath.Â  Stick Michael made the trade that would change the face of the Yankees for years to come.Â  Paul made amazing plays in defending the right field. He played fiercely and hurt, he was the ultimate warrior the Yankee fans loved.

The acquisition of Roger Clemens was one of the best the New York Yankees ever made. In 1996 the Yankees sent Graeme Lloyd, David Wells, and Homer Bush to the Toronto Blue Jays for their ace pitcher Clemens. In his first year with the Yankees he helped them win the 1999 World Series. In 2000 he almost single-handedly took them again to the World Series with his 20-3 season.Â  The Yankees would win that series as well. Clemens was never fully embraced by Yankee fans due to his long tenure with the Boston Red Sox.

Also in 2000 Roger would win the prestigious Cy Young Award at the age of 38.Â  Roger is one of the longer tenures pitchers in baseball, pitching for 24 years.Â  With the Yankees he would win twice as many games as he lost.Â  He went 83-42 in his six years with the Yankees for a .664 winning percentage.Â  It is outrageous that this 3 time Cy Young Award isn’t in the Hall of Fame.Â  This year he received 72.5% of the votes compared to the 75% needed to be inducted.Â  He has two years left of eligibility.

Babe Ruth isn’t a modern era Yankee acquisition but must be included in the list as the best move the Yankees ever made in procuring him from the cash strapped Boston Red Sox.Â  Following Ruth becoming a Yankee, he transformed himself into a great hitting outfielder. He really made his name with the Yankees as one of the best if not the best player to ever play the game of baseball.

Gerrit Cole could not be included for the Yankee top 10s as he hasn’t thrown a ball for the Yankees in the major leagues.Â  He however has to be mentioned as he may be in the future proclaimed one of the best Yankee acquisitions in history, only time will tell.

EmpireSportsMedia.com’s Columnist William Parlee is a member of the Society for American Baseball Research.Â  Follow me on Twitter @parleewilliam.