New York Yankees Top 10’s: A history of great center fielders, is your favorite on the list? 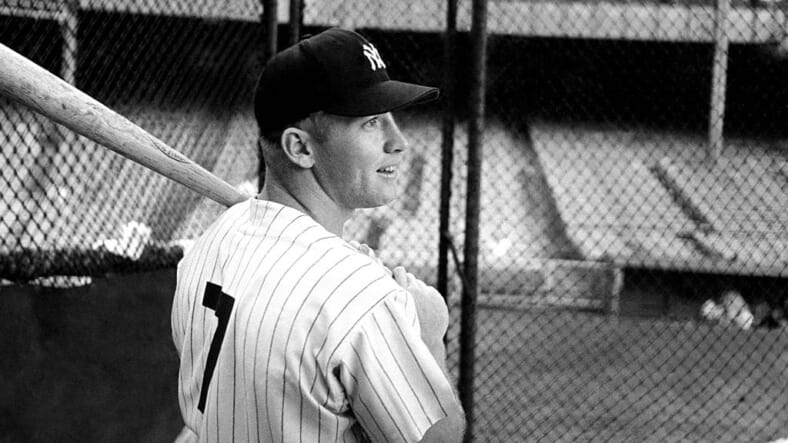 The New York Yankees in their 109-year glorious history have had their share of great baseball players.Â  From Babe Ruth to Joe DiMaggio to Ron Guidry, Derek Jeter, and dozens more, some of the best baseball players in history have graced Yankee Stadium.Â  Iâ€™ve dealt with the pitchers, catchers, baseman, and right fielders in my other top ten columns.Â  In this installment, I will attempt to identify the great Yankee centerfielders.Â  With so many great centerfielders, some writers will differ in the order of their preferences.Â  Here are this writerâ€™s top 10.

Curtis Granderson would have been higher on this list, except his tenure with the Yankees was limited. Granderson played centerfield for the New York Yankees from 2010 to 2013. 2011 was one of the best years of his career. He scored an incredible 139 times and drove in 119 runs while stealing 25 bases. He was an All-Star, came in 4th in the MVP voting, and was a Silver Slugger.

Hideki Matsui is another Yankee player the might have scored higher in this ranking if he had played solely in centerfield.Â  His time with the Yankees was shared with left-field in the last years of his career as a DH.Â  Matsui was a great contact hitter and shined at important moments.Â  In his seven-year career with the Yankees from 2003 to 2009, he drove in over a hundred runs a year four of his first five years. During his Yankee career, he hit .292.

Had Ricky Henderson played his entire 25-year career with the Yankees and had only played in centerfield, he would be closer to the top of this list, but he shared it with eight other teams in both leagues.Â  With the Yankees, he in five years had 326 stolen bases while hitting .288 and driving in 255 runs.Â  If it wasnâ€™t for his stolen bases, he might not be on this list at all.

Mickey Rivers spent four years with the New York Yankees.Â  Rivers was a hugely popular Yankee with a cannon for an arm.Â  He had a fielding average of .985. He was either an All-Star or an MVP candidate every year he was with the Yankees.Â  The best years of his 15-year career were with the Yankees.Â  He stole nearly 100 bases and batted .299.Â  Few players could cover as much grass in center and run the bases as fast.

Bobby Murcer is one of the most popular of New York Yankees in the last fifty years.Â  Murcer played two stints with the Yankees, the first one from 1965 to 1974 and again from 1979 to when he ended his playing days in 1983. Murcer was a complete baseball player who shined in important moments.Â  With the Yankees, he hit .278 with 687 runs driven in.Â  He also hit 275 home runs.Â  On the day of Thurmon Munsonâ€™s funeral, he came back to the Stadium and almost singly won the game that night.Â  After his playing days, he would broadcast from the Yankee booth for sixteen years. The five-time All-Star died of brain cancer at the age of 62.

Many sportswriters would put Brett Gardner further down this list, mostly due to his somewhat low batting average of .260. In his 12 years with the Yankees, Brett Gardner has been one of the most consistent players on the team, always on the edge of greatness.Â  Few Yankee players have left their guts on the field in every game.Â  This do-or-die player puts everything he has into every single game and is the heart and soul of the team.Â  His mentorship to younger players was never more evident last season when the club endured a historic number of injuries.Â  Gardner, through example, led many minor league replacements to greatness.Â  In his twelfth year as a Yankee, he had one of the best seasons of his career, hitting 28 home runs while having an incredible .992 fielding percentage in centerfield. Gardner has accrued the fifth-most WAR in Yankees center field history. He has long been an unsung stalwart of the team. He is also the only present player on this list. Below you will see some of the fantastic plays he has made.

Most Yankee fans are not familiar with Earl Combs.Â  Combs played for the Yankees between 1924 and 1935.Â  It should be noted that the top five players on this list have played at least 12 years with the Yankees and are generally considered not only Yankee greats but some of the best players to ever play the game.Â  Combs in his 12 years with the Yankees compiled a .325 batting average, and in five of his years, he batted over .342.Â  He also had a .970 fielding percentage in centerfield.Â  Combs contributed to teams that won the World Series three times during his career. This baseball Hall of Famer nearly averaged 200 hits a year while striking out an average of only 31 strikeouts per season.

One of the most beloved Yankees is Bernie Williams who graced centerfield from 1991 to 2006.Â  In his 16 years, all as a New York Yankee, he compiled a .297 batting average with 1257 runs batting in a while hitting nearly 300 home runs.Â  One thing fans enjoyed was that Bernie was a doubles machine.Â  Bernie was a five-time All-Star, a six-time MVP candidate, and was awarded the Golden Glove award four times for his defense in centerfield. Bernie Williams contributed to four Yankee World Series wins. Â  Williams was such a good player that early in his career, Yankee owner George Steinbrenner three times considered trading Williams for other star players to plug holes in the team. Still, luckily for Yankee fans, none of those trades came to fruition.Â  On September 21, 2008, Williams made his first return to Yankee Stadium since 2006 for the ceremonies preceding the final game at the stadium. He was the last former player to be introduced and received a standing ovation that lasted a minute and 42 seconds.Â  In 2015 Bernie Williams was rewarded a plaque in Monument Park.

With the top two on this list, we step into rarified greatness.Â  Joe DiMaggio is one of the greatest players to ever play the game.Â  Joe was nicknamed the â€œClipperâ€ and â€œJoltinâ€™ Joeâ€ spent his entire 13 years career as a Yankee.Â  DiMaggio is best known for his 56-game hitting streak (May 15â€“July 16, 1941), a record that still stands today.Â  His career batting average of .325 with 361 home runs is among the best in baseball.Â  He spent his entire career in centerfield at Yankee Stadium. Baseball fans remember him as a Yankee legend and cultural icon of the era. His nine World Series rings trails only Yogi Berra in team history, and his number 5 is immortalized in the Baseball Hall of Fame and the Yankeeâ€™s Monument Park. Being one of the more colorful players of his time, he is also known for his failed marriage to Marilyn Monroe.

DiMaggio was a thirteen-time All-Star and a twelve-time MVP candidate winning the coveted award three times.Â  Many baseball analysts believe that if he hadnâ€™t missed three years in the heart of his career while in the military that his career would have been even better.Â  They also cite that the 457-foot left-center field fence in the old Yankee Stadium robbed DiMaggio of more home runs than any other player in history.

If the last four on this list leapfrog the bottom five, Mickey Mantle leapfrogs Joe DiMaggio as the second greatest Yankee in history next to the famed Babe Ruth. Mantle played centerfield at Yankee Stadium for eighteen years from 1951 to 1968.Â  Over his career spent entirely as a New York Yankee, he had a .298 batting average and hit 536 home runs and 1,676 runs scored.Â  The sixteen-time All-Star also was an MVP nominee 14 times.Â  He was the MVP in 1956, 1957, and again in 1962. Most sportswriters regard Mickey Mantle as the greatest switch-hitter in baseball history.

Here are a few more interesting facts about the â€œMickâ€.Â  He hit two or more home runs in World Series games twice. He hit an unbelievable ten Grand Slams and hit six inside the park home runs, five in the old Yankee Stadium and one against the Chicago White Sox in the old Cominsky Park.

EmpireSportsMedia.comâ€™s Columnist William Parlee is a member of the Society for American Baseball Research. Follow me on Twitter @parleewilliam