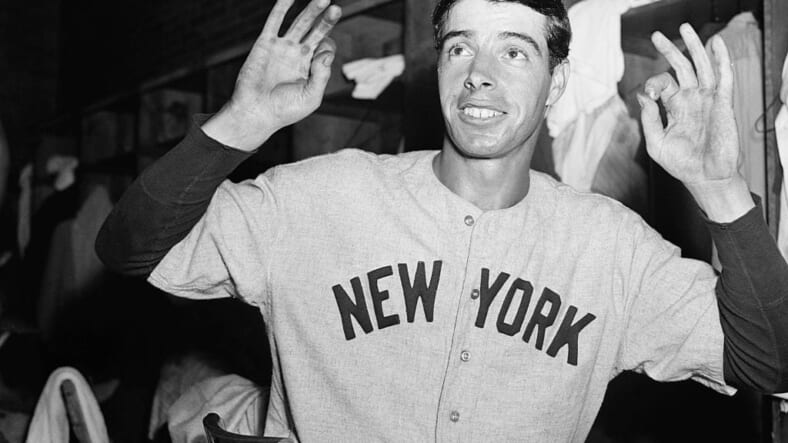 (Original Caption) 7/18/1941-Cleveland, OH: Joe DiMaggio, slugging outfielder of the New York Yankees, makes a pair of "duck eggs" with his fingers to indicate that for the first time in 57 consecutive games he has gone hitless. The end of the amazing series of hit games came against the Cleveland Indians at Cleveland yesterday. DiMaggio went to bat four times, failed to get the ball past the infielders three times and walked once. His record of hits in 56 consecutive games is expected to stand for many moons.

For the New York Yankees, some days in Yankee lore are more interesting than others. Today happens to be one of those days.

1941:Â  Joe DiMaggio in his career, received many award accolades, and broke several records. Besides having the most home runs for a rookie, he also had the most home runs in his first two years, a record not broken until 2009. Joe’s record could have been even better, but Yankee Stadium left-center field back then was 457′.

1961: Roger Maris and Mickey Mantle both hit home runs in a game against the Baltimore Orioles.Â  This was the midpoint in the famous home run race between the two sluggers. It was Maris’s 36th and Mantles 34th, but both homers were erased due to rain that canceled the game before it became official.

1978: Another fight occurred between slugger Reggie Jackson and New York Yankee manager Billy Martin. On this day, Martin ordered Jackson to hit away.Â  Jackson ignored him and bunted.Â  Martin furious suspended Jackson as the team sank 14 games back.Â  But harm no foul, the Yankees came all the way back and won the World Championship from the Los Angeles Dodgers.

1987: “Donnie Baseball” Don Mattingly, on this day in 1987, becomes the first AL player to hit a home run in seven consecutive games when he goes deep in the Yankeesâ€™ 8-4 win in Texas.

2018:Â  In the Midsummer Classic All-Star game, the American League defeated the National League, 8-6, at Nationals Park. A record 10 home runs are hit, five from each team. The gameâ€™s first by The New York Yankee’s Aaron Judge off hometown starter Max Scherzer. The Astrosâ€™ Alex Bregman earned MVP honors as the AL wins its sixth straight Midsummer Classic. Interestingly this year’s opening day will be at Nationals Park against that same Max Scherzer. Will Aaron Judge repeat the for the New York Yankees?