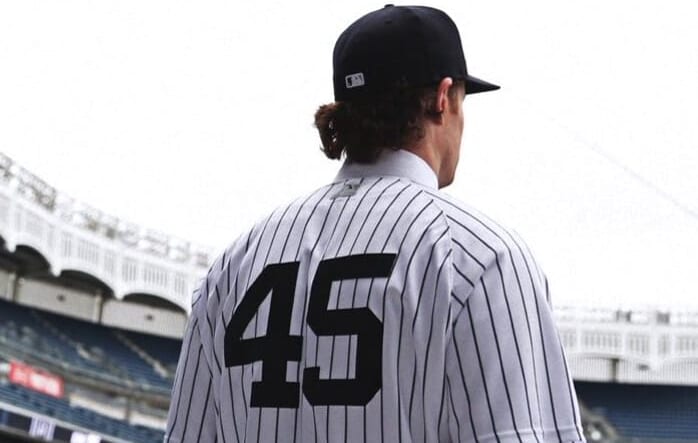 Today the New York Yankees will open a 3 game series with the Kansas City Royals at Yankee Stadium in the Bronx. On the mound for the Yankees will be Gerrit Cole, the to-date poster boy for the use of sticky substances while the pitcher gets a better grip on the ball. Yesterday MLB started checking pitchers for such substances in earnest. Pitchers around the league were randomly checked. The video below shows the New York Mets ace Jacob deGrom being checked between innings. The checks apparently will not interrupt the game or delay the game as they will be done between innings or as the pitcher leaves the mound.

Just like in the steroid era, this new situation is being called the “sticky” era, and New York Yankee pitcher Gerrit Cole is in the middle of it after being named in a lawsuit for using substances and be called out by Josh Donaldson of the Minnesota Twins. Today at the Stadium, Cole will face the Royal’s Brady Singer, a right-hander 3-5 with an ERA of 4.76. You can be sure both pitchers will be checked at some point during the game. Below is more detail on the push to get foreign substances out of the game and Cole’s involvement.

ESPNâ€™s Jeff Passan reports, â€œMajor League Baseball is expected to announce today (June 14th) that it will suspend players caught with any foreign substance for 10 days with pay to help curtail the widespread use of grip enhancers by pitchers around the league.â€

“The league is expected to distribute a memo to teams â€¦ that outlines its plans to penalize all players caught by umpires with any foreign substance on their person, from the widely used sunscreen-and-rosin combination to Spider Tack, an industrial glue that has become a favorite among pitchers who want to generate more spin on the ball.â€

According to Passan, the ban â€œwill begin in earnest June 21.â€ There is a reason that Cole could become a poster boy for the crackdown as he has been named yet again regarding using sticky substances to improve his pitching. This time by Minnesota Twins third baseman Josh Donaldson.

New York Yankees ace Gerrit Cole is one of several star pitchers named in a lawsuit for using illegal ball-doctoring substances provided by a former visiting Angels clubhouse manager, per an article in Sports Illustrated.

Brain â€œBubbaâ€ Harkins was fired in March of 2020 by the Los Angeles Angels after an investigation stated that he had been helping pitchers with the use of illegal ball-gripping substances. In January of this year, he filed a lawsuit against MLB and the Angels. The filing follows an attempt by the Angels and MLB to dismiss Harkinsâ€™ previous motion claiming defamation.

Harkins named multiple pitchers in his lawsuit that apparently used his â€œconcoctionsâ€ to increase the ability to improve grip on the baseball when pitching. Among those mentioned were Justin Verlander, Felix Hernandez, Max Scherzer, and the Yankeeâ€™s Corey Kluber and Gerrit Cole. In addition, several Angels pitchers were also named.

Before the first game of the (June 8) Minnesota series at Target Field, the normally outspoken Josh Donaldson was having a public conversation on the use of illegal substances and went out of his way to single out Gerrit Cole. When the New York Yankees arrived at Target Field, there was a video conference about the 3 game set with the Yankees. Gerrit Cole responding to reporter questions as to if he ever used Spider Tack (a particularly sticky paste to improve grip), Cole stumbled in answering. This is how he responded:

â€œI donâ€™t knowâ€¦.. I donâ€™t knowâ€¦.. I donâ€™t quite know how to answer that, to be honest.â€ That was followed by a long pause and he continued: â€œThere are customs and practices that have been passed down from older players to younger players, from the last generation of players to this generation of players, and I think there are some things that are certainly out of bounds in that regard.

â€œThis is important to a lot of people who love the game, including the players in this room, including fans, including teams, so if MLB wants to legislate some more stuff, thatâ€™s a conversation that we can have. Because ultimately we should all be pulling in the same direction on this.â€

After those comments, New York Yankees fans donâ€™t know any more than they did before the comments. It is reasonable to assume that Cole, like many other pitchers, uses some substances at times to improve their pitching. Whether those substances are legal or not is a discussion to have with MLB.

Last weekend, Buster Olney of ESPN reported that pitchers would be checked repeatedly and randomly by umpires for illegal substances under a new program being advanced by MLB.

In third baseman Donaldsonâ€™s wandering comments in which he mentioned Cole, he stated that Coleâ€™s spin rate reduced dramatically after four minor league pitchers were suspended for using foreign substances. Donaldson suggested that Coleâ€™s pitches werenâ€™t rotating as much and that Cole was suddenly trying to hide his use of sticky substances to avoid being caught in the crackdown.

Sidestepping the accusation on Tuesday, and said: â€œMy spin rate dropoff was due to mechanical flaws. I attribute it to just not being as good or as sharp as I wanted to be. Itâ€™s as simple as that,â€ Cole said. The Baseball Savant website stated the MLB Statcast data showed that Cole had a 125 rotations per minute decrease last week when he allowed five runs to the Tampa Bay Rays.

â€œIâ€™m just not quite bringing out my best delivery. Of course itâ€™s something that we monitor. Of course there are other variables that we monitor as well when weâ€™re evaluating our performance from every game. You try to take as much information as you can as a player, and certainly thatâ€™s one of them,â€ Cole said. â€œWeâ€™re trying to get better this week and put in the work, and Iâ€™ll be as prepared as I possibly can for my next start.â€

Cole had nothing to say about Donaldson, but he let his pitching speak for itself. One would have to believe Cole, with the accusations, certainly would not have been using anything illegal. In three plate appearances against Cole, Donaldson flew out and struck out twice, with Cole glaring in at him with each strikeout.

In a recent Sports Illustrated article, they explained over the past two or three years, pitchersâ€™ illegal application to the ball of what they call â€œsticky stuffâ€â€”at first a mixture of sunscreen and rosin, now various forms of glueâ€”has become so pervasive that one recently retired hurler estimates â€œ80 to 90%â€ of pitchers are using it in some capacity. The sticky stuff helps increase spin on pitches, which increases their movement, making them more difficult to hit. Thatâ€™s contributed to an offensive crisis that has seen the league-wide batting average plummet to a historically inept .236. (Sports Illustrated spoke with more than two dozen people; most of them requested anonymity to discuss cheating within their own organizations.)