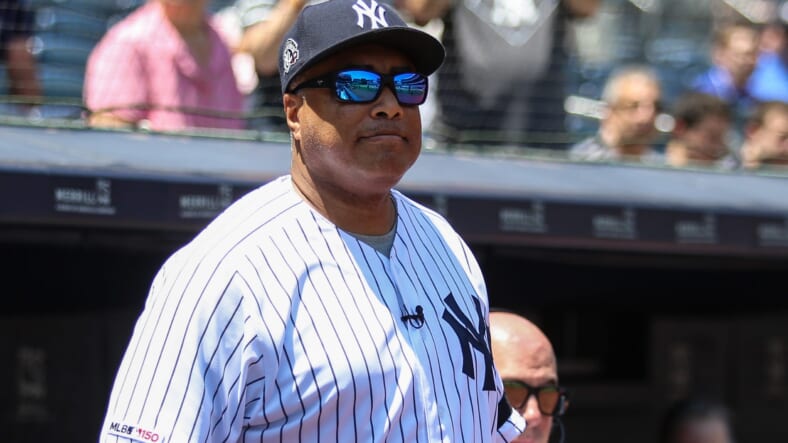 Yankee pitcher helps himself. Rookie Russ Van Afta shuts out the Senators 16-0 while hitting 4 for 4. the 26-year-old ended his rookie season 12-4 with a .283 batting average in 67 at-bats.

The New York Yankees’ winningest ever pitcher Jack Chesbro wins his first game of the season at American League Park, the Washington senators’ home. The Highlander right-hander would go on that season and win 41 games, creating a pitching record that still holds today.

The legendary Joltin Joe DiMaggio joined Babe Ruth, Lou Gehrig, Miller Huggins, and Mickey Mantle with a monument at Yankee Stadium, only the fifth New York Yankee to do so. Unfortunately, DiMaggio had died a month earlier. As part of the celebration, singer-songwriter and life long Yankee fan Paul Simon took to the field to sing Mrs. Robinson; the lyrics included “Where have you gone Joe DiMaggio, a nation turns its lonely eyes on you.”

Eleven games into the season, Roger Maris hits his first home run of the season in a 13-11 victory over the Detroit Tigers. Maris would go on to his 61 iconic home runs that season, still a Yankee record.

New York Yankee Alex Rodriguez hit a home run that day in his first plate appearance; He would do the same in his next two at-bats, becoming only the 11th major leaguer to have 10 or more RBI’s in one game, just one shy of Tony Lazzeri’s feat (11) in 1936.

Yankee right-hander Ivan Nova fails to tie the franchise mark of 16 consecutive wins established last season by Roger Clemens when he doesn’t get a decision in the team’s 7-6 victory over Detroit.

The New York Yankees fire Yogi Berra after the team got to a 6-10 start. The Yankees brought back Billy Martin for a fourth stint as manager. George Steinbrenner broke his promise not to fire Berra causing a rift between Berra and the Yankees that lasted 14 years before the elder Steinbrenner apologized to Berra and celebrated Yogi Berra Day at Yankee Stadium.

The legend Lou Gehrig came to the plate and hit a single. The 2,721st hit of his career and his last. The record endured for 70 years until Derek Jeter broke the record in 2009. ALS debilitated Gehrig; he died two years later of what was named Lou Gehrig’s disease.

Lou Gehrig plays his last game as a New York Yankee; he went hitless in a loss to the Washington Senators. This day would end his 2,130 consecutive games played. He would end his 17-year career with aÂ  lifetime batting average of .340 with 490 home runs.

Mariano Rivera ties the record for the most consecutive saves at a home park with 51 saves. He also moved ahead of Roger Clemens for 10th all-time, with 1,015 strikeouts.

Bernie Williams becomes only the second player in New York Yankee history to hit 6 hits in a single game. On this day, he would go 6 for 8 in an extra-inning contest at Orioles Park at Camden Yards. The Yankees were victorious, winning the game 11 to 6.

Amid loud boos, Alex Rodriguez blasts a 3-0 fastball over the Green Monster for his 660th career home run, tying Willie Mays for fourth on the all-time home run list. Willie Mays congratulated A-Rod, saying that “milestones are meant to be broken. I wish him continued success throughout his career.”