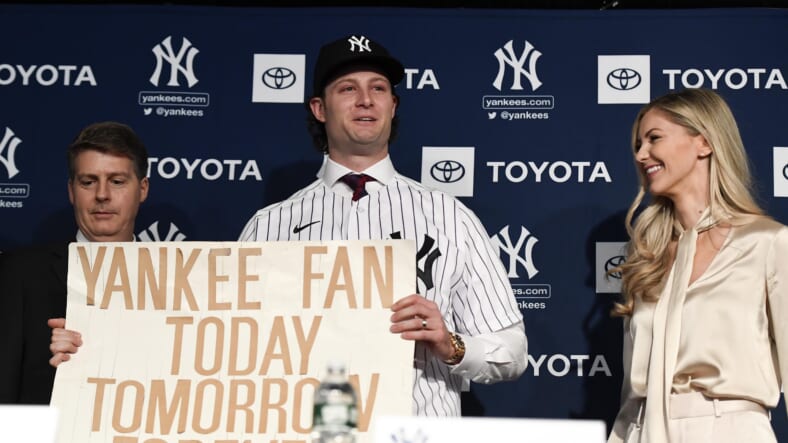 Dec 18, 2019; Bronx, NY, USA; New York Yankees pitcher Gerrit Cole, center, holds the sign he was photographed holding at the 2001 World Series as a kid as he poses for photos with Hal Steinbrenner, left, and his wife Amy during a press conference at Legends Club at Yankee Stadium. Mandatory Credit: Danielle Parhizkaran-USA TODAY Sports

New York Yankees general partner and owner Hal Steinbrenner spent $324 million to see Gerrit Cole in a Yankee uniform and pitching for the Yankees, at Yankee Stadium. Cole, 30, was born on September 8, 1990, in Newport Beach, California, to Mark and Karen Cole. Cole’s father was from New York and a Yankee fan. His father would tell him stories of Lou Gehrig and other famous Yankees, and the young boy would quickly become a baseball fan and Yankee fanatic.

Now, tonight Cole will try to show Steinbrenner and company that they made a good investment. Games like this are the exact reason the Yankees wanted Cole.Â  Cole is 16-8 record, an ERA of 3.23, and an incredible 243 strikeouts. So far, with the Yankees, he is 23-11 with a 3.11 ERA in two seasons. Cole has pitched to the Red Sox four times this season, with the Yankees losing two games. Cole is coming off a loss to the Toronto Blue Jays when he gave up five runs in six innings of work. He hopes to turn it around tonight, dominate the Red Sox, and propel the Yankees into the divisional series.

More on how Cole got to tonight’s game. On weekends one could see the young Cole playing baseball at local ball fields, playing any position so that he could play. His father certainly nurtured Cole’s interest in the Yankees by flying him across the country seven times to Yankee Stadium to see his idols, Mariano Rivera, Derek Jeter, and Andy Pettitte. Cole was a member of the Tustin Western Little League team of Newport Beach.

In 2001 his dad would take the young Cole to the World Series in Arizona to see his favorite Yankees play. The eleven-year-old could be seen in the stands with a Yankee uniform and cap on while holding a sign saying “Yankee Fan Today, Tomorrow, Forever.” Being a lifelong Yankee fan had to, in some way, sway him to being the pitching Ace for a club he loved all his life? The signing of Cole is not the first time Cole and the Yankees have interacted. The Yankees drafted Cole in 2008, but Cole decided to attend college at UCLA. They were also outbid by the Pirates for Cole when he got out of college.

Cole attended Orange Lutheran High School and played on the team as a pitcher. In this sophomore year, he once pitched 45 innings without allowing a run. In his junior year, his fastball reached 94mph. At the start of his senior season, fifty baseball scouts would attend his opening start. He would go 8-2 that season with a .047 ERA while striking out 121. The Yankees would select Cole in the first-round draft in 2008, but Cole would attend college instead.

Cole’s introduction to college pitching at UCLA would be a bit rude, as he faced more talented players. He would go 4-8 with an ERA of 3.49. His next year would be more successful as he went 11-4, with an ERA of 3.37 with 153 strikeouts. In 2011 Cole would sign with the Pittsburgh Pirates. Cole attended spring training in 2012 but was optioned to the Bradenton Marauders of the Florida State League. Cole pitched to a 2.90 ERA before being promoted to the Indianapolis Indians, a triple-A Pirates minor league team. There he would go 5-3 with a 2.91 ERA in twelve starts.

Injuries on the Pirates would cause Cole to be brought up to the majors; he made his MLB debut on June 11, 2013. In his first appearance, he struck out his first batter in just three pitches. In the game, he would also get his first hit. He gave up two earned runs in the game but got his first win as a major league pitcher. He would hit his first home run on Sept. 7, 2014, his second on August 26th, and his third for the Pirates, on May 26, 2016, a three-run blast into the visitor’s bullpen.

Once interviewed by David Laurila, he would ask Cole what his hitting approach is; Cole would answer, “I try to get early contact and keep it on the ground. I like to keep the ball down as much as I can. Strikeouts are something that just happens. You don’t go for strikeouts because your pitch count gets too high. When you get that opportunity, you have to put them away with whatever is working that day. That’s the approach I’ve always had to have. I’ve got to keep my pitch count down. If you want to go deep into ballgames, you have to stay under that 100 mark.”

Cole is a fearless monster on the mound and attacks hitters. He is durable and goes deep into games, something that will rest the Yankee bullpen. In his short career, he has been an All-Star three times, been an MVP nominee twice, and voted for the Cy Young Award three times, coming in second in the voting this past year.

Although he has turned out to be the New York Yankees winningest pitcher, he doesn’t seem to be the dominant pitcher he was for the Houston Astros last year. He appears to have struggled at times, even in the games that he has won. Also, Cole has given up home runs; lot’s of them. He has given up a home run in every one of his starts. The Yankees have lost the last four games that Cole started. In those games, Cole gave up eight home runs while walking nine hitters. In 2019 he was 21-5 with an ERA of 2.51; last year, his earned run average was considerably higher at 3.64.

One would have to assume that this crazy baseball season and its broken-up spring training may have something to do with Cole’s performance. There is another possibility, could he be another great pitcher to come to the Yankees and flop? A.J. Burnett is the most recent overpaid pitching bust for the New York Yankees. He was not the first, the Yankees have had over a dozen premier pitchers to come to them in the last 30 years that couldn’t cut it in New York.

Since manager Aaron Boone has matched him up with his battery mate, catcher Kyle Higashioka, the Yankees have won five in a row at one point and pitched to an ERA of just 1.32. If the New York Yankees get all the way to the World Series, Cole could start six or seven games for the Yankees, although some would be on short rest.Â  In his one postseason start so far last year, he was totally dominating, beating the Cleveland Indians, pitching seven strong innings with 105 pitches, allowing just two runs while walking no one, and racking up 13 strikeouts.Â  Striking out 13 hitters while issuing no walks has only been done by one other baseball player, and he was Tom Seaver in 1973.

In one of the most important games he will play, he faces the Boston Red Sox at Fenway Park in Boston. It’s the 2021 Wild Card game. Cole will face the Red Sox’s Nathan Eovaldi in the 8:08 pm EDT contest. On September 24, he gave up seven earned runs over 2.2 innings of work in the Yankees sweep of the Red Sox at Yankee Stadium. Buckle up fans it will be a hard-fought match by both teams.

When he became a Yankee, Cole and his family moved to Greenwich, CT, a suburb of New York. The 6’4â€³ Cole is married to his wife Amy, who he met as a softball player at UCLA. His brother-in-law is Brandon Crawford of the San Francisco Giants. He and his wife love to cook and entertain family and friends. Cole is a healthy cook and a nutritional nut. Amy has a blog called “the Culinary Experience”. The two gave birth to a son earlier last summer. Cole has a younger sister Erin.