New York Yankees: The top ten moments that made the 2019 Yankee season outstanding 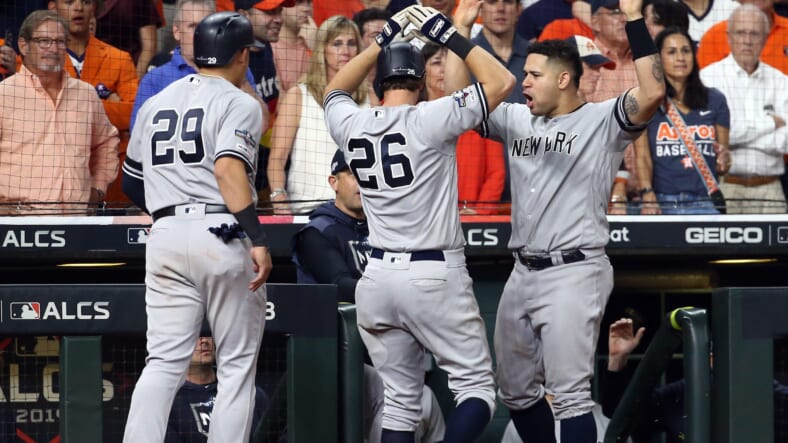 First, let me give an honorable mention to the London Series when the New York Yankees swept the Boston Red Sox in the historic series at the London Stadium in the United Kingdom. Highlights include the 9 run seventh inning that created the sweep of the rival Red Sox.Â  Although there was a lot of hype about the series,Â  I didn’t include it in the top ten as the games were relatively meaningless, other than Yankee bragging rights.

The 2019 season for Brett Gardner was one of his best ever. The 11-year veteran Yankee player played throughout the season as he found himself everywhere in the lineup with DJ LeMahieu taking his leadoff position in the lineup. Brett hit a career-high 28 home runs, his previous high was 21 in 2017. During the year on April 17, hit his 100th home run in grand fashion with a Grand Slam that allowed the Yankees the 5-3 win over the Red Sox.

Gleyber Torres had a breakout season in 2019 hitting 38 home runs while hitting .278. All this while filling in most of the season at shortstop replacing the injured Didi Gregorius. He was an All-Star and an MVP nominee. The highlight of his year was when he made history on August 12, when he hit a 2 run homer against the Orioles. Torres made MLB history with his 5th multi-home run vs any team in a season.

The New York Yankees signed CC Sabathia in 2009 and he helped them with a 19-8 record that brought the New York Yankees their last World Series win in 2009. He followed that campaign with a 21-7 season in 2010. He had seven winning seasons with the Yankees. He retired after an incredible 19 years as a pitcher. The highlight of his 2019 season and his entire pitching career happened on April 30th when he got his 3,000th strikeout. It was in a game against the Arizona Diamondbacks, the strikeout was against former teammate John Ryan Murphy.

In 2019 no moment in the season was more important than game six of the 2019 ALCS. If the Yankees won the game they would have gone on to a tie-breaking seventh game, and possibly on to a 28th World Series Championship. It was the ninth inning facing elimination on the tenth pitch to DJ LeMahieu, he got a two-run homer off Astros closer Osuna tying the game at four. Yankee fans were elated until at the bottom of the inningÂ  Jose Altuve got a two-run homer off Aroldis Chapman, causing the Yankees to lose the series.Â  After the season it was learned that the Astros may have cheated in the series.Â  Although they were never punished for it MLB found them guilty for cheating in the 2017 Yankee ALCS loss.

#6 Back to back walk-offs against the Athletics

On August 31st in an eleven inning dual against the Oakland Athletics, DJ LeMahieu hit a walk-off home run for the Yankee 5-4 win.Â  Gary Sanchez hit two homers in the game.Â  On the following night, Mike Ford made Yankee history when manager Aaron Judge asked him to pinch-hit in the ninth inning.Â  With the game tied at 4 for the second night in a row, Ford slammed a 394′ home run to become the first Yankee rookie pinch hitter to accomplish the feat.

#5 Aaron Hicks’ homer in game 5 in the ALCS at Yankee Stadium.

#4 Mike Ford and Brett Gardner go back to back.

In a September 1st game against the Oakland Athletics going into the ninth inning the New York Yankees were behind 3-0 at the bottom of the seventh.Â  The A’s scored again in the top of the eighth.Â  At the bottom, the Yankees came to within one.Â  At the top of the ninth, the A’s didn’t score, setting up one of the most dramatic moments of the season. Facing a loss Brett Gardner came to the plate and homered to tie the game.Â  Mike Ford followed in with a booming walk-off home run.

During game two of the 2019 ALDS against the Minnesota Twins.Â  The Yankees had a seven-run third inning at Yankee Stadium.Â  Shortstop Didi Gregorius was responsible for driving in four of those runs when he approached the plate in the inning and hit a Grand Slam homer off Twins reliever Tyler Duffy.

In what was one of the most spectacular defensive plays of the New York Yankee season centerfielder Aaron Hicks made one of the greatest plays of his career.Â  It was the top of the 10th, and the Yankees had just gone ahead in the game at the Twins Target Field.Â  The Twins were set up to win with two on at the bottom of the 10th when Max Kepler walked to the plate with two outs.Â  With Adam Ottavino on the mound, Kepler blasted a line drive to center.Â  Hicks made a flying leap to catch an uncatchable ball for the Yankees win.Â  At the top of the ninth, he had just hit a two-run homer to give the Yankees the lead.Â  At the bottom of the tenth Kepler hit his line drive with two outs.Â  The drive came to Hick with amazing speed, Hick leaped and flew through the air and made the unreal catch as he slammed to the ground breaking the brim of his cap.

#1 Yankees win the division for the first time in seven years!

Setting the mood, on September 19, 2019, the New York Yankees had just learned that ace pitcher Domingo German had been placed on administrative leave by MLB for an alleged violation of the domestic violence rule. That evening just hours later, the Yankees were set to meet the Los Angeles Angels, after missing a chance to clinch just the night before.Â  Masahiro Tanaka was on the mount. The game wasn’t much of a game on the Angels part.

DJ LeMahieu hit a go-ahead, three-run homer for yet another big moment in his first year with New York and old mainstay Brett Gardner homered and had three RBI.Â  The Yankee would go on to win their 100th game of the season, and clinch the American League title for the first time since 2012. The Yankee player met near the mound for understated handshakes and body bumps but avoided the dogpile and possible injuries.Â  The Yankees celebrated in the on the field and in the clubhouse with the traditional champagne.