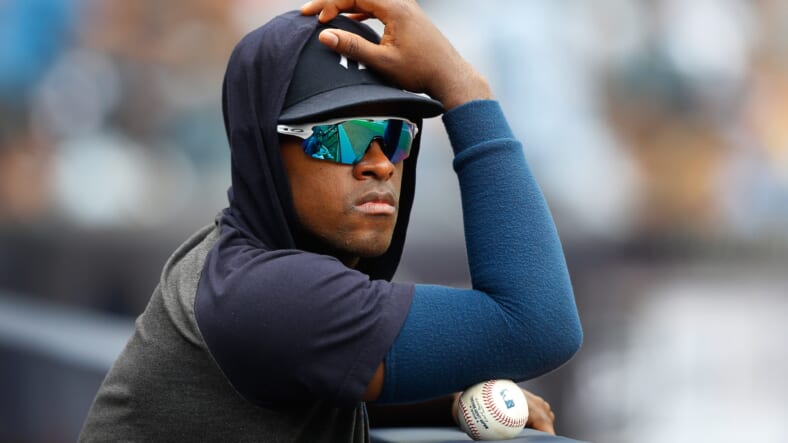 The New York Yankees have had injuries in the spring and before, but have been relatively free of serious injuries that will keep players off the field for prolonged periods. The only serious injury is Luis Severino that was caused by his Tommy John Surgery at the beginning of last season. Here is a breakdown of the injuries and the latest updates for New York Yankee players and when fans could expect them back with the team.

On February 27, 2020, Luis Severino underwent Tommy John surgery to repair his elbow. At the time, it was projected he would be away from the team until late summer 2021. That would include a few minor league rehab starts. But recently, manager Aaron Boone has updated his progress, say that he is doing better than expected in his rehab. Boone has actually caught a session from Severino. He is now expected to be back with the team sometime in mid-July.

Third baseman and outfielder Miguel Andujar has minor hand and wrist soreness that will keep him away from the team at the beginning of the season and with a difficult-to-diagnose injury, possibly beyond. After his poor showing in spring training, when he does come back, he will most likely be sent down to Scranton and won’t be used unless injuries require him.

The loss of last year’s baseball home run leader is one of the most significant injuries so far in the spring. Voit had knee surgery yesterday in New York. It was first noticed when he had trouble running the bases. An MRI revealed a partial meniscus tear. He is expected to be away from the team at least until the middle of May.

Left-hand pitcher Justin Wilson was supposed to partially make of for the loss of Zack Britton; he left a March 22 outing with shoulder soreness and tightness. An MRI did not find any serious injury. He is on Anti-inflammatories but will miss the beginning of the season, which is on Thursday of this week. Wilson is progressing nicely and doesn’t want to be in the IL; however, general manager Brian Cashman announced yesterday that he would start the season on the 10 day IL. He will probably return when that expires.

It was discovered that left-hand reliever Zack Britton has a bone chip in his elbow. He underwent surgery to have it removed on March 15. There is conflicting information on when fans may expect him to return. Some say six weeks; others say two to three months. Based on the worst-case scenarios, he will be back with the team sometime before the end of June. CBS Sports reports that he won’t be back before May 28th.

Backup outfielder Mike Tauchman is suffering from a mild self-inflicted injury. Tauchman fouled a pitch off his lower right leg, near his calf, during an eight-pitch at-bat against Phillies starting pitcher Zack Wheeler on Sunday. He is presently icing it down and taking anti-inflammatories. The injury is minor, but his readiness for opening day is questionable.

The news on Clarke Schmidt’s elbow injury is not good. He experienced an extensor strain in his right elbow; it’s a common ailment and not long-term serious. Manager Aaron Boone said Thursday that Schmidt’s return to throwing could be “imminent.” However, no matter how minor, he will have to build back up for season play, and he is expected to be out until May 31 after being put on the 60-day IL on Saturday.

Fans were wondering why Aaron Judge was not in yesterday’s New York Yankee’s game after also missing the game before. The good news is that there is nothing seriously wrong with the slugger. He is under the weather. He has gone through the COVID health protocols and has passed those. Both general manager Brian Cashman and manager Aaron Boone said he would be ready to start the season on Thursday. Other sources say that is questionable.