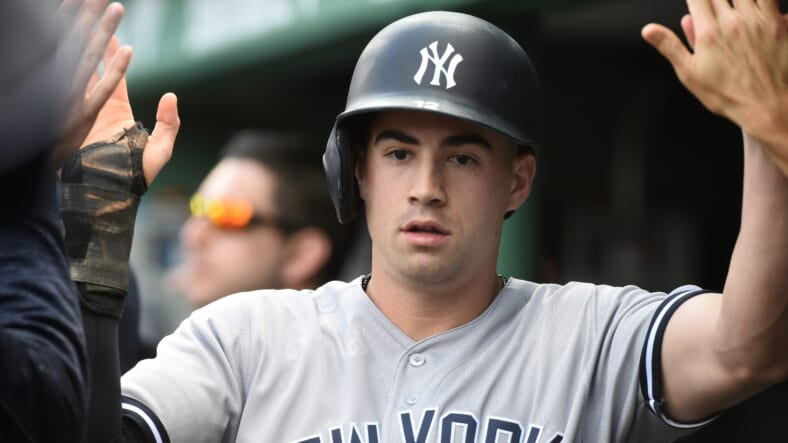 After winning 11 games in a row, the New York Yankees entered the Oakland Coliseum to face the Athletics with the hope of getting their 12th consecutive win. But at the same time, they also knew that they hadn’t played well at the massive coliseum, winning one game of their last then there. Nevertheless, they went on to blow a six-run lead but still score that 12th win.

A game filled with firsts

Let’ start with the second inning; with Joey Gallo at the plate, home plate umpire Todd Tichenor called Gallo out on strike, on one of the worst calls I’ve seen recently. It was so bad the usually calm Gallo argued. Manager Boone darted from the dugout to save his slugger from getting thrown out, only to get thrown out himself. Again, the call was egregious, being clearly six inches inside in the computer graphic.

The New York Yankees, although blowing a six to nothing lead in the top of the third inning, still found a way to win the game in the ninth inning via pinch-runner Tyler Wade, who scored on an Aaron Judge single that held up. It was the first time the Yankees have won 12 games in a row since 1961. It was also the first time they won 71 games by a 1 or 2 run margin at this point of the season.

In the bottom of the ninth inning, shaky or not, Aroldis Chapman got the 300th save of his career.

By the top of the third inning, the New York Yankees had amassed a six-run lead going 6-0 against the Oakland Athletics. Both Giancarlo Stanton and Brett Gardner homered in the second inning. Then, in the third inning, Joey Gallo hit a three-run bomb giving the Yankees the 6 run lead.

But in the third inning starter, Jameson Taillon, who has been stellar, recently gave up back-to-back home runs. Then loaded the bases causing Taillon to be yanked after just 3.2 innings. Walks will usually bit a pitcher in the butt. Taillon got bit and then walked a run in. The usually dependable Albert Abreu came in and reloaded the bases. Starling Marte ground out to second to end the inning and get Abreu out of the jam.

Clay Holmes just off the Covid list, and Jonathan Loaisiga combined for three scoreless innings before the Yankees called in Aroldis Chapman to close it out.

Aroldis Chapman gets the job done

With the score of 6-5 at the top of the ninth inning, Giancarlo Stanton hit a single; he was replaced on the bases by the fast Tyler Wade as a pinch-runner. Wade stole second and, on an errant throw, went to third. Aaron Judge singled to center, scoring Wade for the one-run lead in what was to be the winning run. Fans in the stands and at home saw both Chad Green and Aroldis Chapman warming up. With the fan’s nerves on edge, it turned out to be Chapman who would close. Chapman has been unreliable in close games.

Andrus flew out to Gardner in center. Canha struck out. Marte singled and stole second. Finally, Olsen who had 32 home runs on the season, ground out to second, and Yankee fans could exhale. It was the Yankeeâ€™s 12th win in a row, the most since 1961.

Note: Tonight at 9:40 pm EDT, New York Yankee ace Gerrit Cole will take the mound for the Yankees and will face Sean Manaea, as the Yankees got for their 13th win in a row. The game will be televised on the YES Network and NBCSCA.