New York Yankees: Strasburg should be a priority over everyone else 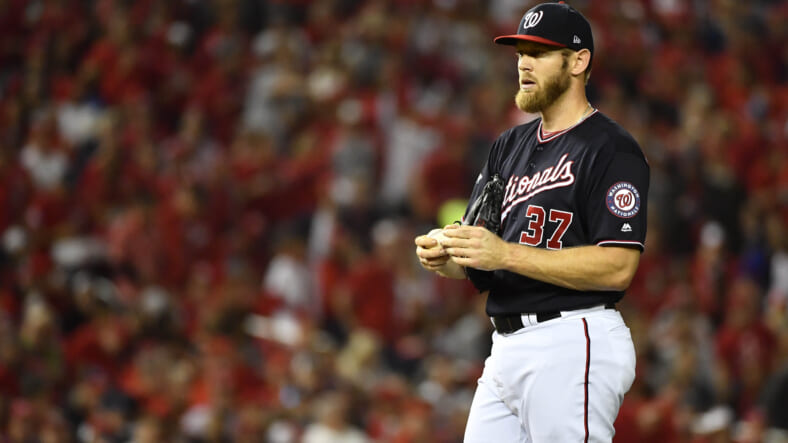 The New York Yankees and general manager Brian Cashman has already made it clear that they aren’t holding back this offseason and are going to pursue the top free agents in terms of pitching. The top options are Gerrit Cole, Madison Bumgarner, and Stephen Strausburg.

Don’t get me wrong, any of these guys being added to the Yankee rotation would be a blessing. However, Strasburg seems like the best option for the Yankees.

After opting out of his contract with the Washington Nationals, Strasburg is coming off a wild 2019 season after winning the World Series and is most likely looking for a big contract probably around nine figures. Good news for the Yankees, they can pretty much afford any contract.

Finishing with an 18-6 record on the year and credited to a strong 3.32 ERA, Strasburg is everything the Yankees want in a pitcher. He hasn’t been the flame-throwing starter ever since he got Tommy John surgery but still works his fastball in the mid-90s while flashing a curveball, change, sinker, and a slider.

Another appealing thing about Strasburg is he’s done good work in the postseason, credited to a 1.46 ERA and a 6-2 record. Not to mention, he was named 2019 World Series MVP.

In my opinion, I believe Strasburg would make a good fit in pinstripes. The Yankees have everything a premier pitcher could want: playoff contenders, the ability to pay, etc.

The only negative thing I can see the Yankees hesitating on is Strasburg’s injury history. After last season, the Yankees are definitely going to want to steer clear of any potential injury barriers. Strasburg has dealt with some arm trouble, but ever since his surgery, he’s been a consistent dominant pitcher.